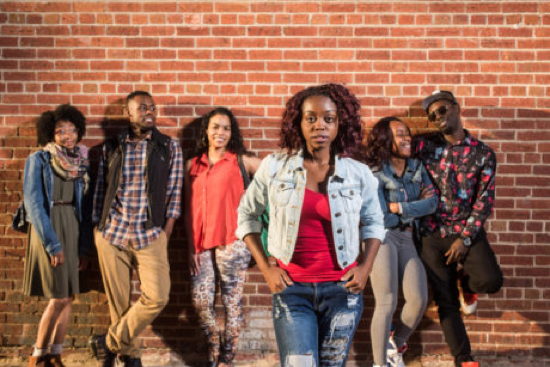 Kirsten Greenidge’s play focuses on a 16-year old named Annie who has just entered a pregnancy pact with her two best friends. However, she slowly sees that maybe there is a way to break the cycle and that she can get out of her neighborhood and do more with her life. Jennifer L. Nelson directed this story gracefully and digs into some very heavy issues with sprinkles of humor throughout.

Kashayna Johnson played the role of Annie. She wonderfully captured the joy of youth and longing to grow up but also fearful for the future. This girl is under a great deal of pressure and Johnson’s performance is desperately heartbreaking.

…this story gracefully and digs into some very heavy issues with sprinkles of humor throughout.

Her mother, Myrna, is illiterate but dreams of being a novelist. Although only appearing in a couple of scenes, Deidra LaWan Starnes performed the role with poise and power giving a stirring portrayal of everything that Annie is afraid of becoming. The audience feels a combination of pity and respect for this mighty woman.

Annie’s two best friends are played by Renee Elizabeth Wilson and Ghislaine Dwarka. Wilson plays the more rebellious and brash Talisha while Dwarka plays the gentler Margie, who is the first to get “PG.” The three friends have a strong bond and the chemistry between these actors was palpable. Wilson especially captured the fury of a young woman desperate for someone to love her for who she is. Her strength in pressuring her friends, bullying Keera, and standing her ground after her older boyfriend has beaten her was amazing and Wilson embodied that strength.

Tyasia Velines plays Keera, a young religious girl struggling with her own family troubles who befriends Annie along the way. Annie finds joy in Keera’s presence, even if she is a little quirky. Velines’ small stature and boundless energy make her a source of warmth in the show. Throughout the production, Velines seems to be the bouncy little ball of hope but then flips that coin when she finally tells Annie about her home life. Her performance was heartfelt and gut wrenching.

There are also strong males in the play. Annie wants Malik to be the father of her baby. He is an ambitious young man who is going to do whatever it takes to get out and  Vaughn Ryan Midder tackles this role well. He shows the audience an awkward but determined boy and that is what drive everything he does on stage. The other man is Antwoine, an equally passionate tattoo-artist, played by Jeremy Keith Hunter. He is the voice of wisdom and is a wildly talented artist. Hunter’s performance was one of humor and fortitude.

The set design, by Luciana Stecconi, was beautiful and multilayered. As part of Mosaic’s Accessibility Initiative, surtitles have been incorporated into the design so that audience members from the Deaf community can enjoy the show as well. This means that every performance of “Milk Like Sugar” and their upcoming production of “Hooded: Or Being Black for Dummies” is accessible. They received a grant from the Weissberg Foundation to make their initiative possible. Projections were designed by Gregory Towle.

Running Time: 1 hour and 50 minutes with no intermission.