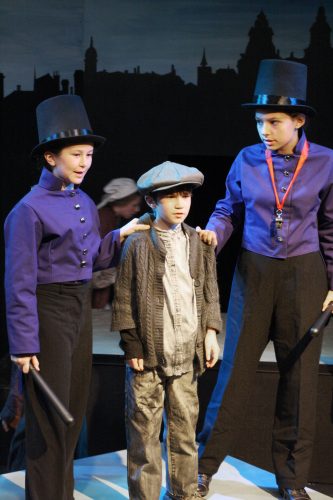 James Durham as Oliver Twist with members of the Learning Theatre Ensemble.

Stepping into the performance space of the Creative Cauldron, audience members are greeted with the sights and sounds of Charles Dickens’ London. The city looms on the set’s backdrop as a painted, silhouetted skyline. Simulated sounds of roaring wind feel darkly energetic, a feeling which perhaps also best describes this original musical adaptation of “Oliver Twist.”

The production, which debuted in 2012, was adapted and directed by Laura Connors Hull and Ellen Selby. In the program notes, Ms. Hull promises to depart from what she sees as the hyper-sentimentality of the story’s most famous incarnation, “Oliver!.” Whether you have seen previous adaptations or not, in this “Oliver Twist” you can find moving drama, captivating musical performances, and an overall fantastic night at the theatre.

Based on the Charles Dickens novel of the same name, “Oliver Twist” follows the titular character, an orphaned child, as he escapes the workhouse and journeys through Victorian England. As in many Dickens stories, he is tossed between kindly benefactors and dastardly villains, eventually making his way to London and becoming ensnared by the master of thieves, Fagin.

“Oliver Twist” is a spirited, innovative production of solid performances that can and will be enjoyed by the whole family.

The success of the show is due in large part to the veteran creative team. Laura Connors Hull and Ellen Selby streamline the lengthy novel into a fast-moving script that retains the emotional range of the story. Matt Conner provides compelling music that complements Stephen Gregory Smith’s sometimes darkly comic, sometimes melancholy lyrics. The kinetic opening number, “Scraps,” immediately raises the energy and sets the tone for the show as the orphaned children confront the audience with the fact that “we’re just scraps, tossed off after dinner.”

The younger cast are part of the Learning Theatre Ensemble, whose mission is to foster young performers by partnering them with professional actors. The results are a very successful collaboration that allows everyone onstage to shine. Even during large ensemble pieces like “London Towne,” adult voices do not overpower the clear, developing vocals of juvenile cast members.

The acting is similarly excellent. Will Mark Stevenson and Judy Butler delight in multiple roles throughout the show, and Mr. Stevenson’s Fagin is convincingly menacing. Oliver, as played by Owen Thiebert, gives a strong performance, registering fear, anger, and sadness as the story unfolds. Hazel Fedstein’s turn as Nancy is notable, and her rendition of the cynical ballad “Cheers” is impressively confident.

The actors and story are supported by a remarkable design team. Maggie Jervis’s costumes feel authentically Victorian, while John Sami’s atmospheric lighting underscores, but does not overwhelm, the emotional texture of each scene. Matt Conner’s choreography makes effective use of the intimate theatre; young performers move on and off stage seamlessly. As they move, the actors take turns narrating the story, reflective of the show’s stylistic choice to view the story “through the lens of a contemporary graphic novel.” These narrations, which sometimes accompany a tableau of un-moving actors, are effective at condensing the plot and making the many twists and turns accessible to young theatre-goers. The substantial number of children in the audience remained interested and attentive from the sad beginning to the happy ending.

After the show, there is a Q and A session with the entire company. This was an equally fun and engaging part of the night where audience members, especially children, could ask about the technical aspects of theatre, as well as the behind-the-scenes education of the Learning Theatre Ensemble. One young individual asked if there were songs in the original novel. There were not, of course, but I certainly enjoyed the ones in this production, as I enjoyed the adaptation’s ability to honor Dickens’ darkness and hopefulness, all while remaining deeply entertaining. “Oliver Twist” is a spirited, innovative production of solid performances that can and will be enjoyed by the whole family.

Running Time: One hour and 15 minutes, with a 15-minute post-show Q and A session.

Norah is a writer and editor. She was a teacher for six years, four of which were spent in South Korea. While she will always miss having kimchi on demand, she is happy to be closer to family. She also enjoys dance, graphic design, and BBC dramas.