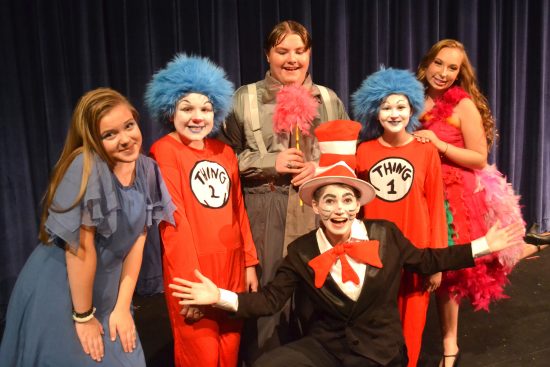 Some of the cast of “Seussical” at Children’s Theatre of Annapolis. Photo provided by Kelsey Casselbury.

“A person’s a person, no matter how small,” is the theme that runs through the delightful production of “Seussical” now playing at the Children’s Theatre of Annapolis, directed by Brian Mellen and choreographed by Jason Kimmell, which I attended at 7 p.m. on November 12, 2016. While drawing on elements and characters from many Dr. Seuss books, the storyline primarily follows the plot of “Horton Hears a Who!”

With music by Stephen Flaherty and lyrics by Lynn Ahrens (the team that created “Ragtime!”), the songs are both tuneful and witty. The play was co-conceived by Flaherty and Ahrens along with Eric Idle of Monty Python fame, which no doubt accounts for its combination of playfulness and satire. Children will love seeing their beloved storybook characters brought to life with music and dancing while adults will appreciate – and perhaps ponder – the deeper messages of each song.

…an enchanting journey into the world of Dr. Seuss…

Horton the Elephant, played by 16-year old Dave Martinek, is a careful listener who discovers an entire world of tiny Whos existing on a speck of dust. However, Horton’s neighbors who cannot hear the Whos refuse to believe that they exist. They will not consider the fact that their ears might be less sensitive than Horton’s so they ridicule him and his devotion to protecting the Whos from harm. Martinek does a good job of capturing Horton’s sweet personality with his facial expressions, from wide-eyed incredulous awe to furrowed brows of concern.

In the world of the Whos, the Mayor and his wife, played by 17-year old Noah Meaux and 13-year old Lucy Feldmann, send their errant son JoJo, played by 12-year old Kaylee Bloom, to military school because JoJo simply has too many “thinks” and it’s disrupting their mayoral image. Meaux and Feldmann are two of the stand-out performances of the show. Their gestures and tone of voice perfectly emphasize their characters’ ever-changing states, from nervous to elated to devastated.

As the show progresses, the plainly adorned bird Gertrude McFuzz, played with distinction by 16-year old Reilly Claxton, tries to win Horton’s heart as Horton becomes entangled in caring for an unwanted egg. Claxton delivers an outstanding performance. In the song “The One Feather Tail of Miss Gertrude McFuzz,” Claxton goes in one sequence from being ditzy to angry to lovesick. Her vocal abilities match her acting talent, as do her dance skills, and she brings great creativity and range to the character of Gertrude.

Other performances of note are 14-year old Shayna Bloom as the whimsical Cat in the Hat, the stunning Aretha Franklin inspired vocals of 15-year old Claire Hatcher as Sour Kangaroo, and the scene-stealing 16-year old Felicity Davis as Judge Yertle the Turtle. I hope that we will see more soon from 16-year old Jaida Williams, who plays Young Kangaroo, as her impressive vocal talent and acting skills left me wishing that she had more scenes to shine in!

The choreography by Jason Kimmell was particularly outstanding, especially in “Horton Hears a Who!” where dancers were constantly regrouped into exciting arrangements. The homage to the Temptations was also fabulous in the song “Monkey Around.” The set was very cleverly done with several brightly painted wooden cutouts, including a giant magnifying glass to zoom in on the Whos and a helicopter (watch for how it “flies!”) The costumes were bright and evocative of the world of Seuss, and I loved the cast’s gravity-defying hairdos.

The live orchestra, directed by Trevor Greenfield, did well with sometimes difficult music. One concern I had with the sound was that it was difficult to hear some of the soloists and their lyrics narrated much of the play’s action. Perhaps the sound can be adjusted for future performances to raise the soloists’ mics and lower the orchestra. The children’s vocals were impressive, with beautiful head tone and in-tune singing on music that demanded a wide range.

Overall, the play was an enchanting journey into the world of Dr. Seuss and I recommend it to viewers. Parents may want to advise small children before the play begins that it has a happy ending as one character appears to die in Act 2 (but, spoiler alert, is not really dead).

Running Time: 2 hours and 30 minutes, with one intermission