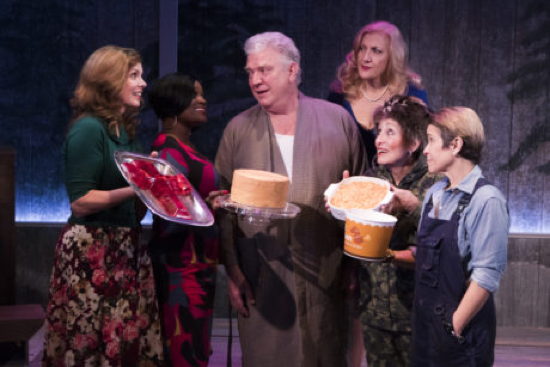 Eric Schaeffer, the Artistic Director at Signature Theatre, directs their delightful holiday musical “Silver Belles.” The book is by Allyson Currin, music by Matt Conner, and lyrics by Conner and Stephen Gregory Smith, all DC locals. The story follows the Silver Belles after the passing of their leader, Oralene, as they try to prepare for their annual Christmas pageant. These women have to learn how to work together, with a little help from Oralene’s spirit, and produce a pageant to remember.

“Silver Belles” is just the kind of lighthearted but meaningful holiday musical we could use this season.

Donna Migliaccio leads the cast as Oralene, the strong-willed Southern lady who dares God to strike her with a great idea. He strikes her with a bolt of lightning. She leads the Silver Belles and her husband to putting on the best Christmas pageant they can. Migliaccio is a powerful performer with a prevailing voice. She spoke directly to the audience and could change the mood with a single eyebrow shift.

Naomi Jacobson appears as Bo Jack, the town mechanic, radio personality, and the stage manager of the annual Christmas pageant. Bo Jack is a bright character who encourages the Silver Belles and Earl, Oralene’s husband, to keep working toward the pageant. She is the only one who believes that they can do it. Jacobson is a charming and versatile actor. She does well with Bo Jack’s quick wit and many voices. Jacobson brings so much energy to the stage that the audience can’t help but love her.

The Belles are made up of the town taxidermist Berneice (Ilona Dulaski), the sexy Gloria (Nova Y. Payton), and former Catfish Queen Ruth Ann (Peggy Yates). The chemistry between these three actors was beautiful. They each had strong scenes where they did what they could to save the pageant and each actor developed their own character well. All three had lovely voices and danced well together. Payton especially stood out vocally. She has a sweet yet sultry sound that made her distinct from the other belles. Dulaski’s facial expressions were charming and quite funny at times. Yates portrayed a mature yet somewhat naïve Ruth Ann with ease.

Earl was played by Dan Manning. We are given the opportunity to watch Earl walk through a few of the stages of grief and Manning does an excellent job of showing the contrast. Manning has a smooth voice and played the guitar with ease.

There were several clever and catchy numbers in the show including “Strike Me, Lord” and “Moonshine.” The touching duet between Earl and Oralene “I Don’t Know What to Say” pulled on some heartstrings. “While the Gettin’ is Good,” the big number in their pageant is uplifting and cheerful.

The set was clever and not overly complicated. There was a platform that would raise or lower throughout the show. The piano stayed on stage for the entire show, as did the pianist Jacob Kidder. James Kronzer did a great job of using a fairly small stage and bringing it to life.

“Silver Belles” is just the kind of lighthearted but meaningful holiday musical we could use this season. It was refreshing to see something new and sweet. The show takes a while to get going and the opening number could be tightened up a bit but I felt uplifted and joyful. It truly brought a smile to my face and got me in the holiday spirit.

Signature is continuing their work of producing more work by local playwrights. In an area where there is so much talent, it is vital that it is given the opportunity to be seen.