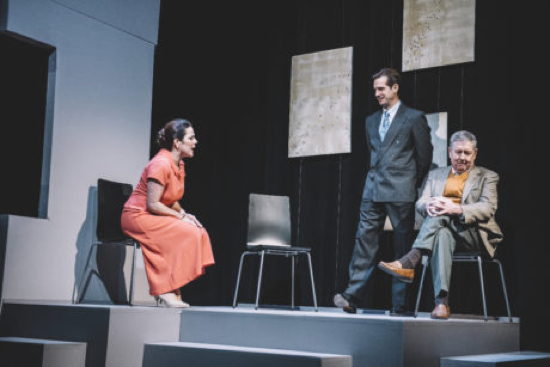 Sydney Poitier said it best when he said “So much of life, it seems to me is determined by pure randomness.” John Guare might have had this quote in mind when he was writing “Six Degrees of Separation.” The play is a love letter to the absurdities of human life. In another turn for the absurd, the play was a finalist for the Pulitzer Prize in 1991, and later when it back a movie it was nominated for an Academy Award.

If you see nothing else for the rest of the year, make sure you make it down to Keegan Theatre for “Six Degrees of Separation.”

Flan and Ouisa Kitteridge are a married couple who have invited Geoffrey (whom they explain to the audience is their “rich friend, and having a rich friend is like drowning”) in the hopes of getting his participation in a huge art deal. In stumbles Paul, a young black man who says he is a friend of their children and the son of Sydney Poitier. However, when they wake up the next morning, they discover that Paul may not be who he says he is at all.

Brandon McCoy, who directed Keegan’s “An American Daughter” earlier this year, returns with this hilarious play. Keegan legend Susan Marie Rhea, fresh from directing Keegan’s stellar production of “What We’re Up Against,” plays Ouisa, a wife and mother who develops a soft spot for confidence man Paul. She excels in the famous “Six Degrees of Separation” speech and in the distinct idiosyncrasies of this famous absurdist character.

Ryan Swain is an absolute darling as Paul, and a joy to watch.  He oscillates seamlessly between each facet of Paul’s character: the charming confidence man, the Harvard-esque intellectual, the Boston street urchin. He particularly excels with Paul’s “Catcher in the Rye” speech.

Flan Kitteridge, played by President of the National Conservatory of the Dramatic Arts, Ray Ficca is the Max Bialystock of the play. Ficca hits every comedic note with finesse!

The ensemble cast is rounded off by incredible comedic performances. Notable performances include Timothy Hayes Lynch as Dr. Fine, a bumbling gynecologist who is tricked by Paul as well, Ava Knox as Tess, Ouisa and Flan’s strained daughter, and Christian Montgomery as Doug, Dr. Fine’s expletive happy son.  The genius in the play is its ability to turn on a dime from comedy to tragedy, nowhere is this more evident than in the parts of Rick and Elizabeth, beautifully played by Matthew Sparacino and Kathleen Mason, respectively.

Keegan’s technical team manage to make every show look like a completely different venue. Matthew Keenan stuns the audience with another innovative set design utilizing flats, projections and a rotating painting. It’s almost like stumbling across an exhibit at the Hirschhorn all the way on Church Street! Colin Dieck uses light and shadows in conjunction with the set to create living pieces of art.

“Six Degrees of Separation” runs from November 5th to December 3rd at the Keegan Theatre in DC. Click here for more information or tickets.