Theatre Review: ‘Skippyjon Jones Snow What’ at The Gordon Center 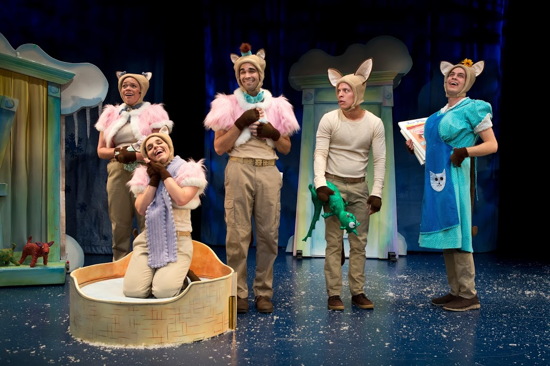 The cast of ‘Skippyjon Jones Snow What.’ Photo provided by The Gordon Center.

Skippyjon Jones is not just any cat. In “Skippyjon Jones Snow What,” presented by The Gordon Center, Skippyjon is a cat posing as a Chihuahua who craves adventure. The family musical is filled with action, fun, great music, and yes, lots of adventure (or as Skippyjon likes to say ‘aventura’). For the kids, there is sword fighting (with a nerf sword), a princess, and even a fire-breathing dragon. For the adults, there’s a ton of ‘hidden’ messages so you feel like the kids are getting more than just entertainment.

Skippyjon’s three sisters love nothing more than a good fairy tale. But Skippyjon (Joshua Wanger) thinks that those tales are for girls and that princes just wear tights and kiss (yuck!) He decides to go on a REAL adventure and ends up in a magical snowy forest where the Chimichangos (Kassandra Haddock, Jonathan Melo, and Nicole Vazquez) challenge him to his most dangerous task yet – to wake up Nieve Que (aka Snow What), the frozen princess, by kissing her. When Skippyjon frees Nieve Que, she’s ready for her prince – and for matrimony. But Skippyjon’s not a prince – and he definitely does not want to be married – so Nieve Que tries to find the bruja (Tom Meglio) and eat another poisoned apple so she can land a better prince. Will Skippyjon Jones rise to the challenge and be the prince Nieve Que has been waiting for?

The family musical is filled with action, fun, great music, and yes, lots of adventure…

Since this is a kid’s show, it’s all about fantasy and fun, and this production really delivers. There’s lots of talk about how kisses are disgusting (highlighted in the song “There is Nothing Like A Kiss”), and a whole ‘who’s on first’-type scenario given Nieve Que’s name (‘que’ means ‘what’ in Spanish). There’s also a lot of action (which keeps the kids entertained); Skippyjon Jones and Nieve Que run around the stage at the end as they’re ‘running and running out of time’ to get the princess home, and the Chimichangos race around the stage after a sneeze wakes up the sleeping dragon (although the dragon comes in useful when roasting sausages).

Unlike other family musicals I’ve seen, the songs are catchy, and I appreciate the cute lyrics. In “Some Prince,” Nieve Que talks about how Cinderella wished on an estrella (Spanish for ‘star’) and in “El Dragon,” the cast sings “here’s the part that’s really loca – get the apple in his boca.” I appreciate how the Spanish words are integrated with English – and applied throughout the show. There are also A LOT of songs – 13, not including the five reprises. Instead of weighing the show down, the songs move the show along and make the production a lot more fun.

As for the ‘hidden’ messages, there are a ton of them in the musical. Even from the beginning, Mama Junebug tells Skippyjon to ‘be considerate to others’ when playing with his sisters in the snow. When Skippyjon complains about the fairytale, Mama tells him ‘set a good example for your sisters… give Snow White a chance.’ Like a typical kid, Skippyjon says ‘no,’ but Mama replies with ‘I beg your pardon’ and demands that Skippyjon gets into his PJs and go to bed (implying that kids should always respect their parents). When Skippyjon refuses to be the prince Nieve Que has always wanted, he apologizes later and says he didn’t mean to hurt her feelings. And of course, there’s the whole ‘girl power’ notion, where Nieve Que says she can also be a great sword fighter and wins the duel against Skippyjon.

There’s also a not-so-hidden message; the musical uses a ton of Spanish words, which may inspire kids to learn another language – or at least bring Spanish words into their own vocabulary. But my favorite ‘message’ is when the story is over and Skippyjon says “I love you, mama” to which she replies “you just melted your mother’s heart.” Skippyjon’s a combination of an adventurous Chihuahua and a loving Siamese cat — a great example for kids.

The fairytale concept is so overdone, but Skippyjon Jones puts a unique spin on ‘Snow White,’ which keeps it fresh and exciting. I think I enjoyed the musical even more than the kids did given the fun, humor, music, and great characters. And those ‘hidden messages’ didn’t hurt either.