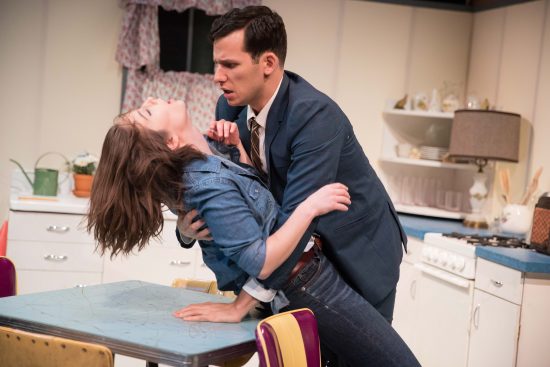 I have a feeling this sentiment might be echoed by other reviews, and possibly by theatre-goers, but it’s nevertheless true that the protagonist of “TAME.” is a nasty woman.

She chain-smokes, drinks, and plays with fire. And that’s all before the first scene. The play, written by Jonelle Walker and directed by Angela Kay Pirko for WSC Avant Bard, is a re-imagining of William Shakespeare’s “The Taming of the Shrew.” “Taming” follows a family patriarch who, desperate to control his willful daughter, Katherina, marries her to a man who promises to convert her into a proper wife. In “TAME.” Walker transforms Katherina into Cathryn (“Cat!”), and makes her the hero of her own life. The result is a fascinating, immersive, and sometimes savage look at a woman finding her voice.

The action opens on Texas, 1960. Cat, the prodigal daughter, and aspiring poet, has returned to her family home under mysterious and possibly traumatic circumstances; dialogue suggests an expulsion from school and the death of a female lover. From the very beginning Cat, as embodied by Jill Tighe, is violent and abrasive. Even her poetry-writing is violent as she slams pen to paper. She distresses her Mama, disappoints her Daddy, and pulls her sister Bea’s hair. By the time she hangs up a sheet displaying evidence of her menstrual cycle, you know there will be (more) blood. Enter Patrick, the minister and “warrior for God” who is asked by Cat’s mother to tame this wayward daughter. The adversarial relationship between Cat and “Pat” becomes the engine of the story as he proposes to “save” her through suffering.

…”‘TAME.’ is a feat of storytelling and spectacle that reminded me how invigorating and piercingly relevant theatre can be.”

Jonelle Walker’s script is a well-paced balancing act. She builds momentum in Cat and Patrick’s increasingly violent clashes, which carries over from the first Act to the second, eventually resolving into an eerie tension. The dramatic intensity of the fight scenes is counter-weighted by Cat’s cynical humor: “I’m assured that oblivion can’t be any worse than East Texas” she quips to Bea. Danny Cackley’s powerful fight choreography reflects this darkly comic spirit, as when Cat and Patrick make of show of preparing to duel, like gunslingers in a Western.

Like a gunslinging cowboy, Jill Tighe’s performance as Cat is gripping and out-size. She shouts, stomps, stands on chairs, sprawls on the floor, and generally takes up space. While the whole cast have live-in Southern accents, Tighe rollsa and lilts her lines, reversing stress (“morali-TEE”), giving all her words an ironic sharpness. Brendan Edward Kennedy makes Patrick an excellent foil; initially slick and cheerful, he reveals the layers of Patrick’s underlying sadism and insecurity. Madeline Burrows is affecting and poignant as Bea, who yearns for Patrick’s affections, while Karen Lange as Mama and John Stange as Daddy turn in solid performances.

Before falling silent at the end of “Taming,” Katherina promises that “[m]y tongue will tell the anger of my heart.” This updated version makes good on that promise by letting a flawed, angry, creative woman have her say. You don’t have to like her, but I would highly recommend giving her a listen. Ultimately, “TAME.” is a feat of storytelling and spectacle that reminded me how invigorating and piercingly relevant theatre can be.

Advisory: Recommended for ages 13 and up. Mature content, including partial nudity and simulated violence.

Running Time: 2 hrs with a 10 minute intermission, followed by a post-show Q and A session.