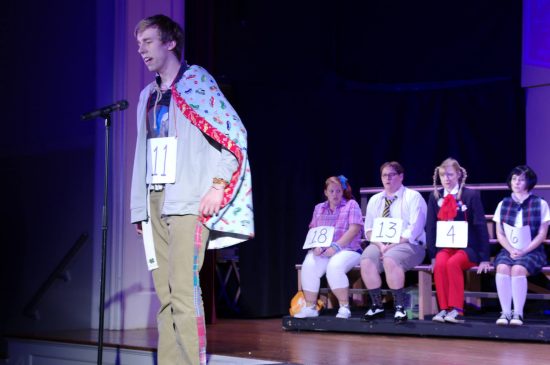 The stories that theatre often tell are grand tales of love, revenge, grief or other strong, life-shattering emotions. Without such large stakes, how are you supposed to be invested in what is happening in front of you? When life and death is on the line, it’s easy to be swept up in the emotion and conflict that unfolds on the stage. On the other hand, when the stakes are a cheap trophy and a trip to another competition or a juice box and a pat on the back are what is on the line, it would be easy to see how quickly it might be to dismiss.

Because of this, all the more credit should be given to the Heritage Players’ production of “The 25th Annual Putnam County Spelling Bee.” While the stakes are small in the scheme of things, to the ten competitors they couldn’t be larger. Six unique children and four audience members play the contestants, while the event is managed by a former winner and a local vice-principal, with an ex-con “comfort counselor” to escort the losers off the stage. As the spelling bee goes on and people are eliminated, the audience learns more and more about the children in hilarious and occasionally heartbreaking songs, leading to the climax where a winner is crowned.

… the Heritage Players have a wonderful show on their hands.

The entire cast does a fantastic job. It’s no small task to play children, but the six adult actors who play the participants of the spelling bee do so with such commitment that it’s easy to forget that they aren’t actually the ages of the characters they are portraying. Each brings something unique to the table. Zach Roth as Leaf is hyperactive and guileless, equally comfortable running while making “whooshing” noises for his blanket-cape or entertaining the audience with finger puppet shows during intermission.

In contrast, Kristi Dixon’s Marcy is all cool confidence and controlled movements, a natural prodigy in everything that she attempts. Charlie Roberts plays Chip, the previous year’s champion and literal boy scout, and manages to be both cocky from past experience but awkward as a boy going through adolescence. Libby Burgess captures Logainne, a politically minded and rehearsed girl who wants nothing more than to not disappoint her fathers and America.

The character of William is played by Stephen Foreman, a talented and self-sure kid with a special technique to spelling words out on the ground he calls his “magic foot.” Last is Olive, played by Kristen Zwobot, is a sweet, deeply awkward girl with a complicated home life that slowly comes to light as the spelling bee continues. It’s a testament to the talent of these actors that none of the actors feel lost in the shuffle and are engaging throughout the entire run of the show.

Although most of the cast are playing the child participants, Rachel Weir and Richard Greenslit are delightful as Ms. Peretti and Mr. Panch, two of the adults running the spelling bee. From Mr. Panch’s constant hilarious definitions and sentences of the words to be spelled, to Ms. Peretti’s helpful interjections of facts about the participants, they manage to somehow almost steal the show, causing near-constant laughter throughout. Special mention goes last but not least to Matt Scheer as Mitch Mahoney, the comfort counselor who is taking the opportunity to perform community service while on parole. While often in the background, he shows some serious singing chops both as Mitch, but also in short vignettes where he plays various parents of the children.

While the individual vocal performances of all of the actors were of a very high quality, there was the occasional moment where they seemed to fall out of a sync with the band. They often matched up again quickly, but it seemed to be a running difficulty. Part of this might have been due to the fact that the space isn’t a traditional theater, so the acoustics weren’t always the cleanest. Visually, however,

Visually, however, the space works to the play’s advantage, as it gives the whole proceedings the feeling of exactly what the premise of the show is: a local county spelling bee. Posters have been put up on the doors leading into and around the auditorium, which encourage proper grammar usage and listening, and there are banners the years which the school’s sports team has won (or it seems more often, came close to winning) various sporting events. They even squeeze humor out of that, with it proudly proclaiming “Let’s hear it for the pink and white!” for their mascot of the Mice. The set design by Ryan Geiger (who also directed) is simple, but provides the audience with the perfect backdrop for the proceedings, providing a familiar setting that has jokes worked in without being distracting.

The show does involve some light audience participation, as four members of the audience, picked at random, are brought up onto the stage to participate in the spelling bee. However, it appeared that before the show all of the potential people who might be pulled forward were spoken to and given a chance to have their names taken out of the running, so don’t let that stop you from attending the show if that is the kind of thing that would impact your enjoyment.

All in all, the Heritage Players have a wonderful show on their hands. While it is about a children’s spelling bee, the humor is distinctly aimed at the adults, with ribald humor keeping the audience belly laughing for the entire time. Even with that, there is an emotional undercurrent which makes you really want all of the participants to win. There was an audible murmur of disappointment at one of the early eliminations from the audience, showing a connection that can’t be faked. The Thomas-Rice Auditorium can be a bit difficult to find, but the Heritage Players helpfully have a link on their website to help find it.

As strange as it may be to say, if you get the chance this is a spelling bee which isn’t to be missed.

Running Time: 2 hours and 10 minutes, including a 15-minute intermission.