Theatre Review: ‘The Game’s Afoot (Or Holmes For The Holidays)’ at Spotlighters Theatre 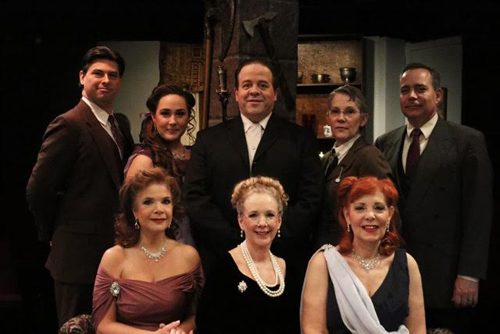 If you are looking for a break from the typical holiday fair and shopping madness and love a comical whodunit, Spotlighters has the show for you. Directed by Artistic Director Fuzz Roark with Danny Romeo, The Game’s Afoot was written by Ken Ludwig (Moon Over Buffalo, Lend Me a Tenor) and was the winner of the 2012 Mystery Writers of America Edgar Allen Poe Awards for Best Play.

This is what is true. Thespian William Gillette made a career out of playing the venerable fictional detective, Sherlock Holmes in a production he adapted from a play draft and stories written by Sir Arthur Conan Doyle. It made them both very rich and it was Gillette who established the trademark look that we associate with the character today – the deerstalker cap, the long traveling cloak, and the curved pipe. Another interesting fact is that the phrase “The game’s afoot” is actually a quote from Shakespeare’s historical drama, Henry V.

…a fun evening at the theatre.

The play itself is pure fiction, full of slapstick fun and plot twists to the very end.

The year is 1936. An unknown assailant shoots Willy (the delightful Thom Eric Sinn) during the curtain call of the last performance before the holiday break. Fortunately, his injury is not serious and he proceeds with his plans to celebrate the Christmas holidays with his fellow actors. Willy invites them to his recently constructed castle on the Connecticut River which is filled with all the latest in technological gadgets, including a hidden room, an intercom and a laboratory, much like his idol, Mr. Holmes (Mr. Gillette did, in fact build such castle and is part of a state park.)

Also in residence is his sweet but rather ditsy mother, Martha (the wonderfully wacky Penny Nichols). Willy’s intent is not only to share the holiday with his fellow actors – the newly married young lovers, Aggie Wheeler (Kellie Podsednik) and Simon Bright (Andrew Wilkin) and stage veterans, Willy’s good friend, Felix Geisel (Tom Piccin), and his wife, Madge (Ilene Chalmers) – but to see if he can discover who might have made an attempt on his life.

No one is happy when a surprise guest arrives in the form of the acid-tongued New York critic Daria Chase (Melanie Bishop, channeling Bette Davis at her most deliciously wicked) who has slammed every one of the actors at least once in her reviews. As a séance is conducted and secrets unfold, it is not too long before the inevitable occurs – the murder of one of the guests. Then the comedy (and mystery) kicks into high gear.

Despite the weather (which can’t seem to make up its mind whether it is snowing or raining), a theater-loving (and quoting) inspector arrives in the form of the very prim Harriet Gorring (Suzanne Hoxsey). Willy can no longer resist and dons his traveling coat (with a wink by costume designer Andrew Malone, the coat’s material is the same as Harriet’s skirt), grabs his pipe and steps into his Holmes persona to help solve the mystery.

The cast sports the faux British accent that many society folk and actors appropriated during that era (think Katherine Hepburn) and are solid throughout as the kind of stock mystery characters we have come to love. The acting is a bit broad but it is supposed to be.

Set designer and scenic artist Alan Zemla does a fine job bringing the castle to life in the tiny space, notably the secret room and in the details of the set dressing. A hand goes to lighting designer, Al Ramer, for adding the mood and mystery to the mayhem.

Make some time during the holiday rush for some mystery and laughs at Spotlighters’ production of The Game’s Afoot. You will surely have a fun evening at the theatre.