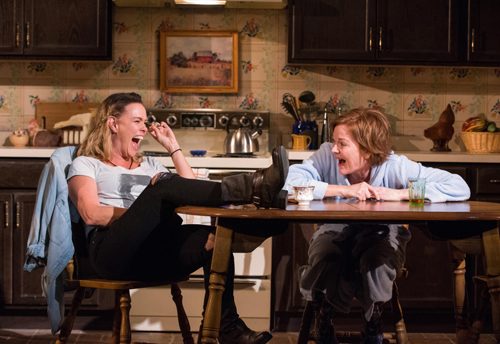 Beth Hylton and Deborah Hazlett in ‘The Roommate.’ Photo by Stan Barouh.

It is refreshing to see a new play about an oft-forgotten demographic. Whether it be in film or theater, there aren’t many great roles written for women in their 50s. Playwright Jen Silverman recognized this and wrote “The Roommate,” which made its debut at the 2015 Humana Festival of New American Plays in Louisville. It caught the eye of Everyman’s Artistic Director, Vincent M. Lancisi, and thanks to him, the play is making its Baltimore/DC premiere at The Everyman.

…’The Roommate’ is exceptional.

One of the greatest assets of Everyman is its stellar resident company. It is safe to say that I have never witnessed anything but incredible performances and these two ladies are among the best. Deborah Hazlett (in her 20th year as a member) as Sharon and Beth Hylton as Robyn, breathe life into these two very different women trying to reinvent life and find purpose after 50, divorce and children.

Under the sly direction of Everyman’s Artistic Associate, Johanna Gruenhut, “The Roommate” is both wickedly funny and heartbreaking.

Sharon’s world had been her marriage and raising her son. She is now divorced after her husband left and her son is grown and living miles away. She rattles around her “big old house in Iowa City,” going to her book club and seemingly lost. To fill the void, Sharon decides to advertise for a roommate – a 50-something like herself.

For this sweet but naïve Midwestern woman, Sharon’s new roommate, Robyn, is the polar opposite culturally and in life experience. Sharon is timid with cliché views of the big bad city. Robyn is a pot-smoking, slam-poetry-writing vegan from New York (more specifically the Bronx), who wears torn leggings and listens to contemporary music. She is fighting a losing battle with cigarettes – and also has a lot of secrets.

While Robyn’s body language is open and free, throwing her leg on the kitchen table or hopping up on the kitchen counter, Sharon is wound up very tightly, constrained and often hugging herself. As we watch these two women peel the protective layers away from their hurt and disappointment, each gives the other something they have lacked in their lives.

Hazlett has more stage time and is enthralling as she completely embodies Sharon. Watching the character come out of her shell and push past even Robyn’s boundaries is pure comic genius but also conveys moments of sadness. Sharon’s sweetness touches the tougher, more protective core of Robyn’s character. Hylton is a perfect counterpoint to Hazlett and they are a match made in theatrical heaven.

Set designer Timothy R. Mackabee, has done a magnificent job of capturing a slightly out of date, sprawling country kitchen with incredible detail. Sound designer Stowe Nelson fills the air with the sounds of the country environment and a working kitchen. Jesse Belsky’s lighting design is magical, illustrating the passing of time and days. Sarah Cubbage costumes are spot on.

Everyman’s productions always guarantee a great night of theater and “The Roommate” is exceptional.

“The Roommate” runs through November 27, 2016, at Everyman Theatre, 315 West Fayette Street, Baltimore, MD 21201. Tickets can be purchased at the box office or online.