Theatre Review: The Second City’s ‘Black Side of the Moon’ at Woolly Mammoth 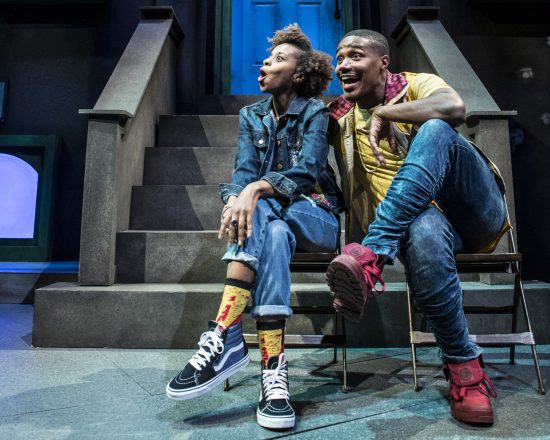 Countless political events over the last week have given many pause for thought and time taken to look on where the country is, how it got here, and where it’s going.  Partaking in this layered retrospection, The Second City has come to Woolly Mammoth to comment on the current state of black America with “Black Side of the Moon.”  Directed by Billy Bungeroth, this variety show by the renowned Chicago-based group features an all-black cast and through a series of comedic vignettes featuring sketches, singing, and stand-up, analyzes the nature of black America in the 21st century and of black identity, be it structured, lived, or the version internalized as “normative.”

Each member of the cast brings their own brand of showmanship to the production.

Bungeroth and cast member and effective emcee Felonius Munk describe the show as “afrofuturistic,” due to its forward-thinking approach by black comedians.  The nature of the show is apparent from the onset, the stage resembling a Chicago brownstone bathed in a futuristic neon light emanating from the signs and windows while a “Michelle 2020” billboard featuring the First Lady sporting an impressive afro stands prominently in the background.  These flashy indicators of the “World of Tomorrow,” however, combined with the casts’ warm, vibrant, and multi-patterned clothing, conveys a “retro-futurism” vibe.  The past, present, and the future combine to encapsulate the broad scope of the issues facing black America and the necessity of historical context in order to comprehend how the past makes the world and the individual.

Each member of the cast brings their own brand of showmanship to the production.  Of special note are the bold and candid Dave Helem, Sonia Denis, whose more improvised flare – while it made her stand-up seem more tangential –  was clearly a crowd favorite, and the previously mentioned Felonius Munk, whose incredible range of emotions, impressions, and delivery makes every scene featuring him an unpredictable delight.  The range of the scenes is incredibly diverse as well, with some being more upfront in their message, i.e. one in which Munk impersonates Obama pondering how Americans elected Donald Trump or where Denis comments on the double standard in how black men critique white and black women.

Other skits involved a hilarious odyssey in which a white volunteer from the audience was treated to life as a minority at three points, ala “A Christmas Carol.”  The best, however, are the ones which offer a range of interpretations.  The majority of these are found in the first act, but personally, the best was in Act 2 and involved Dewayne Perkins and Denis conversing with their new, stereotypically “cultured” neighbors (also played by the pair).  The two’s comedic timing as they switch personas makes it funny, but the commentary on gentrification and the various ways people are assimilated into performative identities by their environment makes it resonate.

Two skits involving a gay couple at their respective high school reunions and realize how the past shaped them attempt something similar, but it succeeds most here because it never gives a clear explanation for the scene.  Like a scene where a DJ plays Broadway hits to appeal to the students, it’s modern, it’s relevant, it speaks to everyone differently, and it’s an interesting note on how multiculturalism continues to develop in all sorts of unexpected ways in our own North American melting pot.

A lot of the show sheds light on the cast’s black experiences, especially the stand-up, but it is not about solidifying black identities or invalidating others; the group is “not a monolith,” as we are told at the show’s start.  “Black Side of the Moon” takes us everywhere it can to showcase the progression, diversity, and multi-ended evolution of black identity, and has the added boost of sharp wit, satire to keep you entertained.  It is universal enough to ensure a unity between actors, audience, and society, and as we leave the theater, we are left thinking – together this time – that same question on so many of our minds, “Where do we go from here?”

“The Second City’s Black Side of the Moon” plays through January 1, 2016 at Woolly Mammoth.  For more information, click here.