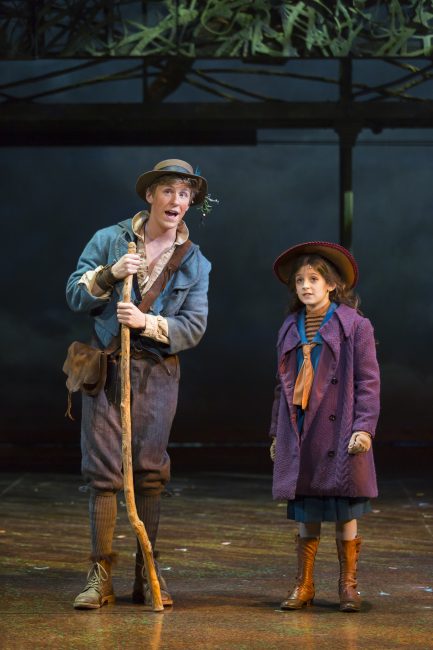 “A lot of things that look dead is just bidin’ their time.” So says Dickon in “The Secret Garden,” now playing through Dec. 31, 2016 at Shakespeare Theatre Company’s Sidney Harman Hall – and orphaned Mary Lennox, widowed Archibald Craven, and sickly Colin Craven find the gardener’s wise words to be true in this enchanting fresh production of the Tony award-winning musical created by Lucy Simon and Marsha Norman based on the classic children’s book by Frances Hodgson Burnett.

“The Secret Garden” is a must-see for adults and children alike. Exquisitely acted and sung, with captivating sets, eerie lighting, and authentic period costumes, all the components of the show work together to support the message of “The Secret Garden” that hope and renewal are possible even after shattering grief and loss.

The tenderness of the transformation process is captured by the gradual shift from darkness to light in Mary, Archie, and Colin’s attitudes as they interact and subtly influence each other. Like a growing flower seed, their changes aren’t immediate, but little by little the characters slowly open their hearts until finally, at the play’s conclusion, a full bouquet of love has bloomed for this once-despondent trio.

Theatre-goers will be swept away by this tender and charming production which promises that hope and healing are always possible.

10-year-old Anya Rothman shines as Mary Lennox, who is suddenly orphaned at the play’s beginning by an outbreak of cholera in India, where her father is stationed with the British military in the early 1900’s. Mary is sent to live with her widowed uncle Archibald Craven (played to perfection by Michael Xavier), in Yorkshire, England. Archibald is both mourning his dead wife, Lily, and his chronically ill son, Colin, played with a delightfully morbid sense of humor by Henry Baratz.

The play drew me in from the staging of the first scene, which features Lizzie Klemperer as Lily. I won’t spoil the lovely opening tableau for you with details of the set, but I will say that while the initial visuals drew me in and prepared me to love the show, Klemperer’s voice assured me that I would. From her first notes to the end of the show, Klemperer maintained the perfect amount of vibrato – not so much as to make her beautiful high notes too operatic for a Broadway musical, but just enough to balance the crystal clarity of her tone with a cozy warmth. She also brought a heart and a happiness to the role of Lily that breathed life to the allegory of her garden as the “charm” for healing.

I was delighted with Anya Rothman’s performance as Mary. She portrayed sulky spitefulness at the beginning of the show, but she did it with such sadness in her eyes that I could easily understand that Mary wasn’t an unlikeable, evil character, but a hurting child. Rothman did a wonderful job with the complexity of Mary’s role as she had to gradually take an interest in life and become more friendly as the play progressed. She made Mary believable and charming throughout the play.

I applaud Josh Young’s performance as Dr. Neville Craven because he made me feel such a wide range of strong emotions toward Neville. At first, I perceived Neville as kindly and compassionate – until Young jolted me in a subsequent scene to feel complete and utter revulsion for the character I had moments ago thought to be loving! What really impressed me, though, was that Young didn’t leave me there and make Neville into a caricature of the evil villain as he so easily could have. Instead, I was shocked by the end of the play to feel compassion for Neville because, despite his sometimes poor choices, Young maintained Neville’s humanity and portrayed a man who, while deeply flawed, also had goodness. Such a performance really takes mastery.

Michael Xavier also gave a richly nuanced performance as the grief-stricken Archibald Craven. Archie could also have become a caricature, but Xavier, like Rothman, was able to portray that all of his rude behaviors were rooted in grief. He also portrayed great love in his affect towards the children even though he frequently ignored them which kept me sympathetic towards his character. Xavier’s vocal performance and acting were a highlight of the show.

Daisy Eagan, who won a Tony as Mary Lennox in the original 1991 Broadway production, brought great cheerfulness to the role of Martha and got a nice applause at her character’s first appearance. Although her mic cut out several times in the first act, she carried on flawlessly, and fortunately the issues were resolved in Act 2.

Scenic Designer Anna Louizos perfectly captured the world of a gloomy English manor. I loved the latticed hallways and the antique furniture as well as the spooky wallpaper (projected by lights). I also enjoyed the moving garden arches that allowed for some fun choreography. Lighting Designer Mike Baldassari added to the mood with lots of dim, misty lighting. I was especially pleased with the costumes by Ann Hould-Ward, which brought to life the old Tasha Tudor pencil illustrations from early publications of the novel. The music by Lucy Simon was pretty and pleasing even though some of the songs are not your typical Broadway fare. I liked how she used tunes reminiscent of modal English folk melodies, as well as Indian music in one scene, which kept an authentic feeling to the period of the piece. Despite harmonies and scales that may be unfamiliar to some ears, the songs were thoughtfully arranged with several repeated choruses that allowed the listeners’ ears to grab onto something and enjoy the new melodies.

I highly recommend “The Secret Garden” as a not-to-be-missed show for adults and children alike. Parents should be mindful of the themes of death and loss which pervade the play when considering if it is appropriate for their very young child. Theatre-goers will be swept away by this tender and charming production which promises that hope and healing are always possible.

Running Time: 2 hours and 15 minutes, with one intermission.