Theatre Review: ‘The Wild Party’ at UMD’s Kogod Theatre at The Clarice 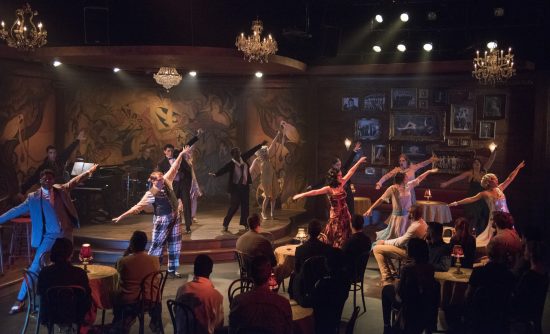 The cast of ‘The Wild Party’ Photo Credit: Stan Barouh.

The smoke that filled the shadowy speakeasy dimmed the red overhead lights and clouded the crystal chandeliers. The University of Maryland’s blackbox Kogod Theatre at The Clarice had been transformed. The brick walls were covered with framed black and white photographs, a small cabaret stage jutted out of a wall covered with an intricate mural. They say, “all the world’s a stage,” and the set of “The Wild Party” took that message to heart. The entire theatre became the stage, with actors weaving through patrons seated at small tables and guests grabbing drinks from the bar during the performance. A crackling sound announced the beginning of the show, as a voice welcomed the audience to “Queenie’s bootleg bar.”

“The Wild Party” is a show you won’t want to miss.

Based on the narrative poem by Joseph Moncure March, “The Wild Party” tells the tale of two lovers, Queenie (Monica Albizo) and Burrs (Kyle Travers). As their spark dwindles and Burrs’ penchant for violence resurfaces, Queenie decides to throw a party to make Burrs jealous and win him back. Unfortunately, Queenie doesn’t count on her friend Kate’s (Aryssa Burrs) plot to steal Burrs’ affection…or on her own attraction to Kate’s friend Mr. Black (Morgan Scott). As the lovers fight for the upper hand and the night gets rowdy, it really is a wild party.

The most striking part of “The Wild Party” by far was the set design. Scenic Designer Emily Lotz’s attention to detail was complemented by Rob Siler’s light design. Not only did Lotz design a “roof” that covered the cabaret stage, a chandelier hung from it. The speakeasy was full of props and purposeful design choices ranging from boxes of whiskey to a coat check complete with coats. Everything looked haphazard, but with just enough attention to detail to show extensive thought and planning. Siler’s lightening accentuated the set details and set the mood of a 1920’s New York speakeasy. The one drawback was that, though the audience was immersed in the performance by virture of the seating, there wasn’t quite enough room for the actors to go through the gaps between the tables. Having a few fewer tables would have made the actors’ movements less distracting.

Despite the performance’s rocky start with a few too many flat notes, the singing and acting were mostly very strong. Burns highlighted Kate’s intensity with her melismatic, larger-than-life vocals, especially in “The Life of the Party” where she belted her way around the theatre. Scott complemented her nicely with his impressively full falsettos, and Erin Valade’s harmonies were noticeably strong. Whitney Geohagan’s “An Old-Fashioned Love Story” and Travers’ “Let Me Drown” both demonstrated the actors’ tremendous stage presence, in that they were able to hit all of the notes while moving around the theatre, adding humor and levity through their physicality.