Ballet Review: ‘The Nutcracker’ by Ballet Theatre of Maryland at Maryland Hall for the Creative Arts 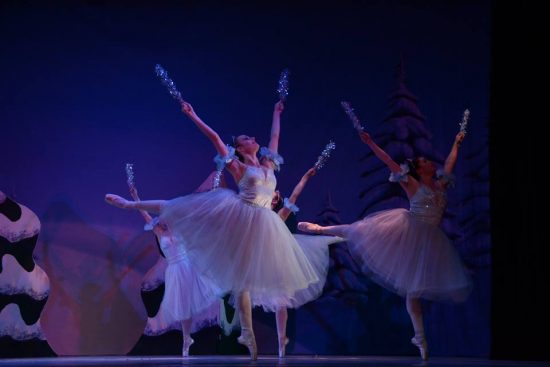 The Snowflake Corps de Ballet from “The Nutcracker” by the Ballet Theatre of Maryland at Maryland Hall for the Creative Arts. Photo by Roman Myktyta.

True to tradition, visions of toy soldiers and sugarplum fairies come to life in the most spectacular way during the recent staging of “The Nutcracker” by the Ballet Theatre of Maryland at the Maryland Hall for the Creative Arts in December.

“The Nutcracker” by the Ballet Theatre of Maryland is a beloved holiday tradition that is a must-see year after year.

In this beautiful production, the talented company, under the tutelage of acclaimed BTM Artistic Director Dianna Cuatto, creates magic with precise, dreamy dance sequences set to the timeless score of Peter Ilyich Tchaikovsky.

The opening scene captures the spirit of the holiday season as Clara (Lynne Bellinger), Fritz, Drosselmeir and his nephew Christopher (Diego Sosa) are joined by guests, young and old, as they gather by the tree to celebrate Christmas Eve and open presents, including the young heroine Clara’s beloved Nutcracker soldier.

Joy abounds with elegant line dancing, festive clapping and syncopated sword-swinging, all of which showcase the energetic ensemble’s strength, agility and exquisite ability to move as a whole.

The action continues in spirited Scene 2, only this time it’s an epic ballet battle between the evil Rat Queen, her mice minions, the Nutcracker, his fellow toy soldiers and a few cute cookies, thrown in for good measure. Eventually all is well, and the Nutcracker  transforms into a handsome Prince, who keeps Clara company on their fantastical journey.

While the entire production captivates like a colorful kaleidoscope of surprises, the contrasting stark winter wonderland scene featuring the Snow Queen and King, and darling snowflakes, stands out in particular as a fleeting gift of adagios and Arabesques that you wish would linger longer.

What unfolds in the Kingdom of Sweets is a delightful treat as members of the Ballet Theatre of Maryland shine, taking the audience through an energetic round of riveting Arabian, Chinese, Spanish and Russian numbers, before the memorable Grand Pas de Deux of the Prince and the Sugar Plum Fairy.

“The Nutcracker” by the Ballet Theatre of Maryland is a beloved holiday tradition that is a must-see year after year.

“The Nutcracker” was presented by the Ballet Theatre of Maryland at the Maryland Hall for the Creative Arts in December 2016. For tickets to future productions including “The Little Mermaid” in February, call the Box Office at 410-280-5640 or visit online.