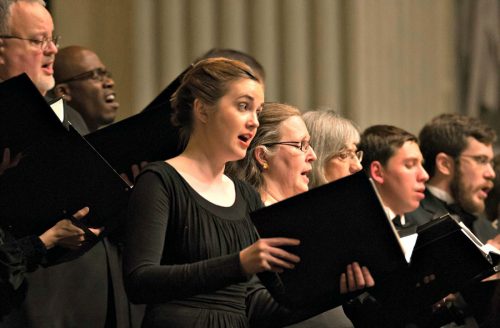 Handel Choir of Baltimore. Photo provided by the BSO.

Whether you were feeling already in the Christmas spirit or if you needed your spirits brightened, the Baltimore Symphony Orchestra’s rendition of “Movie and Music: It’s a Wonderful Life” was a perfect complement to any mood ten days before the holidays. I attended their performance on December 16, 2016, at the Joseph Meyerhoff Symphony Hall and it was a night of cinematic and musical warmth that made me cry some happy tears (more than once) before it was over.

The BSO conducts several “Movie and Music” performances throughout their season where the orchestra performs a film soundtrack live while the feature (with spoken dialogue intact) plays on a screen above the stage. Thanks to the great variety of musical styles throughout “It’s a Wonderful Life,” from lush “classic Hollywood” string sections, to festive holiday music featuring brass and woodwinds, to a lively Charleston dance, to a jazzy version of “Buffalo Gals,” with even the Wedding March and some sharp military music thrown in, this soundtrack showed off the BSO’s range and mastery.

… the BSO’s rendition of “Movie and Music: It’s a Wonderful Life” was a festive, heartwarming, and musically top-notch way to spend a December evening.

As well as the multiple musical styles, we got to hear a nice variety of bells and gongs from the percussion section, including some jingle bells on the sledding scene, as well as the piano, organ, harps, and the Handel Choir of Baltimore adding vocal effects under the direction of Arian Khaefi. I personally loved hearing the choral “ah’s” that add drama and suspense to the film score performed live and the choir got to sing a few songs with lyrics throughout the movie as well – most touchingly at the conclusion of the film when they sang “Auld Lang Syne.”

That was powerful enough but then BSO guest conductor Justin Freer really brought the waterworks when he turned around and directed the audience to join in on the singing. “It’s a Wonderful Life” had already taken us on such an emotional journey by telling the story of George Bailey who learns that the disappointments and sacrifices he had made in his life, rather than making him a failure, had actually had such a profound impact on his friends and family that they would have been barely recognizable, miserable versions of themselves if he had never been born. The entire audience was already sniffling at the sweetness of the film’s denouement, and then we were totally pushed over the edge by being invited to participate in “Auld Lang Syne.” Bravo, Conductor Freer! That was the perfect ending to the evening. I don’t think everyone in the audience was brave enough to sing, but I feel sure that everyone appreciated the moment.

From a technical standpoint, I am so pleased that the BSO had the subtitles for the movie turned on. While most of the dialogue was distinguishable without it, there were a few points where the music was a bit louder and it definitely helped to be able to read along on screen. That was a great solution to make sure that the event was enjoyable rather than a frustration. For those who might be curious as to how the orchestra stays in sync with the film, the conductor had a video monitor at his podium that blinked beats for him to keep pace with. The monitor was mostly blocked by his back and I only noticed it occasionally so it wasn’t a distraction to the audience.

The one thing that I did unfortunately find quite distracting was that the BSO seated people late for both the first and second halves of the movie, to the point that in the first half I literally had to stand up four separate times to allow people into my row and in the second half twice, and then about ten minutes late after the intermission! I found that really frustrating and I know others in the audience did as well as there were multiple late seatings throughout the concert hall.

For any kind of live performance, patrons really should not be seated late unless there is a lengthy break in the program between numbers as it distracts both the performers and the people who have paid sometimes quite a bit of money for tickets and who arrived on time. For a seamless performance such as Movie and Music where there is no gap until intermission, the BSO should have late patrons either stand in the back of the theater until then or else sit in the back rows of the uppermost balconies where they will not disrupt other patrons. I do hope that the BSO will rethink this late seating policy for the future as that is the one thing that would have made for a more enjoyable evening.

Altogether, the BSO’s rendition of “Movie and Music: It’s a Wonderful Life” was a festive, heartwarming, and musically top-notch way to spend a December evening.