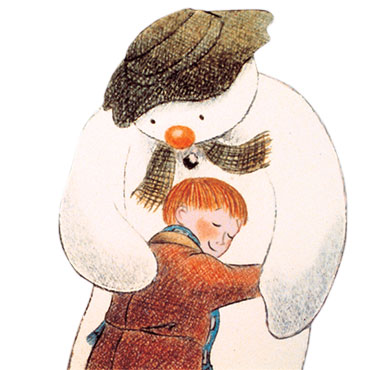 Do you want to build a snowman? You’ll be hoping for snow after seeing “The Snowman,” presented by the Baltimore Symphony Orchestra. The show follows a young boy’s adventure when a snowman he builds comes to life. It’s a magical winter wonderland that everyone can enjoy.

…a fun and entertaining show which gets everyone wishing for snow.

The show opens with the symphony playing the overture from ‘The Nutcracker.” From there, Tim Williams, a WJZ meteorologist, takes us on a journey — “playing pieces to get us in the spirit of winter.” After Williams gets the young audience involved by asking questions about the seasons, the orchestra plays a portion of Vivaldi’s “The Four Seasons.” Featured with the orchestra is a young violinist who is able to get amazing expression from her instrument. It’s fascinating how quickly her bow moves across those strings.

Following these two pieces, the animated version of “The Snowman” is shown on the screen, narrated by Tim Williams and accompanied by the BSO. Williams is able to time his narration to the action on the screen; the score mimics the action, such as the sound of giant footsteps through the snow.

In the story, a young boy builds a snowman who magically comes to life and ends up coming inside the house at midnight. We follow him from room to room – from the family room to the kitchen to the parents’ bedroom and then to the boy’s room. Of course, every room is new and different; the Snowman tries the hot and cold taps in the kitchen, tries on hats and ties in the parents’ bedroom, and tries on a skate in the boy’s room.

The Snowman also discovers the perils of his frozen state as he starts melting when he gets too close to the fire and rides around on a motorbike. Somehow, the Snowman is able to fly, and he takes the young boy with him to a Christmas party with dancing snowmen and Father Christmas. As the young boy flies hand in hand with the Snowman, the featured young soloist, Gabriel Orsini, sings “Walking in the Air.” Orsini’s voice is sweet and pure and adds a different element to the story.

The show concludes with a sing-a-long to “Frosty the Snowman,” which allows the young audience to participate in the production. All in all, this is a fun and entertaining show which gets everyone wishing for snow. It makes the season seem magical and allows young audiences to get exposure to the joys of the orchestra.

“The Snowman” plays at the Meyerhoff in Baltimore City through December 3, 2016.  For more information, visit online.