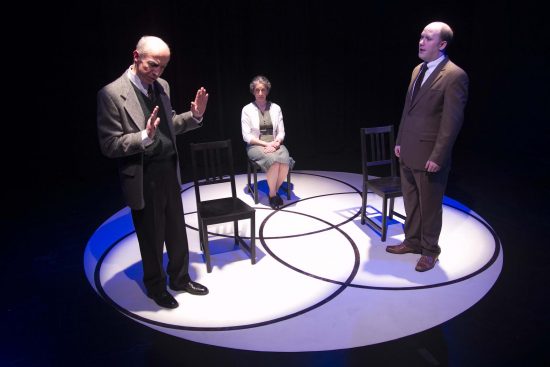 The pursuit of uncovering every mystery life presents is a universal one; one that drives our basic human curiosity, the arts, and, of course, science.  And within every answer, unravel one question, a thousand more present themselves.  For instance, one question concerns a meeting in Copenhagen, one between two of the greatest minds in nuclear science, Werner Heisenberg and Niels Bohr, in August of 1947; a meeting that shattered their friendship in the years to follow, and all that question is, is “Why?”  For the historically-focused Perisphere Theater, director Heather Benjamin explores the difficulty of answering a single question in Michel Frayn’s tragicomic “Copenhagen.”  A night of discussions, asides, and retrospects by Werner Heisenberg, Niehls Bohr, and Margrethe Bohr ensues, as they all wonder together, “Why did Heisenberg come to Copenhagen?”

The single question that drives the play is explored at length by the three characters, who are confined to a small stage of only three chairs, with no ability to leave until the question is answered.  The play does not unfold as a single conversation, but rather shifts from reenactments of the day in question, references to historical analyses of the two men’s careers, and observations recounted to the audience by the characters, forming a theoretical map encapsulating life, existence, and how the smallest moments can shape everything.  How two pioneers of quantum mechanics would have and could have, shaped not just their fields or the path of nuclear research in the years to come, but the world as we know it.

The play excels in its subtlety, evidenced by the actors’ performances alone.  John Decker’s Bohr is appropriately fatherly but tells his story entirely through the subtle nuances of his face, and Sue Struve’s Margrethe, as Bohr’s wife, creates an extra inside for the audience as well as some levity through her outsider observations.  Most outstanding of all is the brilliantly awkward and silently remorseful performance of Ben McRae as Heisenberg, a man who repeatedly questions everything he could achieve and stood for as a chief scientist in Nazi Germany.  He appears a lost soul, always standing with his jacket buttoned in hope for some illusion of composure.  Contained in this room within the already small Trinidad Theatre, we have to rely on these subtleties to drive this in-depth exploration and in terms of its material and delivery, it’s subtle and brilliant in the meaning every word comes to possess.

…subtle and brilliant in the meaning every word comes to possess.

“Copenhagen” soars as an endlessly layered analysis of the very process of analyzing and obtaining meaning and of that shared pursuit within the human condition.  It seeks to involve the audience in the unraveling of not just the meeting, but Heisenberg’s reasoning for every major professional action he took in life.  Words and life events take on new definitions in a greater context and Copenhagen becomes a nuclear reactor in itself where all sorts of bombs were created and lives, experiences, pursuits were destroyed.  Its enormous scale and ambition are hampered only by one thing that this level of analysis comes with; a lack of succinctness.

The play’s analytical value is without question realized, but its greatest weakness comes from a script that, by the point of the second act, reaches a point of pontificating ad infinitum.  As Bohr and Heisenberg reenact their meetings and look upon every approach to their lives, we reach a point where we feel we at least comprehend these men and their conflicts, but the play only wishes to expand more to make sure we can grasp them in their entirety, broadening to where I feel we losing focus of the meeting’s significance.  This one meeting which could be no different from any other, that meant so much more for their lives, relationship, everything, is felt and even given more meaning by its being performed on such a small stage, but we grasp that as early as the start of the second act.  That momentum begins to fade as we reach a point where the message has sunk in and what remains are life stories and a repetition, expanded though it may be, of the significance we came to understand.

It seems befitting that a play so about interpretation would leave me pausing for thought as much as I have in evaluating it.  On every technical level, it excels, and in intent, it is exceptional and realized.  What problems I have with the second act are not inherently wrong, but rather, as brilliantly written as they are, conflicts with the pace that separate the audience from interpreting alongside the characters.  I’m left feeling the appeal of cooperating as players and audience to discover who these established figures were devolved with time and became their discussion rather than ours.  It should be seen and it should be experienced, especially in the enclosure of the Trinidad theatre, but as a consequence of the script, I’m endlessly divided on whether I experienced “Copenhagen.”