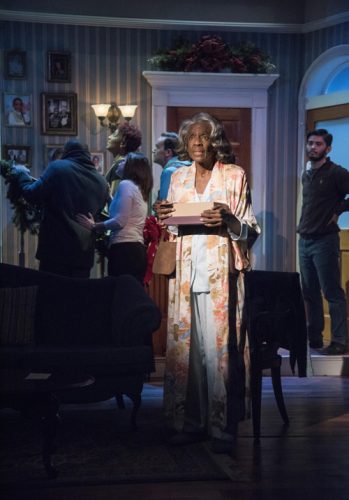 The cast of ‘DOT.’ Photo by Stan Barouh.

Everyman’s Founding Artistic Director Vincent M. Lancisi has brought (and directed) another new gem of a play from the 2015 Humana Festival of Plays. Written by actor/writer Colman Domingo (“A Boy and His Soul, Wild with Happy”), the “DOT” had a critically acclaimed premier at the Vineyard Theatre in New York and is now making its Baltimore/Washington debut. The play is both hysterically funny and heartbreaking, dealing with a sensitive issue that many of us have and will face.

With ‘Dot,’Lancisi and his fine cast present a play with humor, pathos and all the elements of what could become a new holiday classic.

The holidays are fast approaching and soon the grown Shealy siblings will gather in the West Philly home of their mother, Dotty, to celebrate. Dotty is the feisty matriarch of this boisterous, black, middle class family. Her eldest daughter, Shelly, seems on the verge of a near breakdown because of her mother, drinking watermelon vodka at 10 am in the morning. It is not too long before the reason becomes apparent. Dotty, a vibrant and elegant widow of 65, is succumbing to the cruelty of Alzheimer’s as her memory is slowly being robbed.

As in many cases, the burden falls on one child, and usually a daughter, to deal with the day-to-day responsibilities of care-taking for a parent while the siblings, living their own lives, often having little understanding of the situation or who are in denial. Though she has her own home, Shelly practically lives at her mother’s and has even resorted to taking her to work.

As Shelly, Resident Company member Dawn Ursula does a brilliant job conveying the range of emotions of a family caretaker. Overwhelmed, the mix of frustration, fear, bossiness, anger and love is very much on the mark. Not only a lawyer, she is a single mother with a nine-year-old son (who we never see). The baby of the family is Shelly’s diva sister, Averie (the marvelous Paige Hernandez). Once a successful YouTube sensation with her 15 minutes of fame, she is now living in Shelly’s basement and working as a cashier at a local store. Full of sass and optimism that take over the room, Averie is always plotting her comeback.

An old childhood friend, Jackie (the wonderful Resident Company member Megan Anderson), has stopped by for a visit. Hers was the only white family (of hippy, liberal Jews) who did not move out of the neighborhood when it became integrated. Shelly’s brother, the “golden boy” was also her high school sweetheart who spoiled her for any other man. Jackie has run away from her job in New York City. She has come home to sort out her life after discovering that, at 40 years old, she is pregnant by a married man.

Shelly is desperate for her siblings to arrive for the holidays to discuss how they can help with their mother, though it is doubtful they can assist financially. Donnie (Yaegel T. Welch), a freelance music critic, arrives with his white husband, Adam (Rob Jansen). In the middle of a juice cleanse, it is clear that they are dealing with their own issues – a mid-life crisis and crossroads in their relationship. Donnie is more conservative and wants to start a family while Adam is obsessed with health and staying fit.

Shelly does have some relief several days a week in the form of Fidel (Ryan Carlos Dalusung), an undocumented political refugee from Kazakhstan whose gentleness works wonders with Dotty. Adam and Fidel also illustrate another truth – people outside a family are able to show more patience because they are not burdened with the emotions and history. Both of the actors exhibit such amazing grace and tenderness in two important scenes with Dotty. The first is when she is going through her old photos, recalling and often forgetting in an instant, memories of her past. Fidel simply guides her back with cues. In a clear moment, she states her fears simply to Fidel and knows that her disease is getting worse.

When Dotty hears an old Judy Garland song on the record player, she thinks that Adam is her late husband and wants to dance with him. He runs with it, to the objections of everyone, and gently takes her in his arms, dancing around the room as the family looks on. For Dotty’s children, it is the moment they all finally come to grips with the harrowing truth of their mother’s condition.

The heart and soul of this production is Sharon Hope as Dotty. She carries around a tape recorder for her grandson to save her memories for him when she is clear-headed. Hope conveys the complexities of Alzheimer’s and its effects as she struggles with holding onto her identity and sense of self. Though often struck with a look of a lost and bewildered child, when she is firing on all thrusters, Dotty possess a wicked sense of humor and never asks for pity.

There are some too neat fairytale-like resolutions to some of the conflicts but we are starkly reminded that there will be no happy ending for Dotty.

As is the trademark of an Everyman production, the entire creative team has done a beautiful job led by set designer James Fouchard. The set is intricately detailed – first a sunny kitchen (with a working stove!) with a doorway leading to the dining room. The crew was applauded for an amazing set change for the second act that revealed the full dining room and living room of this elegant home. The lighting design by Harold F. Burgess II compliments the set while costume designer David Burdick does a great job reflecting the sensibility of each character in this contemporary setting.

It doesn’t matter if you are black or white, gay or straight, Domingo presents simple, universal truths of being human. With “Dot,” Lancisi and his fine cast present a play with humor, pathos and all the elements of what could become a new holiday classic.

Running Time: Two hours and 20 minutes with a 15-minute intermission.