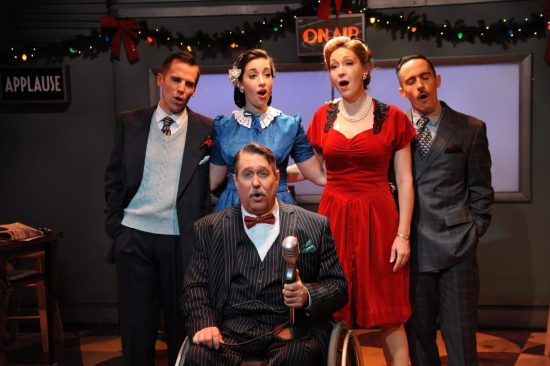 The Cast of “It’s a Wonderful Life: A Live Radio Play” by the Annapolis Shakespeare Company at their Studio 111. Photo by Joshua McKerrow.

Everything is swell in the Annapolis Shakespeare Company’s heartwarming production of Joe Landry’s “It’s a Wonderful Life: A Live Radio Play” directed by Donald Hicken. This energetic take on the holiday film classic features a charismatic ensemble of five actors effortlessly moving back and forth between more than 30 characters including George Bailey and the rest of the gang from small town Bedford Falls, New York.

…heartwarming…Anybody who loves the original movie will walk away from this show with a smile on their face and a renewed sense of holiday cheer.

Fans of the original Frank Capra movie will be pleased to experience the same range of emotions as if they were watching the film from the comfort of their living room. The story predominately sticks to the movie script, with a few scene omissions for time’s sake.

The audience walks into a 1940s New York radio station complete with Art Deco floors and ‘Applause’ and ‘On Air’ signs, and a “countdown” to the regularly scheduled program begins. Lana Sherwood (played by Sally Boyett, ASC’s Artistic Director) graciously welcomes everyone to the show with witty banter, and encourages audience participation and clapping on cue. Meanwhile, Freddie Filmore, the spirited announcer (portrayed by ASC Managing Director Rob McQuay) commands the mic, and the action of ‘WBFR–the Playhouse of the Air’ gets under way.

Throughout the production, the actors attempt to mimic the vocal inflections of the characters in the movie, and did a very good job. Rob McQuay’s authoritative baritone as miserable miser Henry F. Potter, his high-pitched, nervous portrayal of Uncle Billy and the narration as the angel Joseph, stand out in particular. Sally Boyett is equally impressive with her flirty and sweet depiction of Violet Bick, and as the doting and loving Rose (Ma) Bailey.

At the center of it all is George Bailey, portrayed by the convincing and determined Evan Casey, who performs the role as radio personality Jake Laurents. Specifically, he captures the brooding and volatile side of Jimmy Stewart’s George Bailey well, particularly when he argues for the survival of the Bailey Building and Loan with its Board of Directors and Potter. He shines again when expressing frustration with Uncle Billy for losing $8,000, and, shortly thereafter, when he came to his wit’s end after incessant questions and piano practice by his children. Following his wife Mary’s pointed question, “George, why must you torture the children? Why don’t you…,” the several seconds of silence in the theater was riveting.

In between those heavy scenes, there were entertaining moments. It’s important to note, that despite, being a ‘radio broadcast,’ there’s a lot of movement from the actors throughout the play including cute, choreographed parody commercial numbers for Bremel Hair Tonic and Dux’s Toilet Cake Soap, which put the crowd in good spirits. Sound effects from a handful of items such as shoes, a tin can and horn, added  to the sensory experience.

Anybody who loves the original movie will walk away from this show with a smile on their face and a renewed sense of holiday cheer.