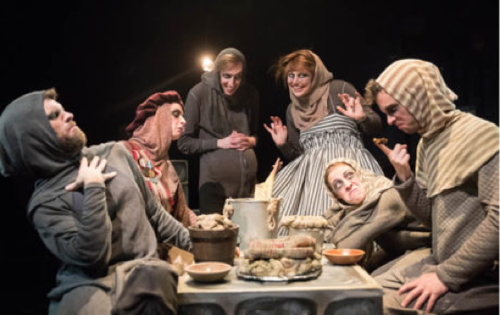 When “Ubu Roi” premiered in Paris in 1896 a riot broke out and the door to theatre modernism was kicked open. Alfred Jarry’s play, performed originally in French, satirically deals with greed and power pulling themes from Shakespeare. Pointless Theatre took the original script and translated it with the precarious Google Translate. The result was an even more absurd performance of an already bizarre play.

It is an incredibly fun night of theatre and could offer a great escape from some of the holiday madness in the coming weeks.

“King Ubu” follows the tale of Pa Ubu’s rise to power in Poland after killing King Wenceslas and his family. His reign is an absurd bloodbath of ever rising taxes. The youngest son of Wenceslas, Bourgelas, survived and is fighting to restore his family to the throne. In all the play is about two of the most consisted thing in life: going to the bathroom and taxes.

The power hungry and bloodthirsty Pa Ubu was played by DC newcomer Colin Connor. Connor is a visceral energetic actor with a large physical vocabulary. His movement work in this piece was intense and consistent. He has a strong and powerful voice that carries and demands attention.

His partner, Ma Ubu, was played by former Miss DC, Haely Jardas. Jardas is a perfectly conniving Ma Ubu with a healthy splash of Lady Macbeth. She also gives a powerfully physical performance and her micro-movements were stirring.

The ensemble was made up of Madeline Key, Lee Gerstenhaber, Sarah Wilby, Nick Martin, Scott Whalen, and Mary Myers. Each of them played several characters and operated various puppets. Each of their characters had a distinct movement pattern and clear intentions. It was a remarkably strong ensemble performance. Each member carried a lot of weight on their shoulders and truly made the show.

The puppets themselves, designed by Patti Kalil and Rachel Menyyuk, were small and clever. They added great color and whimsy to the play. It was refreshing to see puppets used in a clear way rather than just thrown in for spectacle sake. They definitely created an element of shock but in a way that helped the absurdism.

Frank Labovitz directed and designed the set for ‘King Ubu.’ His direction was very quick paced and smart. The whole performance was surprisingly intellectual. The quick pace could be daunting to off-putting to those unfamiliar with what they are getting into. Fans of absurd theatre, however, will find the performance hilarious and endearing. It is an incredibly fun night of theatre and could offer a great escape from some of the holiday madness in the coming weeks.