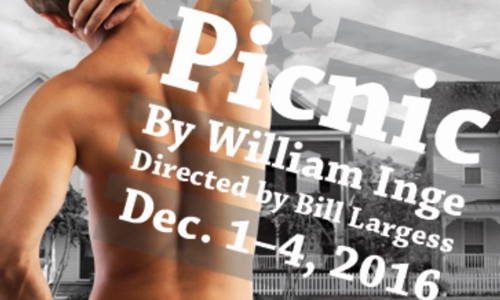 Keep yourself warm in these chilly December evenings by seeing “Picnic” at Catholic University. This steamy American classic by William Inge is set one Labor Day weekend in a small town preparing for the annual picnic. A newcomer arrives and everything that seemed certain that summer is flipped upside down.

The story follows Hal Carter (John Paul Jones) who has just come into town to see his old college buddy Alan Seymour (Danny Beason) about finding himself a good job. Hal meets the girl that Alan has been going steady with, Madge, and her little sister, Millie. Madge is the town beauty that all of the boys want to be with and Hal is no exception. What comes next is a story of prejudice and love.

Keep yourself warm in these chilly December evenings by seeing “Picnic” at Catholic University.

The entire cast was made up of CUA students while the productions staff consisted of local professionals, including director Bill Largess, CUA alumnus and artistic director of Washington Stage Guild. Largess made a great use of the space and varied the planes on which the actors stood. He made some powerful stage pictures with his actors.

The set, designed by Luciana Stecconi was truly beautiful. It consisted of two large houses, reminding us where and when the story takes place. It was easy to identify that we were in a small town with some humble citizens. The porches were lovely and the use of levels and windows made for some powerful moments. It also provided many places for actors to enter and exit and that was a nice touch.

Costume designer Danielle Preston designed gorgeous dresses for the young women. They were everything one would dream for a picnic in the 1950s: colorful, frilly, full skirts, ribbons. All of the characters except for Madge appeared in more earthy or muted tones. The adults all wore a lot of black, gray, and brown. Madge started in a black and white dress but gradually ended in a floral pastel. This was an excellent choice to really show how Madge stood out from the rest of the characters.

Millie Owens, the younger sister who is smarter than but not as pretty as her elder sister Madge, was played by the delightfully energetic Maddy Belknap. Belknap’s portrayal of this role was high stakes at all times and she carried the show on her petite shoulders. She played the part with plenty of sass and charm.  She is a smart actress who willingly gave stage to her fellow ensemble members but demanded attention. She played the younger sister with youth in a kind way rather than a mockingly babyish air. She was easily able to portray youth yet with wisdom beyond her years. Belknap is in her senior year at CUA and certainly has a very bright career ahead of her.