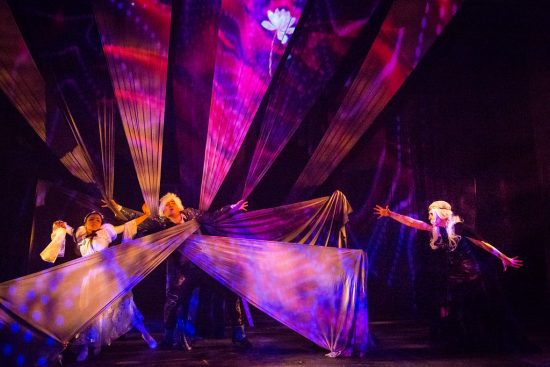 Eliza Smith as Sleeping Beauty, Zana Gankhuyag, the Prince and Irina Tsikurishvili as the Witch. Photo by Johnny Shryock.

Fairy tales naturally call out to our imaginative earlier days of youth. Larger than life heroines are put in sketchy circumstances set in woodlands, usually with ghastly creatures or nasty uber females to contend with. From Snow White to Goldilocks to Cinderella to our own Sleeping Beauty, the archetypal theme has gripped medieval storytellers and may want to make us question the brothers Grimm’s relationship with their dear mum.

Synetic Theatre’s wordless reimagining of the classic tale of a girl awakened by a kiss is a quite astonishing piece of art that provides, pardon the circus phrase, something for everyone. In this version, the elements of sight, sound, movement and multiple lighting special effects provide a deeper emotional experience than would ever be thought. And it works for both adults and children. During the matinee there were ample youngsters present, yet except for the nicely timed comic exploits of one of the Faeries (Kathy Gordon) there were few guffaws, only rapt attention.

… paints an indelible picture of love conquering all that stands in its way.

Director Paata Tsikurishvili and choreographer Irina Tsikurshvili head the production team again for this production, which features as the 2 key characters–the beauty and the prince–alumni of the theater’s Teen Company. The radiant Eliza Smith plays the princess, known in the story as Briar Rose, with a bright innocence and athletic and expressive Zana Gankhuyag is the determined Prince who rescues her from a cursed eternal sleep.

The plot, slightly updated, adds a nice backstory that humanizes the Witch. Usually characterized simply as wicked, (name calling was rampant once upon a time…) here, she is a woman defending her forest, which she believes is being attacked by a hunting party. She turns to the King and Queen and curses their offspring, young Briar Rose. For protection, the young child is taken by the Faeries and grows up in the woods as an innocent maiden. The fun twist is that the Prince is the Witch’s son, who she is grooming to take over the neighborhood. The ensuing battles over love and life hence have much deeper meaning and gravitas.

Irina Tsikurshvili is mesmerizing, putting the show on her back with burning eyes that hint at the fierceness of her fury as well as her love of her son. As if actual unseen power flowing through her, she commands the stage with every purposeful step. Don’t cross this witch. Her tender moments making magic in the woods with her son, coupled with their battle later, are the highlights of the show.

Gaily festooned in classic children’s theater apparel are the Fairies, Francesca Blume, Kathy Gordon and Emily Whitworth) a bumbling trio that Guide our princess to adulthood. Smith and Gankhuyag as the young lovers play their roles beyond their years.

Costume design by Kendra Rai for the witch in drastic white, black and magenta are functional as well and sensuous and are contrasted with the silly-fun pastels of the Faeries. A visual delight.

And by use of a series of gossamer linens that flow vertically from the top of the stage, we are treated to a simple tool that gives depth to our fanciful forest and is used craftily to signify magical unrest. It also is a backdrop to the light accessories of the show—a fireball here, electric bands firing upward over there, choreographed in sync with the movements of the Witch and Prince. Scenic design (Phil Charlwood) does superb work with these light projections. Fine scrim work presents the backstory for the characters, adding to the mysterious events.

The surprise of “Sleeping Beauty” is that it is such a rich show that works on several levels, firing signals thru music, light and movement that paints an indelible picture of love conquering all that stands in its way.