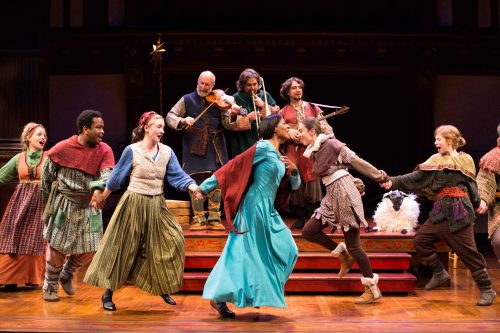 The company of the holiday production of The Second Shepherds’ Play dances in merry celebration. Photo by Brittany Diliberto.

These days, people’s thoughts turn to Christmas before we even hang up our Halloween costumes. Carols fill the air, TV starts airing Charlie Brown and “Rudolph the Red-Nosed Reindeer,” and the world seems to explode in a flurry of red and white and evergreen. In the Middle Ages, the festivities surrounding the celebration of Jesus Christ’s birth were a little different.

“The Second Shepherd’s Play,” now playing at the Folger Theatre, would likely have been originally performed out in the open, freezing air of English winter. The Folger’s traditional Elizabethan interior, while indisputably indoors, lends something of this feeling due to the marked absence of curtains and the curious intimacy of the performance space. Seated in the balconies (which are trimmed with holiday decorations) or in the chairs beneath the three-story ceiling, one can easily imagine “The Second Shepherd’s Play” merry group of performers and live musicians telling their pastoral farce in the streets of a medieval village.

Right from the beginning, the fantastic musicians and singing make it feel like the theatre has suddenly been plunged into a medieval country fair.

The play tells the tale of three shepherds — Coll (Louis E. Davis), Gib (Matthew R. Wilson), and Daw (Megan Graves) — who wake one morning to find that one of their sheep has been stolen. The likely culprit, a nefarious thief named Mak (Ryan Sellers), insists that he is not to blame — but has in fact spirited the creature away while the shepherds were sleeping, and has disguised it as his newborn son, watched over in a cradle by his wife Gill (Tonya Beckman). Due to the nature of the farce, hilarity of course ensues, and it isn’t until the shepherds regain their sheep and emerge outside that the actual biblical story begins — when they are visited by an angel (Emily Noël), and follow a star to a manger in Bethlehem.

While the story itself is entertaining and easy to follow due to a consistent rhyming scheme and excellent acting, the thing that really brings this show together is the music. Right from the beginning, the fantastic musicians and singing make it feel like the theatre has suddenly been plunged into a medieval country fair. Music director Robert Eisenstein played violin, Brian Kay played a lute, a lyre, and other stringed instruments, while Daniel Meyers played pipes and even a bagpipe.

The show features nearly two dozen songs, all English and all several hundred years old. “There simply is so much good music from the Middle Ages,” Eisenstein notes in the program. “Old does not mean inferior or less sophisticated. There is a strength and power in these tunes, words, and forms that still speaks directly to us.”

Virtually everyone in the show sings, and occasionally breaks into dance. Eisenstein points out in the program that “carole” originally referred to a dancing song, and what emerges from this series of “caroles” in The Second Shepherd’s Play is a joyful, somewhat reverent, and utterly gorgeous celebration of Christmas.

Music is notably ephemeral in terms of the passage of time — so the difficulties of accurately performing or even finding medieval music make this performance all the more notable. Add in puppetry, an extremely funny play, and excellent actors, and you have a truly enjoyable experience.

“The Second Shepherd’s Play” is performing at the Folger Shakespeare Library through December 21. For more information, please click here.