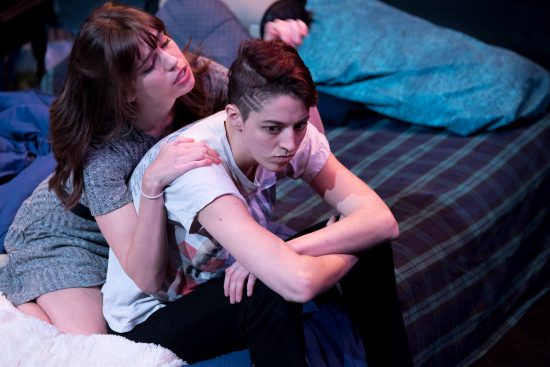 “Imagine having to take the 7 train to the ballpark, looking like you’re riding through Beirut next to some kid with purple hair next to some queer with AIDS right next to some dude who just got out of jail for the fourth time right next to some 20-year-old mom with four kids. It’s depressing.” These stereotypical, hateful comments were made by ex-Major League Baseball pitcher John Rocker in 1999, which undermined his career following his suspension.

Yes, the infamous 7 train a.k.a. the Flushing Line in NYC that extends from Flushing, Queens to western Manhattan. (A personal note: I used to ride that line daily for years and found the passengers to be as normal as any New Yorkers.)

What Rocker didn’t imagine encountering on this subway train were World War II-era Nazis, and neither did I, or at least I didn’t think so. In “The Zero Hour,” a compelling 2010 work by Madeleine George, which debuts in Iron Crow Theatre’s first ever SecondStage season, Nazis, including those on the train, play a significant role in the play’s subplot.

In keeping with Iron Crow’s tradition of presenting offbeat plays with a darker hue tinged with sexuality that extend beyond the norms, “The Zero Hour” under the meticulous direction of Ann Turiano, is a provocative examination of relationships that is carried out by brilliant actors.  George manages to blur reality with mind games (and I do mean blur) and how these concepts intersect using emotionally charged drama with the appropriate amount of humor throughout.

The story centers on two women in a relationship living in a rundown walkup in Queens just near the elevated section of the 7 train. Rebecca, played exceptionally by Rebecca Tucker, a late-twenties Jewish femme, is writing a textbook on the Holocaust for seventh graders—an effort that spills into her personal life and psyche.

Her lover O, superbly portrayed by Rena Marie, is a slightly younger butch woman who is unemployed and is destined to remain so if she has anything to do with it. They seem to have little in common except for having mother issues.

Rebecca carps on O’s lack of a job; O rails against Rebecca’s insistence on remaining in the closet particularly when it comes to her mother who supposedly is unaware of the relationship. Rebecca doesn’t quite accept the fact she is actually a lesbian despite the torrid sex between the two.

O’s mother recently died but never approved of her O’s choices. The strains in their fragile relationship begin to take its toll as the play progresses and ends with an unusual twist that leaves more questions than answers.

Both actors play multiple characters: Ms. Marie, in addition to her role of O, effectively plays a therapist and three different Nazis on the train employing different outfits and accents; Ms. Tucker plays both mothers (one appearing as a figment of the imagination).

As intended by the playwright, the actors change into the other characters in full visibility to the audience by removing then replacing articles of clothing, hats, footwear and adjustments made to hair-dos. They perform these tasks frenetically and with precision but would do well to eliminate the exchanges in shoes, for example, to shorten the delays between scenes.

This process causes the play to be choppy at times as the audience anxiously anticipates the next scene to begin while leaving the actors occasionally out of breath as they initiate the subsequent dialogue. One cannot fault the actors involved, however; that’s how “The Zero Hour” was written.

Aside from that quibble, the performances under Ms. Turiano’s direction by the two principal actors make this a top-notch theatrical experience. Ms. Tucker is spot-on as the neurotic and conflicted Rebecca. Where there is temptation to overact, Ms. Tucker refrains from doing so but exudes sufficient exasperation to be believable. In addition to the interactions with O and the Nazis on the train, she does very well delivering several monologues that recite the lessons of the Holocaust in her textbook.

For her part, Ms. Marie realistically carries out her role of the unemployed, rather irresponsible butch lesbian trying desperately to make things work in the relationship. The chemistry between the two is dynamic evolving into genuinely portrayed confrontations. Her other side roles are also performed well demonstrating her acting versatility.

A third actor, Nick Fruit, joins the performance near the end. He plays Doug, a guy on the prowl at a local bar whose prey happens to be Rebecca who is there following a difficult day. Could Doug be yet another Nazi?

Mr. Fruit is wonderful in conveying this charming guy who, unfortunately for him, barked up the wrong tree. Yet, one cannot help but root for him. It is here whereby Rebecca finally acknowledged she was a lesbian—an identity she has struggled to admit heretofore.

This turned out to be among my favorite scenes with the witty repartee exchanged between the two as totally enjoyable. The encounters with the Nazi train passengers rank high as well.

Director Turiano, who is assisted by Panna Adorjáni, brings all the elements together in this thought-provoking work.  Excellent lighting design by Chris Flint who doubled as the set designer enhances the mood and scene changes effectively.

The sound design team consisting of Alex Duncker, Philip Rodgers and Iron Crow Artistic Director Sean Elias does well in providing sound effects, such as a dripping leak from the ceiling of the apartment into a bucket to the sounds of that 7 train nearby.

Unfortunately, “The Zero Hour” has a short run at Iron Crow so you must hurry if you wish to see an interesting play performed by an extraordinary cast.

Running Time. One hour and 45 minutes with no intermission.

Advisory: Contains sexual situations and profanity and is not recommended for children under age 18.