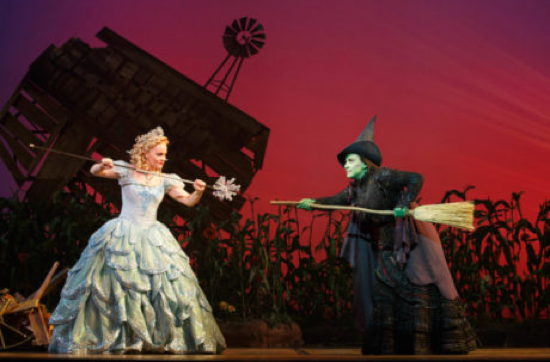 It’s the perfect time for the acclaimed musical “Wicked” to come to Washington. Since the election, Washingtonians have talked about nothing but the fact that we’re not in Kansas anymore. In fact, the production running through January 8 at The Kennedy Center Opera House is timely in ways the musical’s creators never anticipated at its Broadway opening in 2003.

Based on Gregory Maguire’s novel of the same name, “Wicked” gives “The Wizard of Oz” the “Rosencrantz & Guildenstern“ treatment. Glinda (Amanda Jane Cooper), later The Good Witch, and Elphaba (Jessica Vosk), the future Wicked Witch of the West, are given back stories involving a stint as roommates at a Hogwarts-like prep school, initial mutual hatred-turned-friendship, and a fight over a price charming named Fiyero (Jeremy Woodard) that tests their BFF status. The musical’s world is populated by other citizens of Oz including flying monkeys, palace guards, and the Wonderful Wizard himself.

The shrieking at the curtain call showed a hit show as popular as ever.

For a production built on spectacle, however, the show’s quieter moments are it’s most affecting. Elphaba, the ugly unmentionable of the crowd, is mocked by Glinda and her countless followers; so when Glinda finally reaches out, joining her in awkward dance at a party, their quiet exchange communicates silently the theme of inclusion to which the musical repeatedly returns.

Spectacle greets the viewer even before the curtain goes up. An animatronic dragon hovers over the proceedings, it’s fire-red eyes a repeated part of Kenneth Posner’s otherwise dynamic lighting design when the story turns toward Elphaba’s darker magical talents. Over time the dragon becomes a drag on the show itself – a reminder that it dates from the pre-Hamilton days when musicals needed a crashing chandelier or a helicopter on stage to make it big. The effect looks dated and awkward, belonging more to a theme park than Broadway.

The show’s human element, however, rises to the occasion. Strong ensemble movement is front-and-center throughout (dance arrangements by James Lynn Abbott) starting with the monkeys that raise the opening curtain and later fly about the stage. Director Joe Mantello takes consistent advantage of stage depth as moves us seamlessly from scene to scene. Susan Hilferty’s costumes shine brightest when the players and stage are washed in Emerald City green. While the voices are likewise strong without, individual mic coverage dropped occasionally throughout, making any group-sung lyrics sound – to borrow a word from the show – “confusifying.”

The show’s beating heart is the Glinda-Elphaba relationship, and neither Cooper nor Vosk disappoints. Each is strong vocally, though Vosk has the show-stopping role, and feels more comfortable in her character’s journey from underdog to force of nature. Cooper is asked to giggle and flip her hair a few times too many, and the relationship at the show’s center would benefit from both parties traveling more of a dramatic distance over the course of the story.

Premiering in 2003, “Wicked” predates the Harry Potter films partially and the Hunger Games franchise entirely, and yet it now plays like its cribbing visual ideas from the franchises it helped to inspire. Broadway veteran Isabel Keating impresses throughout as schoolmaster Madame Morrible (and later the Wizard’s ‘press secretary’) but she is dressed throughout to mimic Elizabeth Banks’ Effie Trinket in The Hunger Games.

“Wicked’s” debut year of 2003 was also the year America launched the Iraq War, and references to ‘regime change’ and lying leaders are not coincidental. Still, it is eerie how well the show fits in our post-Trump world. “So you lied,” Elphaba asks The Wonderful Wizard of Oz (Fred Applegate – another Broadway vet who, like Keating, makes it all look easy). “Only verbally,” Oz responds, to a noticeable audience reaction that was more shudder than laugh. More regrettably topical is a teacher and talking goat Doctor Dillamond (Chad Jennings) being dragged off of his job by fascist foot soldiers for being “outspoken.” I felt the theatre’s temperature rise at that moment. It is not as distant a fantasy as it should be.

All does, however, proceed to a happy ending with a twist, and with several winks to the original film along the way that will have Oz fans giggling. The shrieking at the curtain call showed a hit show as popular as ever. How did the Beatles deal with that decibel level every night?

Running Time: Approximately 2 hours and 45 minutes, with one 15-minute intermission.