“‘Silver Belles’ is just the kind of lighthearted but meaningful holiday musical we could use this season. – Elle Marie Sullivan.

Synopsis: When Oralene, the longtime director of small town Sylva Ridge’s Christmas Pageant, suddenly passes away, the Silver Belles must come to the rescue! With the spirit of Oralene looking on, the sterling-hued vixens band together, discover their talents and pull out all the stops to keep the beloved pageant alive. It’s Golden Girls meets Designing Women with a heaping helping of well-known Christmas tunes and clever new ditties. Christmas without the Silver Belles… just wouldn’t be Christmas! 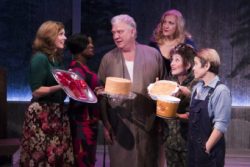 2. The Game’s Afoot (Or Holmes For The Holidays) at Spotlighters Theatre.

“…a fun evening at the theatre.” – Lynne Menefee.

Synopsis: It is December 1936 and Broadway star William Gillette, admired the world over for his leading role in the play Sherlock Holmes, has invited his fellow cast-members to his Connecticut castle for a weekend of revelry. But when one of the guests is stabbed to death, the festivities in this isolated house of tricks and mirrors quickly turn dangerous. Then it’s up to Gillette himself, as he assumes the persona of his beloved Holmes, to track down the killer before the next victim appears. The danger and hilarity are non-stop in this glittering whodunit set during the Christmas holidays. 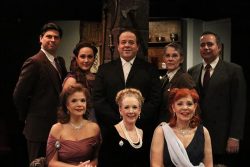 3. The Lion, the Witch, and the Wardrobe at Adventure Theatre MTC.

“If you’ve read the book, you’ll love this retelling and if you haven’t read it, this performance will give you the best introduction to the world of Narnia that you could hope to receive.” – Liz Ruth-Brinegar.

Synopsis: Join us for this snowy, holiday classic featuring just a two-person cast! Peter, Susan, Edmund, and Lucy are sent to live in the countryside home of professor Digory Kirke. As Lucy explores the house, she discovers a secret portal to a magical world called Narnia. With an evil White Witch ruling the kingdom, can Lucy, her new friend Mr. Tumnus, and her family band together to save Narnia? 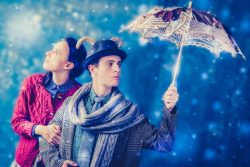 4. Merlin by The British Players at Kensington Town Hall.

“It’s a real humdinger of a show a comedic riot….” -Raychel Harvey-Jones.

Synopsis: Madcap wizard Merlin and his apprentice Harry are the magicians in this magical Arthurian-style romp. Can Merlin and Harry thwart evil Ravenclaw’s plans to kidnap King Arthur’s daughter, Princess Avaline? Will Dame Henrietta Cupcake get a knight to remember? There’s plenty of fun and comedy in this new traditional family pantomime. 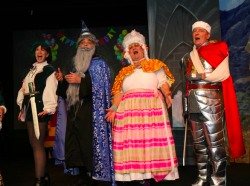 Cast of Merlin. Photo courtesy of The British Players.

5. A Christmas Carol at Ford’s Theatre.

“…a beautiful production of a timeless story…” – Elle Marie Sullivan.

Synopsis: Join the ghosts of Christmas Past, Present and Future as they lead the miserly Ebenezer Scrooge on a journey of transformation and redemption. Originally conceived by Michael Baron, this music-infused production captures the magic and joy of Dickens’s Yuletide classic. Acclaimed actor Craig Wallace plays Ebenezer Scrooge. This annual production has been a Washington tradition for 35 years. 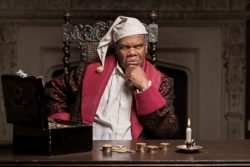