Cabaret Review: ‘Irving Berlin: A Simple Melody’ at the In Series 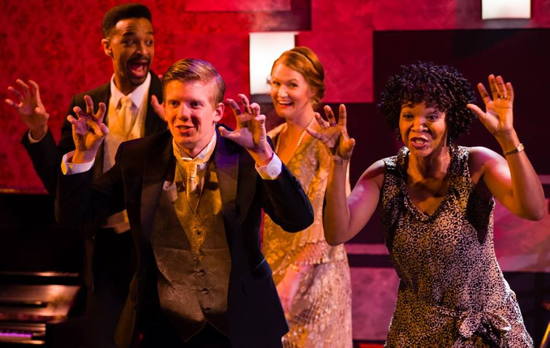 Irving Berlin, a Russian Jewish immigrant, is one of the greatest composers of American music in the history of our young nation. His songs have stood strong for the last one hundred years and the In Series is promising to make sure that we don’t forget them. ‘Irving Berlin: A Simple Melody’ is a lighthearted radio show style cabaret that takes audiences on a journey through this remarkable music.

The cast consists of Elizabeth Mondragon, Jaely Chamberlain, CJ David, Jarrod Lee, Garrett Matthews, and Krislynn Perry. These six singers make up an excellent ensemble that blends well vocally and carries a great chemistry on stage. Reenie Codelka acted as music director, pianist, and arranger for most of the music. This fantastic team of artists created a musically complex and compelling show.

‘Irving Berlin: A Simple Melody’ was an excellent reminder that music brings us together…

Bari Biern wrote a sweet script to link the music together that gives audiences the opportunity to see into the world of Berlin’s daughter, Mary Ellin. She told stories while the radio played. It was a touching experience. Abel Lopez directed the show simply but with great charm as the singers would flow about the stage seamlessly.

Mondragon played the role of Mary Ellin with a sweet graciousness. Her voice rang out clearly and she especially shined on Berlin’s ballads. Mondragon’s performance carried the show and gave it a strong through line. Her performance of “Always,” I felt, left most of the audience feeling teary.

Chamberlain filled the role of the sweetly sexy woman from that era. She has a strong soprano and she dominated the pieces “You’d Be Surprised” and “Say it Isn’t So.” Chamberlain also had a duet with each of the men and she led each of them on in a unique flirtation.

David was the cheery boy of the group. His sweet smile brightened the room and his lovely tenor was so sweet to hear. He also acted as the lead host of the radio program. David led most of the show. He did an especially excellent job on “A Pretty Girl is Like a Melody” and his duet with Matthews on “Heat Wave.”

Lee played the more mature and sultry of the men. Unfortunately, his sensual bass was not featured often but he did solo on “How Deep is the Ocean,” which was a truly beautiful performance. He also partnered up with Perry on “Anything You Can Do” from the classic musical ‘Annie Get Your Gun.’ They made an excellent team and brought a new humor to this Broadway classic.

Matthews filled the role of the quirky, comedian, character actor, that always partnered with Bing Crosby in the Irving Berlin films like ‘Holiday Inn’ and ‘White Christmas.’ He was an excellent actor as well as having an effortlessly charming voice. His stand out performances were on songs like “Let Me Sing and I’m Happy” and “Blue Skies.”

Perry was the alto of the group and she brought a great deal of sass and depth to the show. The most powerful moment of the show was when Perry steps on stage as Ethel Waters singing “Supper Time.” It was an emotional and heartfelt performance that transformed the mood of the evening by reminding us the state of the world at the time Berlin was writing. Perry brought a new level into the production that was strong and vibrant.

‘Irving Berlin: A Simple Melody’ was an excellent reminder that music brings us together, no matter what may be pulling us apart.

Running Time: One hour with one intermission

‘Irving Berlin: A Simple Melody’ runs through January 28, 2017, at the Source Theatre. For tickets and more information click here.