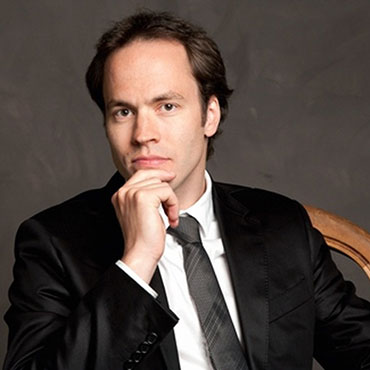 No matter what your personal feelings were on Inauguration Day, the Baltimore Symphony Orchestra under the baton of guest conductor Johannes Debus demonstrated that the world keeps turning – and that musicians keep playing – with their thrilling and masterful performance of Brahms Symphony No. 1 at Joseph Meyerhoff Symphony Hall on Friday, January 20, 2017.

The program opened with Rossini’s well-known Overture to The Barber of Seville. I was immediately struck by Debus’ gentle and tender conducting that drew the orchestra into lovely breaths after each phrase. Debus pulled the orchestra into an opening crescendo that tapered back to quiet momentum without hitting maximum volume – a wonderful strategy to keep the audience engaged and eagerly awaiting the full force of the orchestra.

I was particularly impressed with the beautiful French horn solo in the middle of the piece that bounced up on a flurry of very clean staccato notes into a more lyrical melody. I also enjoyed the graceful transition of the orchestra as Debus led them from the louder section of the piece to a whispered downbeat on the entrance of the following, quieter section.

While I felt that some of the faster runs in the middle of the piece were not as nuanced as they might have been, overall I found that the Overture was thoughtfully conducted and well-performed.

The second piece on the program was Beethoven’s Piano Concerto No. 2, played by guest soloist Jean-Efflam Bavouzet. As soon as the piece started, I immediately understood why this concerto had been paired with Rossini’s overture. The introductory orchestral section was very reminiscent of the overture, with its alternation of loud accents and smooth lyrical moments, marked by playfully dotted rhythms. This is Beethoven, though, and the initial cheery mood only lasted a few moments before Beethoven’s spectacular moodiness came out with minor melodies and foreboding themes.

I enjoyed Bavouzet’s liquid tone on the piano. I especially admired his technique of finishing grand phrases with a large flourish, raising his arms dramatically off the keyboard. That wasn’t for show; like a follow-through in sports when throwing a ball or swinging a racket, the physicality of his motion infused the final notes of his phrase with energy and spirit.

The orchestra performed masterfully throughout the concerto. Their pianissimo towards the end of the second movement, which was the quietest part of the piece, was exquisite. Debus had the BSO playing quieter than I’ve ever heard them play before, and I’m a frequent attendee! What I loved is that the orchestra didn’t lose their musicality within the pianissimo, which is incredibly difficult to achieve and why the BSO musicians are so exceptional. There was also a lovely flute solo at the end of the second movement with beautiful tone singing out over the subdued strings.

Bavouzet gave a very lyrical and proficient performance but I do wish that he might have done more to vary the character of each movement. To me, the piano part sounded very similar from movement to movement while the orchestra captured more of the shifting moods and intentions to make each movement sound distinct. I would have enjoyed seeing some more interplay between the musicians as well to make the performance feel more collaborative and like a dialogue between the piano and orchestra. Bavouzet’s performance was very good, but I would love to see it become transcendent.

The shining moment of the evening was Brahms Symphony No. 1 which Debus conducted with exceptional mastery and brilliance. He continued to impress me with the pianissimos he pulled out of the orchestra as well as with his organic control of phrasing; he had the orchestra raise and lower the volume of each phrase as naturally as one might speak or let out a breath.

Debus has worked extensively in conducting operas (he is currently the music director of the Canadian Opera Company) and his rich vocal experience clearly enhances his conducting style. Debus pulled each phrase out from the orchestra as one might sing it, with a stronger note here, some faster notes there, and a slightly held note in rubato tempo there. He had the orchestra singing their way through each phrase in the most natural way and it breathed life and movement into the entire symphony.

I was especially impressed with how clearly my ear could distinguish different sections and musical ideas within each movement. In all honesty, I usually don’t like Brahms because he is so full of notes and complications that I find his music difficult to follow and it wears me out. However, I was not familiar with this symphony and yet it made perfect sense to me. Rather than overwhelming my ears with an assault of nonsensical notes, Debus had a very firm grasp of what the “big ideas” of each movement were melodically, and somehow he kept that clearly established while still conducting the tinier phrases and melodies within each larger thought with nuanced detail and precision.

I was indeed overwhelmed by the end of the symphony, but it was by the masterful and emotional musical performance that I had just experienced! The changing moods and emotions were all perfectly brought out, as were the shifts in style and technique. Be wary of Brahms no more, music patrons! Maestro Debus will win you over.

The Baltimore Symphony Orchestra performs Brahms Symphony No. 1 tonight at Music Center at Strathmore and tomorrow at Joseph Meyerhoff Symphony Hall. Reward yourself with this musical gift! You will not regret it.

Running Time: 1 hour and 50 minutes, with one intermission.

Baltimore Symphony Orchestra performs Brahms Symphony No. 1 through January 22, 2017. For more information and for other upcoming programs, click here.