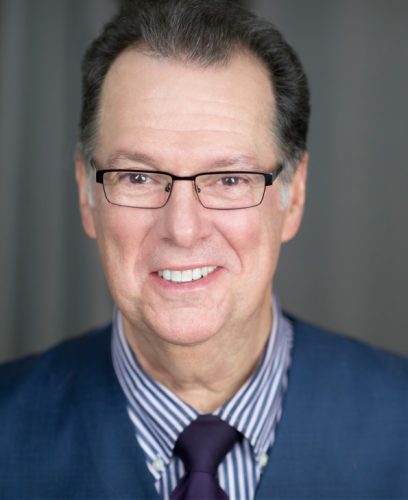 Eric Michael Gillett was the ringmaster for Ringling Bros. and Barnum & Bailey Circus from 1987-1998. For over 10 years this legendary ringmaster ignited the hopes and dreams of children from around the world with his gleaming smile, commanding presence, and powerful singing and speaking voice.

Yes, I was one of those children that looked up to him as a hero. In fact, I kept a letter and autograph photo he sent to me after I had sent him a piece of fan mail.

As you may have heard, the producer of the circus Kenneth Feld said yesterday in a letter on January 14th, “After much evaluation and deliberation, my family and I have made the difficult business decision that Ringling Bros. and Barnum & Bailey® will hold its final performances in May of this year.”

It is sad that think that future children won’t have the experience of the “Greatest Show on Earth.” 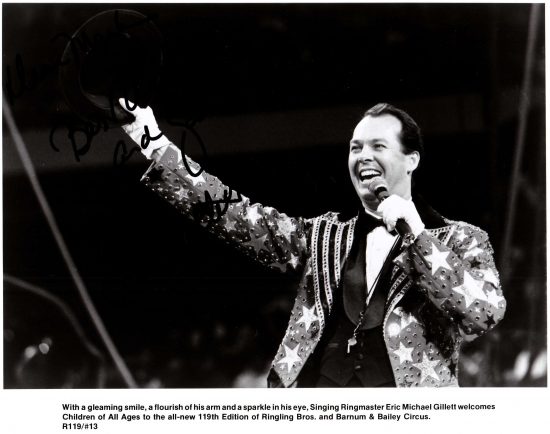 I reached out by email to Mr. Gillett asking him to put together some thoughts on the circus.

“People say theatre is a family. They’re not entirely wrong but, for me, it’s more like a small community. You know most everyone but you’re not intimately involved in their real lives with the exception of those few with whom you’re extremely close. That said, I love the theatre community, but I adored my circus family, for that’s what they really were and remain for me. I was the 27th Ringmaster in what was then the 117 year history of the Greatest Show on Earth. I held that position for 11 years, returning briefly for a period in what would have been a twelfth year to help out when my colleague, Jim Ragona, became ill early in a new tour. Being a part of an American institution had its giddy ups and it’s equally emotional downs. But through it all, you had a family who cared and gave every bit of their heart and soul to their audience and to each other. 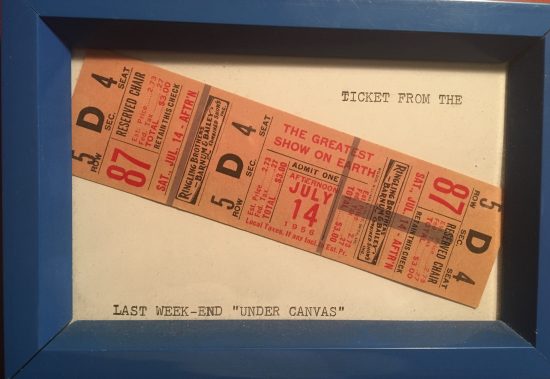 I keep on my desk a ticket from the final weekend that Ringling Bros and Barnum & Bailey ever played under canvas. It’s dated July 14 1956. I would have been 4 years old. I keep it on my desk and in every dressing room I inhabit as a reminder that time passes and things change, that you can’t go home again and regretting your past is a waste of energy. It reminds me to hold dear and close to my heart the incredible store of memories the Big Show gave to me. My mother, rest her soul, was able to travel with me during my last year on the Red Unit, and it was the best year of our lives together. I performed for the royal family of Monaco, thanks to David Larible, the star clown who became my comedy mentor and my partner in crime for so many adventures. I sang at the weddings of my fellow performers who now have children and grandchildren of their own who carry on the circus tradition all around the globe. I had the privilege of announcing for the legendary Gunter Gebel-Williams, who taught me more about showmanship and, more importantly, compassion than anyone I have ever known. And I carry with me, every single day, my love for the incredible friends I made in my time on the road.

And, finally, the circus brought into my life, the single most significant relationship I have had in my career. It introduced me to Benjamin Hughes and his family. How could I know that encounter would lead to a thirty-year friendship and would be the first step on the path to Benjamin House, a home for mentally disabled adults in Elizabeth City, NC, where I spend a bit of every August and every Christmas supporting the Hughes family and their vision for a safe and nurturing environment for their wonderful residents? All of this, and so much more, was made possible when I said ‘yes’ to my circus contract back in 1986. I salute my colleagues and my friends in the industry and I wish them Godspeed. “May all your days be circus days,” was a mantra for a very real thing back when I was on the road. Now, I suppose, it will be a metaphor, a hope for a life filled with hope, with challenges to be met, and a willingness to proceed, as my friend Diane Schumaker-Krieg likes to say, as if success is inevitable. Because that’s what circus folk do. They attempt the impossible and make that impossibility a reality.” 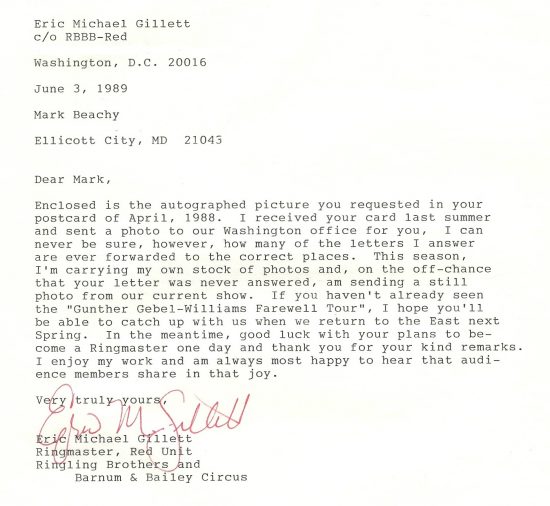 A walk down memory lane:

“Mem’ries…light the corners of my mind…Or what’s left of it! With the sad news of the impending closing of one of the great American entertainment institutions, it seemed only appropriate to take a short walk down memory lane.

From Christmas 1986 to Thanksgiving 1997, my life and my heart was The Greatest Show on Earth. I can still remember the phone call from Ron Severini asking if I was interested in doing some musical festivals for Feld Entertainment. I was booked, so we never connected at the time. But not long later, June Forsythe (ah, the years have wrecked my memory so that spelling is probably incorrect…no disrespect, June) called and asked if I’d meet Kenneth Feld over at a hotel on the Las Vegas Strip. I was floating in a pool with a lot of showgirls at my friend Bud Dickey’s house at the time and had shaved my head for a role I was playing in a production of “Gypsy” that was opening at the Union Plaza that week. 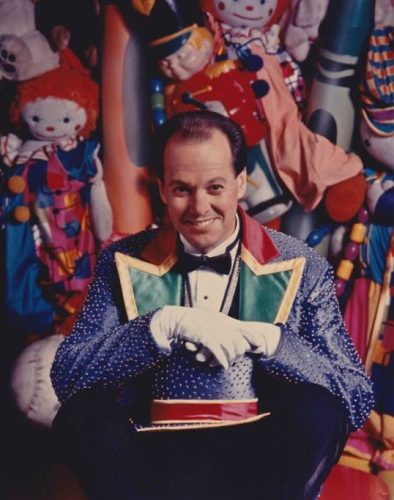 I made the trek to the hotel in the blinding summer heat and sat in Kenneth’s suite while he chatted at length with someone in, I believe, China. And then the journey began. “Would you be interested….” were the words that started it all. Having just come off a two year run in Moulin Rouge at the Hilton and, before that, a two year stint with Hallelujah Hollywood at the Grand, I was not inclined to accept. But accept I did, and Thanksgiving 1986, I headed to Venice FL and my first winter quarters. When it officially ended for me, the Big Show was in Chicago and it was Thanksgiving 1997. And there was a lifetime packed into those years.

By the time I left Ringling and headed to NYC, I had spent almost a quarter of my existence on this planet living and breathing a way of life that is now, sadly, coming to an end. But it won’t really. Because there are circuses everywhere in the world. Because there are circus artists creating and building and making magic in every corner of the globe. Because people like Kevin Venardos joined this merry band and found a dream into which they could pour their passion. Because circus is, and always will be, a state of mind, as well as a lifetsyle, a profession, and craft. I refuse to mourn this day. Nor will I mourn when the Big Show takes its last bow. I will celebrate it in my heart and remember the gift it was to be associated with something so magical and to have entered the hearts and lives of so many. Thank you for letting me be a small part of this incredible legacy.”