Theatre Review: ‘As You Like It’ at Folger Theatre 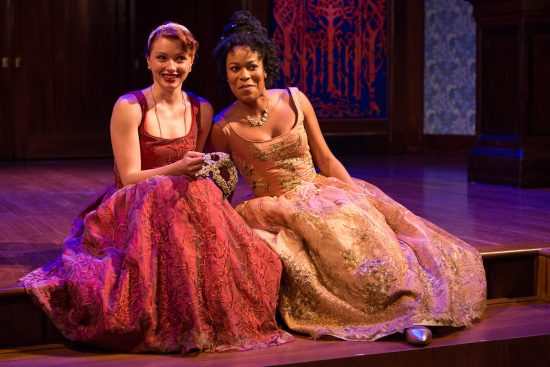 Rosalind (Lindsay Alexandra Carter, left) and Celia (Antoinette Robinson) in Folger Theatre’s “As You Like It.” Photo by Teresa Wood.

All the world’s a stage, as the saying goes, and the players at the Folger Theatre do a very nice job of bringing Shakespeare’s words alive. The company’s new production of “As You Like It” boasts an original vision of one of the Bard’s best, featuring uproarious comedic performances.

We open on a dukedom troubled by family rifts. Duke Senior has banished his brother, Duke Frederick, while nobleman Oliver also seeks to drive out his better-liked brother, Orlando.  The latter falls in love with Rosalind at a chance meeting, right before her uncle, Duke Senior, decides to expel her as well. Exiled, Rosalind flees in the Forest of Arden dressed as a man, accompanied by her cousin, Celia. Much of the rest of the cast follows, and thus begins the romantic adventures in Shakespeare’s gender-bending comedy.

… “As You Like It” boasts an original vision of one of the Bard’s best, featuring uproarious comedic performances.

As directed by Gaye Taylor Upchurch, the play could be characterized as “mixed media,” with a constantly evolving tone and diverse stylistic vision. The first half feels poignant and subdued, reflecting the alienation of the exiled court in the forest. This emotional atmosphere is underlined by an excellent bluegrass composition courtesy of Heather Christian which was excellently performed by the ensemble. This sad beginning gives way to a second half that is dominated by concentrated physical comedy.

Upchurch is supported by a well-coordinated design team. John McDermott as set designer creates an understated Arden through a simple iridescent cut-out backdrop and two illustrated panels that luminesce to match the emotional tone of a scene. Eric Southern’s lighting and Charlotte Palmer-Lane’s convertible costumes cooperate to register quick scene changes, as when Duke Frederick’s comrades transform to Duke Senior’s court in an instant.

The diverse costuming and Alexandra Beller’s choreography reflect the eclectic style of the production. Palmer-Lane’s court is masked, and are suited and skirted elegantly, without pointing to any specific time period.  Beller’s choreography for the court dancers is sleek and structured. Clothes and dance both become more organic as the play finds its way into the rustic space of Arden.

The design team and cast make good use of the beautiful proscenium-style theatre, sometimes entering from behind the audience, the better to interact with audience members at key comedic moments. There was a minor blocking issue when Celia, in a pivotal scene, faced away from the audience and could not be heard clearly.

Without a doubt, this production benefits from incredibly strong casting. Lindsay Alexandra Carter convincingly portrays Rosalind’s sincerity and her growing confidence when disguised as Ganymede. Antoinette Robinson as the more-grounded Celia is delightful, offering some of the most authentic line readings of Shakespeare I have ever heard. The rapport between the cousins leads to some of the best scenes in the production, as the female leads alternately shriek about potential lovers, and philosophize about the place of women. Tom Story as Jacques, “Monsieur Melancholy,” is reliably sardonic, and Allen McCullough toggles expertly between the brother Dukes.

Supporting performances shine very bright and lead to a guffaw-laden post-Intermission. In a tour-de-force performance, Aaron Krohn as Touchstone runs verbal and literal circles around everyone. Dani Stoller as the scorned, and scorning, Phoebe infuses much enjoyable snark into her lines and also demonstrates a keen intuition for physical comedy. The humor builds to a satisfying, marriage-heavy conclusion.

Right before the curtain rose, I looked up to find the famous words from the play I was about to see painted on the ceiling: “All the World’s a Stage.”  If that is true, then the part I play is to say that this was a genuinely entertaining production that will be enjoyed for incredible standout performances.

Parental Advisory: Children under the age of four are not permitted in the theater.