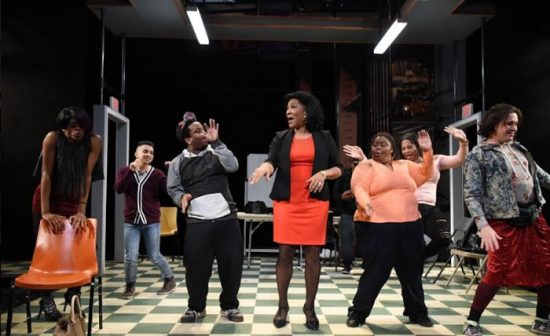 B’Ellana Duquesne as Mama (center) and members of the ensemble of ‘Charm’ at Mosaic Theater Company of DC. Photo by Stan Barouh.

Watching President Obama’s farewell address from Chicago this week was an occasion to think of all the progress we have made in this country over the past eight years—as well as the vast, unfinished business that remains.  The coming years may see serious challenges, but we can count on the artists in our community to point the way towards greater inclusiveness, understanding and compassion.

This season, Mosaic Theatre has made the challenges facing today’s youth a special focus—’Milk Like Sugar’ was a touching portrait of young women struggling with questions of identity, motherhood and maturity.  Now with ‘Charm,’ Phillip Dawkins’ touching portrait of Chicago activist Mama Gloria Allen, Mosaic has proven once again what a vital force the stage can be in opening our eyes, starting the conversation, and empowering those who have felt marginalized for too long.  Performed with humor, love and raw emotion, we get a powerful reminder of what lies ahead for us as we try to understand the hidden complexities of the human soul.

Set in the Center on Halsted, which has served the Midwest’s LGBTQ community for decades, ‘Charm’ features a story that is at once real and inconceivable (in The Princess Bride sense of that word); a transgender woman determined to teach classic upper-crust, Emily Post-style manners to an unruly circle of Chicago’s homeless, transgender youth.  Director Natsu Onoda Power has assembled a high-octane cast, anchored by the inimitable B’Ellena Duquesne as Mama, with performances that take audiences on an unforgettable emotional roller-coaster, and which—I hope—will open everyone’s eyes anew to some of our city’s most vulnerable neighbors.

…Mosaic has proven once again what a vital force the stage can be in opening our eyes, starting the conversation, and empowering those who have felt marginalized for too long.

We are confronted by the complex world of gender identity right off the bat, as Mama meets the building manager D (the cocky, self-sure Kimberly Gilbert); D’s refusal to even acknowledge a gender is reflected in ‘their’ single-letter name (and, I should add, in ‘their’ choice of pronoun).  Things go from complex to beyond as Mama’s etiquette class assembles; for the untrained eye (and yes, this play is a must-see for the untrained eye), it looks to be occupied mostly by straight interlopers who are only there for the free pizza.  One of the funniest moments of the night comes at the conclusion of the first class; Power choreographs a mad grab for the slices that is, well, let’s just say, gender-neutral in its ferocity.

At first only a couple of these young people appear, outwardly, to be bona-fide ‘members of the club’ so to speak; as Dawkins’ play unfolds, however, it becomes painfully, compellingly clear that everyone belongs there, either because of the transitions they are undergoing or because they want to encourage someone they love and offer their support.  The identities revealed are many, in some cases plural, in others they seem to be in flux—Duquesne herself is transgender, but in a recent interview she openly acknowledges that another, male identity is a part of her as well.

Standout performances include Duquesne, whose quiet dominance of the stage marks a transition of sorts from a bona-fide DC personality to polished stage performer.  As Ariella, one of Mama’s star students, Nyla Rose lights up the stage with her spunk and emotional power; Jade Jones, likewise, is compellingly vulnerable as Victoria.  What truly blew me away was Clayton Pelham Jr.’s turn as Beta, the outwardly macho dude whose tough, seemingly impenetrable exterior hides incalculable sadness; Beta’s confession alone makes the evening worthwhile, not just as a study in fine acting but as a reminder of how much we lose when we judge a book by its cover.

Dawkins draws his portraits of each character with sensitivity and restraint; because even within the safe confines of a Center on Halsted classroom, the stories often go untold and are only revealed as painful secrets.  Mama, it turns out, has her own share of secrets, but they only serve to bind her more firmly to these young people and their well-being.  Her clarion call, “I see you” – a heartfelt moment of outreach and recognition—reminds us how often we mistake others, looking through them or, worse, focusing on the surface of self-presentation without inquiring about the human being inside.

So many of us prefer the easy categories—even progressives are prone to make the mistake of clicking off a box or two in the back of our minds the minute we see a pair of platform heels or micro-minis.  Dawkins shows us the importance and the rewards of stopping to listen, to break bread, maybe have a cup of tea with members of this community.  ‘Charm’ is a vital, timely contribution to our ongoing dialogue and our constant strides towards a more perfect union.

NB:  Etiquette fans will be delighted to learn that Ms. Post herself makes a cameo here, and is given her due thanks to Joe Brack’s solid, understated portrayal.