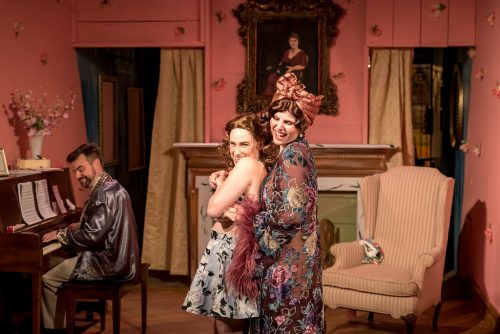 Wow! What a way to kick off the season a fantastic cast and a truly unforgettable show, pulling off a mixture of comedy, tragedy and regret.

The Stillpointe may be one of the smaller theater spaces in Charm City, but it’s production of “Grey Garden’s” features one of the most talented casts I have seen in the city. The theater holds about 32 people, so the setting is intimate and friendly. Stillpoint’s mission is to push the boundaries of performance, and they succeeded with “Grey Gardens” this show and cast would not be out of place on a Broadway stage.

…a fantastic cast and a truly unforgettable show…

“Grey Gardens” opened on Friday, January 13th as the theater announced the expansion of the Stillpointe on N. Charles street into the adjoining building known as the Mercury Theatre.

“Grey Gardens” is the story of Edith Bouvier Beal and her daughter Edie. Edith was the first cousin of Jacqueline Kennedy Onassis. Bouvier Beal was a socialite and amateur cabaret performer. The relationship between mother and daughter was a tense and eccentric affair.

The women’s lives changed from the privileged upbringing they knew to living in squalor when Edith’s husband left her. Dwindling away the little allowance she had after being essentially ripped off by a family member she continued to live in her Hamptons home. The flea invested 28 room house with cats, raccoons, garbage piled and daily singalong rituals.  After national attention in 1971 when the health department raided the home, cousin Jackie came to the rescue, paying for the house to be cleaned up.

In 1975 the women were featured in a documentary about their lives by Albert and David Maysles.

Act 1 looks at the lives of the women living in the lap of luxury and is set at the Stillpointe. The set is simple and elegant, the lighting adds to the opulence of the home. It is furnished with items you would expect to see in a luxurious home in the Hamptons in that era, including a piano.

Christine Demuth plays Little Edie. Her performance is mesmerizing. She plays the young woman with grace, elegance, and lot of sarcasm. Her comedic timing is perfect. Her voice is strong and despite her constant battle with her mother to get into the limelight she makes her presence known.

Zoe Kanter plays Big Edie. Kanter’s voice is enchanting. She epitomizes eccentricity and privilege in her performance. Less concerned about an upcoming party or the potential engagement of her daughter, more interested in the songs she should perform for her guests. The women’s voices work exceptionally well together, and the characters develop quickly to show there is love but also disdain between them.

There is no weak cast member in this show. Adam Cooley plays the debonair Piano accompanist Gould. All I can say is great casting. His voice is amazing; I felt at times as if I was in a private cabaret show with the excellent voices performing in perfect harmony. Cooley holds his character throughout Act 1 and dare I say it; he pulls off the silk dressing gown! Not an easy task.

Mayor Bouvier played by Barney Rinaldi looks so comfortable in that era. His quippy lines and strong voice make his performance noteworthy. He has some great one-liners and delivers them with exceptional timing.

As we moved next door to the Mercury Theatre for Act 2, this show just keeps getting better.

The scene is set in the “Grey Gardens” house in not so affluent times. The Kennedy’s are gone as are the socialite friends brightly colored walls and perfectly manicured lawns.  Cast members worked with the imitation felines – lots of them to create the cat ridden home. Papers and trash piled high, dirty, ripped bed sheets makeshift cat beds and visitors wore flea collars to the home to prevent being bitten. This set is fabulous.

Aging and not the beauty she once was Big Edie is played by Danielle Robinette in Act 2.  With a lot to live up to from Act 1, Robinette blew me away.  Her less than attractive appearance made up with incredible stage makeup to give her the old withered look, her braless un-kept appearance all added to the storyline. Her voice is distinctive, strong and she controls it beautifully and while the story didn’t allow I wanted to hear her sing more songs.

Demuth impressed me in Act 1 but she comes into her own as Little Edie in Act 2 portraying a very eccentric once beautiful socialite, looking back on her fractured self. A truly outstanding performance.

A five piece band supported the cast under the direction of  Pianist Ben Shaver. Quite the task to take on such an ambitious musical, but the band didn’t falter.

Don’t wait to grab your tickets for this must-see show. You can check out the theater’s website here for ticket information.