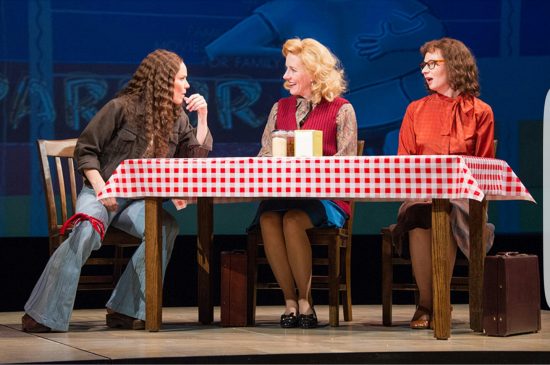 As the United States adjusts to a new administration and an uncertain future, and millions of women march in solidarity around the world, one play emerges at a pivotal time in our nation’s history. “Roe,” an exciting and thought-provoking new drama by Lisa Loomer making its DC debut at Arena Stage, centers on the landmark U.S. Supreme Court case Roe v. Wade and the unprecedented 1973 decision legalizing abortion, an issue that incites great division and controversy to this day.

“Overall, “Roe” resonates without taking sides on the issue, and instead provides a compelling case of both perspectives that will inspire meaningful discussion…

The powerful story, directed by Bill Rauch, follows the divergent life paths of two very complex and determined individuals, plaintiff Norma McCorvey, the rebellious woman behind the alias Jane Roe, played by Sarah Bruner, and attorney Sarah Weddington, skillfully played by Sarah Jane Agnew. Here we have two very talented actors who are convincing and mesmerizing in their roles, and who easily capture the audience’s empathy as they embark on deep, personal transformations that take place over several decades–McCorvey, once a restless spirit with no direction does a shocking midlife 180 to support pro life, and Weddington, a driven and unyielding lawyer from Texas, who ends up with only more conviction for her cause and advancing political ambitions.

Other standout performances include Jim Abele who takes on a trio of roles; Ron Weddington, Jay Floyd and the relentless Flip Benham, the evangelical Christian minister who accuses McCorvey of being responsible for the deaths of over 33 million children. Susan Lynskey embodies an endearing Linda Coffee, the often overshadowed attorney in  Roe v. Wade, while Kenya Alexander who plays Roxanne, represents a new generation seeking guidance around abortion and the moral quandary of life and death.

Despite the weighty subject matter, there are light-hearted moments, especially from Bruner’s Norma McCorvey, who relaxes the mood with a funny quip here and there, and Lynskey who plays the affable, self-aware and crowd-pleaser Linda Coffee.

The creative team of Set Designer Rachel Hauck, Costume Designer Raquel Barreto and Lighting Designer Jane Cox artfully capture the changing of the times with accurate framing of the 70s to Reaganesque 80s up to now with realistic settings ranging from a noisy bar to an apartment, pizza spot and a clever, streamlined use of seating for the Supreme Court. In addition, the use of actual voice overs from Justice Thurgood Marshall and others are also effective in creating a sense of time and place.

Overall, “Roe” resonates without taking sides on the issue, and instead provides a compelling case of both perspectives that will inspire meaningful discussion for some time to come.

“Roe” runs until February 19, 2016 at Arena Stage at the Mead Center for American Theater in Washington, DC. For more information and tickets, click here.