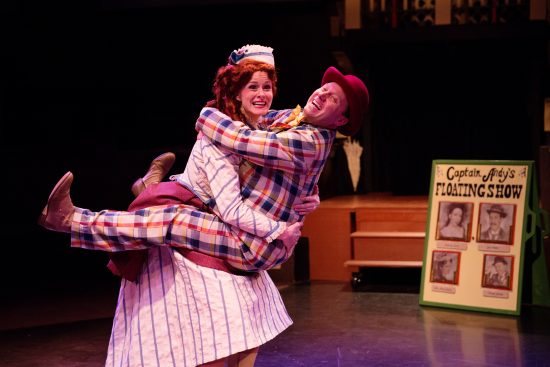 It was a delight to see so much talent on stage as I ventured aboard the Cotton Blossom at Toby’s Dinner Theatre.

Somehow it felt like I was visiting family and long time friends, but that can’t be as it was my first visit to this fabulous venue in Columbia. The welcome was warm, inviting and friendly from the moment I crossed the threshold, and wow did that food smell good.

A dinner theatre venue like Toby’s doesn’t last unless it has a proven track record for excellence and Toby’s certainly has that.

Since 1979 Toby Orenstein has been the Artistic Director and owner of the Theatre in Columbia. 38 years, 200 productions and too many accolades to mention this venue needs to be on your go- see list.

On Friday night I headed out to Toby’s to watch “Showboat.”

You don’t have to stress about parking or moving from dinner venue to the theatre; it’s all under one roof. The dinner is buffet style and the selection from the salad bar to the plethora of desserts on offer was impressive and delicious. I may or may not have gone back for seconds; it would be wrong of me to indulge that information.

Keeping with the theme of the era, there was Cotton Blossom Broccoli, Ol Man River Rice, Mississippi pot roast and so much more. Piping hot and mouth watering! The staff from the box office to the table servers are friendly, and nothing is too much trouble. My lovely server explained how the evening moved along, took my intermission order and the lights went down.

The buffet is cleared to reveal a large performing area and the performers use the space and entrances well to take the audience from boat to shore. Props are brought on and off the stage with ease and help to set the scenes.

Directed and Choreographed by Mark Minnick and Co-directed by Orenstein nothing in this performance is out of place. Minnick knows this venue, the space he has to create compelling yet simple choreography, the sound was crystal clear and perfectly balanced and the lighting- well it hit the spot.

“Showboat” follows life aboard The Cotton Blossom, a Mississippi River show boat. An American classic, a story of hope, freedom, and love. The ebbs and flows of river life focus on the troubled romantic journey of Magnolia Hawks, daughter of Captain Andy, who runs Cotton Blossom.

I always think the sign of a  timeless musical is the ability to take the songs out of the show and still know what the character is thinking as they sing the song. This show has that in abundance with classics like “Ol’ Man River,” “It’s Only Make Believe,” “Can’t Help Lovin Dat Man” and more.

After a rousing opener, stop! Wait! Is that my server Jeff dancing his way onto the stage?

Don’t panic I haven’t had too much wine. Indeed many of the cast members are also the servers. Wow! Ok, now I am impressed not only by the talent but by their energy to serve dinner, perform in act one, serve drinks during the intermission and jete themselves back on stage for act two. I need a Red Bull (sugar-free of course) just thinking about how much energy and skill that takes.

Abby Middleton plays Magnolia, the beautiful young songstress who falls in love with a stranger only to find herself acting opposite him as she gets a chance to tread the boards in the river boat show. Middleton’s voice is exquisite; she plays this beautiful and fragile character perfectly. A joy to watch.

Sadly, it’s not all plain sailing for her and the dashing Russell Rinker who plays Gaylord Ravenal. Rinker is debonair, handsome and charming with a touch of bad boy and has a voice that will melt butter. That explains where it went! It was an excellent performance from Rinker. The voices of Middleton and Rinker are a delightful combination.

Captain Andy played by Robert John Biederman and his wife Parthy played by Jane C. Boyle are adorable, hilarious and lovingly predictable for an old married couple. Their relationship is an endless flow of humor, sarcasm and great one liners! Biederman and Boyle are a great team.

Life in the public eye may not be as glamorous as you think as Julie Lancione who plays headliner Julie LaVerne finds out. It comes to light that she may have a mixed-race heritage forcing her and her husband, played by Justin Calhoun, to leave the river life they know. Calhoun’s character is a terrible stage actor, kudos on doing a great job at being bad! I think that makes sense. The couple leaves their home onboard the Cotton Blossom and heads north away from the racial issues they are set to endure.

A noteworthy performance from Lancione who is tasked with singing “Can’t Help Lovin Dat Man” she nails it! Lancione has a beautiful and very natural voice that she controls exceptionally well. She is perfect in this role with the blend of the feisty starlet and the warm-hearted friend of Magnolia.

Jeff, my server and now new friend (not Facebook friends yet so it’s not official) is super-talented. His character is whimsical, while at times plays a pivotal role in the direction of the show.  Shankle is adorable, a real performer who dances and sings well and with passion. He doesn’t always wear the pants, though, that’s left to the very feisty and energetic Rayca who as Elle May longs to be the star of the show.  Let’s just say perseverance pays off. She is a skilled performer who adds that awkwardness in her movement as part of the comic double act her and Shankle are creating. Her rendition of “Life Upon The Wicked Stage” was superb.

Life as the hired help is not easy, as the black cotton workers load bales, scrub decks and yearn for a better life in a time of let’s say prickly race issues.

Marquis White didn’t disappoint in his rendition of “Ol’ Man River” as Joe. He had the audience in the palm of his hand with his spine-tingling solo. An outstanding performance. Playing his wife Queenie— Samantha Deininger held her own throughout. A strong performer, she has a powerful and beautifully controlled voice that mixes well with White.

The remainder of the cast, all at times taking on smaller named roles are vocally exceptional and all worthy of a mention. You could transport this show and it’s cast to a Broadway venue and not look out of place. Exceptional! The contrasting voices of the Stevedores played by Andre Hinds, DeCarlo Raspberry, Anwar Thomas were outstanding. Scoundrel Pete, played by Jeremy Scott Blaustein hit some quippy one-liners with great timing.  David Bosley-Reynolds plays Sheriff Vallon in the act one, a strong, bold character with great stage presence.

All this topped off with era appropriate costumes with intricate details and a six-piece orchestra led by Ross Scott Rawlings. The attention to detail is amazing, the lattice work on the steps and the ceiling over the performance area representing the river boats various decks. A flawless performance, when do we leave for Broadway?

Spanning the miles and the decades from Mississippi to Chicago and 1890-1927 this musical is timeless, intimate and it also confronts the issues that still exist today.

Running Time: 2 hours and 40 minutes with one intermission. I lost track of time, it was that good!

You know I can’t resist! All aboard!

“Showboat” runs through March 19th. For more information on the shows and the menus, you can head to the theatre’s website here.