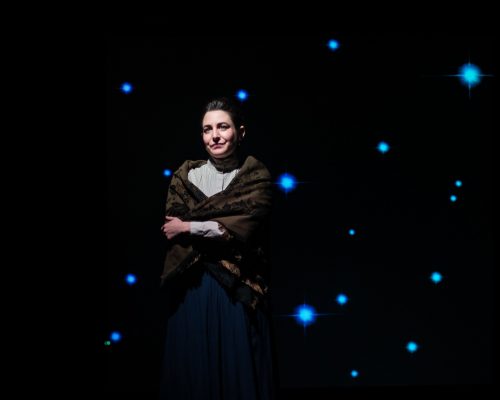 The true story of one woman’s quest to find meaning in both her life and the universe plays out with humor and tenderness in the production of “Silent Sky,”directed by Bill Hurlbut, now playing at Silver Spring Stage.

I was intrigued by the play’s setting in the early 1900s, a time before women in the United States had the right to vote, and by its protagonist, Henrietta Leavitt, an astronomer at Harvard forbidden to use the telescope due to her gender and thus confined to doing the nitty-gritty math calculations that made the men’s telescoping relevant, who nevertheless applied herself to greatness and discovered a mathematical standard that allowed the distance between stars to be measured for the first time.

…a masterpiece of wonder, humor, and bittersweet discovery of the universe inside and outside of ourselves.

While I was looking forward to an informative evening, I was not expecting the wonderful amount of humor and levity this play contained, not to mention the surprise of needing tissues for the tear-jerking final scene! Playwright Lauren Gunderson is to be commended for her witty writing. I was completely enchanted with the script and it was performed with excellence by the actors.

Marnie Kanarek shines in the starring role of Henrietta Leavitt, a woman who wants more from life than either dull “spinsterhood” or a marriage and endless children (remember, birth control was also illegal in the early 1900s!). Kanarek brings so much passion to her performance of Henrietta. I could truly feel not only Henrietta’s frustration at her societal oppression but also her intense adoration of astronomy and her keen desire to use her college education and her brains to do meaningful work in the field she felt “passion” for.

I appreciated how Kanarek brought across Henrietta’s crankiness and lack of tolerance for the patriarchy while at the same time making her truly lovable in her excitement for her work and her love for her sister Margaret, played by Annie Caruso. Margaret is a cheerful homemaker and church musician who sees those occupations as joys rather than drudgery and who can’t quite understand her sister’s love of the stars and devotion to her career. Nevertheless, she supports Henrietta even at personal cost to herself. Caruso conveyed both warmth and affection for Henrietta but also devolved into some bitter anger and resentment and I enjoyed seeing her range of emotions.

Henrietta’s co-workers are played to perfection by Marianne Meyers as Annie Cannon and Mindy Shaw as Williamina Fleming. Meyers, Shaw, and Kanarek are a comedy force to be reckoned with. Their mastery of dry, scathing humor had me laughing out loud through the whole show. Peter Shaw, played by Noah Rich, was their straight man as he set up joke after joke at his expense exposing his (and Harvard’s) misogynistic attitudes towards women in general and towards their three women employees in particular. My only suggestion is that the actors practice pausing after a laugh rather than speaking their next lines through it, as we missed some of their dialogue due to their hilarious delivery of joke after joke.

The play needs the humor, though, to lighten the heaviness of both the women’s oppression and the personal disappointments and setbacks that Henrietta faces throughout her life. I was impressed that although the play ends on a somewhat sad note, it turns the ending into an inspiring and hopeful moment that, much like Henrietta’s beloved stars, shines some light into the darkness.

I enjoyed the simple old-fashioned charm of the set. The straight-forward wooden desks, chairs, and bookshelf drew my attention to the unusual glass slides of the galaxy that were the focus both of the play and of Henrietta’s life’s work. Piano music was used as interludes and again, the simplicity of a single instrument caused my attention to be drawn to the images of the galaxy which were projected on screens on either side of the stage at appropriate moments throughout the show. I found the use of restraint in both the set and the music admirable as it served as a powerful backdrop to focus my attention where it needed to be – on the stars.

As an educator, I especially appreciated that the playbill included two book recommendations for further reading on both Henrietta Leavitt and on her female co-workers at the Harvard Observatory. The lobby also had a very nicely done display of an actual glass slide with stars marked on it as well as historical photographs of Henrietta, Annie, Williamina, and the female observatory workers.

I highly recommend “Silent Sky,” playing through February 4, 2017, at Silver Spring Stage, as a masterpiece of wonder, humor, and bittersweet discovery of the universe inside and outside of ourselves.

Running Time: 2 hours and 15 minutes, with one 15 minute intermission.