Theatre Review: ‘The City of Conversation’ at The Colonial Players of Annapolis 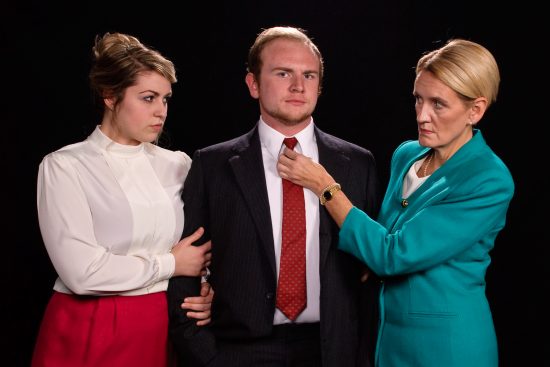 Standing up for what you believe in only leads to ugly battles and betrayal in “The City of Conversation” at The Colonial Players of Annapolis. Directed by Ruben Vellekoop, the timely drama by Anthony Giardina doesn’t tiptoe around politics, rather it reveals the breakdown of one family when partisanship comes into play behind closed doors.

At the center of it all is Hester Ferris, a liberal Washington socialite played by Kathleen Clarke Ruttum, who welcomes congressmen, dignitaries and the ensuing discussion about current events into her Georgetown home. Everything is civil at first. The year is 1979, and fresh from studying at the London School of Economics, son Colin, played by Josh Mooney, is eager to introduce his future wife Anna Fitzgerald, played by Rebecca Gift, to his mother.

Throughout the production, Clarke Ruttum tackles the complex character of Hester with grace and style, and effortlessly displays just the right amount of confidence, concern and conviction, especially when interacting with the strong-willed Anna, who Gift nails brilliantly, never backing down no matter the scenario. Mooney also successfully captures Colin’s vulnerability who seems to be forever in the shadow of his mother and wife.

That same evening Kentucky Sen. George Mallonee (Jeff Sprague) and his wife Carolyn (Carlotta Capuano), along with Hester’s partner Chandler Harris come over and talks of Strom Thurmond, Ted Kennedy, President Carter and racial progress take over, followed by genteel disagreement, and so it goes.

As years fly by, admiration slowly turns into anger and animosity in that living room. Fast forward to 1987 with Ronald Reagan in the White House, and Hester feverishly finalizing a letter opposing the nomination of Robert Bork to the Supreme Court while watching six-year-old grandson Ethan, as Colin and Anna are busy working the Republican agenda in their respective careers. An innocent, everyday encounter–parents picking up their child–quickly escalates into a point of no return, when conversation, unfortunately, turns into silence for decades.

The actors are quite effective as they immerse themselves in the fractured relationship between Hester, and Rebecca and Colin, creating anticipation among onlookers. It’s as if the audience is actually there eavesdropping on on every word thanks to the intimate interiors–a cozy couch, cocktail bar, picture frames hanging on the wall–carefully curated by Set Designer Mary Butcher.

Despite the decades long family divide, hope for Hester finally arrives when grandson Ethan (also played by Mooney) show ups during a surprise visit on the eve of Barack Obama’s inauguration, signaling change for all.

“The City of Conversation” successfully shows how small talk can make way for real revelation and healing, even in the midst of fighting.

“The City of Conversation” runs until January 28, 2017, at The Colonial Players of Annapolis at 108 East Street, Annapolis, MD 21401. Information on this show and the upcoming season are available here.