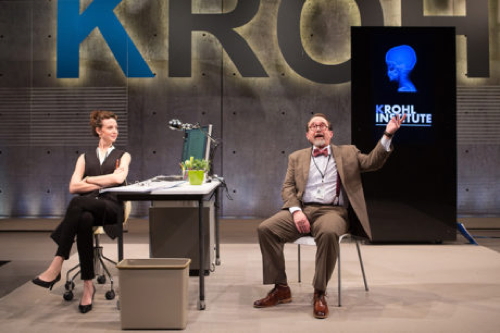 Tessa Klein and Martin Giles in The Hard Problem. Photo by Teresa Wood.

After a tirade from her tutor about the nature of human beings being derived from their status as animals and not from any superiority to the other creatures living in the world, Hilary retorts simply “Explain consciousness.” From the incomparable Studio Theatre, the group that brought “Hand to God” to a regional audience, comes a new play by the equally as incomparable Tom Stoppard. This play is a more realistic endeavor than his most famous work “Rosencrantz and Guildenstern are Dead,” but it doesn’t lose any of the playwright’s wit and charm.

Stoppard’s play is delightfully human and the intimacy of Studio Theatre is just the space to capture that.

Directed by Matt Tourney, of last season’s incredible “Hedda Gabler,” it is ultimately a story of two hemispheres: that of the mind and that of the heart or the soul. It tells the story of Hilary, played by Tessa Klein of last season’s “Chimerica,” a grad student who goes on to earn her doctorate at the Krohl Institute while struggling with the ghosts of her past. Klein is gorgeously truthful as Hilary especially when her character spouts truisms such as “we’re trying to understand other minds when we don’t even understand our own.” Her “we’re all just animals” tutor Spike is played by Kyle Cameron who makes his Washington DC debut. It is in Cameron and Klein’s most intimate moments on stage where the true heart of the play is explored. Cameron manages to toe the line between jerk and sweetheart in a deftly comedic way.

Amal, played by Shravan Amin, who was recently seen in Shakespeare Theatre Company’s beautiful Romeo and Juliet and is very active in DC’s improv scene, is a counterweight to the more emotional Tessa. I wish that we had seen more of the character of Amal, but in what we see, Amin is charming. Nancy Sun plays Hilary’s protégé, Bo. Her contribution to the Krohl is the crux of the plot, and Sun gives the character a wonderful energy. Sun is set to make her feature film debut this summer in “Going in Style.”

Emily Kester, who recently played Eurydice in Next Stop Theatre Company production of Eurydice, plays Pilates instructor Julia and understudies Hilary. I can assure you if you catch a performance where she is standing in for Hilary you will not be disappointed, as she is a phenomenal actress. Ursula, Julia’s direct partner spends a majority of her scenes with her foot in her mouth, but Jones excels in her monologue about the brain worm.
Cathy Beth Hall who plays Jerry Krohl’s darling daughter is a student of Adventure Theatre’s pre-professional program. She lights up the stage with a presence and an intelligence that rivals her more senior counterparts. Broadway Actor David Andrews is fantastic as Jerry Krohl, the Bill Gates of the Krohl Institute. His scenes with the sweet Cathy are heartwarming and truthful.

The Metheny is a beautiful and intimate space and it’s incredible to see set designer Debra Booth tackle a Google-esque high-rise into such a space, complete with Krohl logo. Soho Repertory Theatre costume designer includes subtle references to the character’s pasts, such as Julia’s purple ensembles, reminiscent of “the purple gang” and Ursula’s power leather business outfit. “Cloud 9” voice coach Elizabeth Forte Alman returns for the lovely British accents in the piece, especially challenging considering the length of time between each scene.

It’s hard not to love anything that Studio Theatre puts on, especially working with a writer that artistic director David Muse affectionately asserts with whom they have a “special relationship.” Muse goes on to say “Intimate venues… amplify the human and the personal.” Stoppard’s play is delightfully human and the intimacy of Studio Theatre is just the space to capture that.

“The Hard Problem” is playing now at Studio Theatre through February 19, 2017. For more information, visit online.