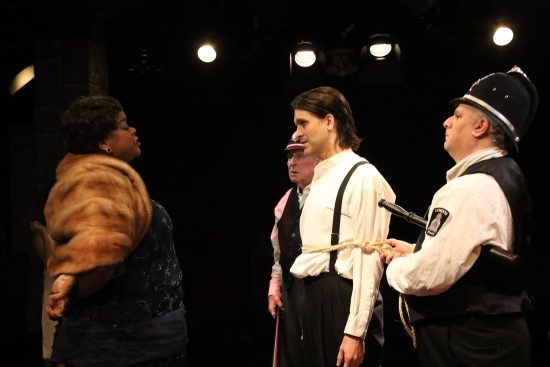 Audrey Herman’s Spotlighters Theatre has built a reputation on going where other theatres fear to tread. And now they’ve jumped in with both feet with their current production, the seldom seen “Three Penny Opera,” Kurt Wiel and Bertolt Brecht’s masterful commentary on societal values, crime, and punishments.  Based on “The Beggar’s Opera” by Jonathan Gray, this sordid tale is given a fine showing this time out.

Captain Macheath, known as Mack the Knife, is a scoundrel of the first degree. He and his band of cutthroats and criminals rob, steal, burn and murder with abandon.  Jonathan Peachum is the manager of a company of professional beggars, composed of the dregs of London street people.  His wife, Celia, and his daughter, Polly live with him at the headquarters.  He’s planning to disrupt the coronation of Queen Elizabeth II by unleashing more than a thousand beggars all across the parade route right up to Westminster Abbey.  Peachum and his wife are not at all pleased to find out that Polly is in love with Mack and has secretly married him, and they scheme to turn him over to the cops.  Polly tips Mack off and he agrees to leave town.  Meanwhile, the High Sherriff of London, Tiger Brown, has a daughter who is also involved with Mack.  Throw in a handful of prostitutes, some more crooked cops, Mack’s henchmen, mix it all together with the biting satire of Brecht’s lyrics set to Weil’s beautifully bizarre melodies and there you have the gist of “The Threepenny Opera.”

Hats off to Spotlighters Theatre and the uber-talented cast and crew of ‘Threepenny Opera’ for bringing this gem to the Baltimore stage.

Director Michael Blum has restored and even translated some rarely performed songs and plots to this production, mostly to great effect.  At more than three hours running time including intermission, the wisdom of the restorations is debatable, but the finished product is quite entertaining and Blum is to be applauded for tackling this difficult piece.  I do wish the pacing had clipped along with a bit more precision, particularly in the scene transitions, but I imagine that those will be addressed as the company and crew settle into a rhythm.

Musical Director Erica Rome and her accomplished side-kick on keyboards, William George, do a great job of evoking the spirit of Weill’s music.  With just the two of them in the pit, the accompaniment transitions smoothly from piano to organ to harpsichord to accordion, frequently all of the above in the same song.  The cast masters the difficult melodies and harmonies quite well under Ms. Rome’s guidance.

Alan Zemla’s suggestive set design is as professional as always, and it’s attentively lit by Al Ramer.  Amy Weimer and Darcy Elliott dress the cast with great attention to the period, both as contemporary beggars and post WWII swells.  There is not much choreography but what there is was well handled by Melissa McGinley.

The evening gets off to a great start with Connor Moore’s rendition of “The Ballad of Mack the Knife,” the most famous melody of the production.  His voice has a lovely and melodic quality and is perfectly well-suited to the piece.  Other standout support comes from Robert Wall as Tiger Brown, himself an excellent vocalist and an even better actor.  As for the company of henchmen and whores, what’s not to love?

Frank Mancino as Jonathan Peachum and Kay-Megan Washington as Celia Peachum are outstanding.  These two have a wonderfully acerbic chemistry and have voices that are reminiscent of the old music halls of London.

Blum has obviously cast with a particular vocal sound in mind from both of the ingénues.  Both Amber Hooper as Lucy Brown and Allison Hicks as Polly Peachum have lovely mezzo-soprano to soprano voices, with hints of coloratura thrown in here and there.  They both shined in their solos, especially Hooper in her aria, “The Poisoning Song.”

Steve Quintilian’s Mack the Knife is the focal point of the production.  His somewhat uneven acting is more than compensated by one of the best vocal performances so far this season.  And when he gets the acting right, he can infuse a scene with a magnetism that is scary and fun at the same time.

Blum opens and closes the production with all the characters dressed as panhandlers, carrying signs into the audience written on the familiar cardboard we know from Baltimore’s intersection beggars, with typical slogans like, “5 hungry kids at home” and “Unemployed Veteran” Point taken.

“Threepenny Opera” is a scathing indictment of how we as a society allow justice to go unserved, how the rich get richer and the poor get poorer and the rest of us turn a blind eye and allow the system to go unchecked.  Productions like this are needed now more than ever. Hats off to Spotlighters Theatre and the uber-talented cast and crew of “Threepenny Opera” for bringing this gem to the Baltimore stage.