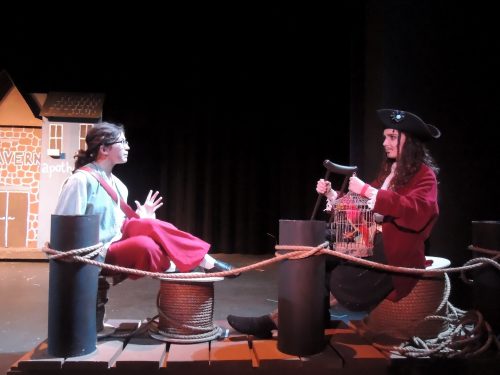 Violent murders, complex characters, and fearsome pirates – in a children’s play? Yes! And, not exactly. I had the delight to attend “Treasure Island” on Friday, January 27, 2017, directed by Jeff Miller at Children’s Theatre of Annapolis, based on the classic children’s novel by Robert Louis Stevenson. However, I use the phrase “children’s novel” with a grain of salt – this is a PG to PG-13 rated book with mature themes and frightening scenarios and when it’s brought to life as brilliantly as the pre-teen and teen actors of CTA do it, this is not a play for your smallest tykes. I recommend this play for third graders and up. There were many younger children in the audience on Opening Night, and they were legitimately (and vocally) frightened, to the point of tears or leaving early.

And well they should have been, which is why I recommend sparing them the distress. From the opening sequence of the play, we are presented with a truly gruesome murder as the nervous pirate Cut Purse (played by 11-year old Malia Segree) pleads for her life with the menacing Captain Flint (played with ferocity by 12-year old Miranda Dameron), only to be ruthlessly cut down by a mob of horrifyingly frightening pirates. This is partly why “Treasure Island” is such an appealing book to ‘tweens and teens – it doesn’t glamorize the darkness of piracy so the plot twists and turns have a deep emotional impact. The violence isn’t meaningless, though, as it offers a foil to the goodness of the main characters and a measuring stick for pirate Long John Silver’s sometimes surprising compassion in the midst of his villainy.

… a dramatic, frightening, and satisfying play performed with a maturity beyond the young actors’ years…

“Treasure Island” tells the story of young Jim Hawkins (played by 11-year old Blanca Martell), who comes into possession of a stolen treasure map through a guest at his mother’s Inn – the bitter, drunken ex-pirate Billy Bones (played by 13-year old Rachel Leonovich). Jim’s friends decide to hire a ship and crew and sail to find the treasure, except they unknowingly hire the band of pirates whom the map was stolen from – and thus, the adventure begins!

Leonovich does a magnificent job with Billy Bones. She was fearsome one minute and funny the next (my favorite moment was when she repeatedly demanded more rum.) I enjoyed Martell’s interactions with Bones as she displayed her fear at his temper yet strove to be a good innkeeper and meet his excessive needs. When Flint’s crew finds their treacherous crew member, Leonovich devolves from commanding to cowardly, with good reason – Billy ends up dead from the consequences of the encounter, which Jim and his mother (played by 13-year old Noelani Segree) barely escape from alive.

13-year old Ryan McDonald was fabulous as old Blind Pew, a pirate who confronts Billy about his theft of the map. McDonald was absolutely terrifying. (The poor tots in the audience who had already been unnerved by the previous murders and the intimidating nature of Billy Bones lost it when McDonald came out. He was the stuff of nightmares.) I loved that McDonald also found the humor in his role and made us laugh as well as shiver from fright.

I was impressed with the performance of 12-year old Siena Landerkin as Dr. Livesy, and I especially appreciated her clear enunciation of her lines. Dr. Livesy was the only character who could and would stand up to the raging Billy Bones at the Inn (before his demise), and she put him in his place with great command and haughtiness. She also provided the calm voice of reason for the heroes of the play; at one point, she mediates the bickering between the ridiculous Squire Trelawney, played with great humor by 15-year old Catie Newell, and the rightfully cautious Captain Smollett, played by 12-year old Haven Hitchcock. Hitchcock infuses so much scorn for her suspicious crew into her performance, and she makes an intimidating and authoritative ship’s captain who nevertheless is full of protectiveness and concern for her honest crew members.

The highlight of the play is the phenomenal performance by 13-year old Arden Tierney as pirate leader Long John Silver. Silver’s role is quite demanding as his character is so morally complex. On one hand, he truly cares for young Jim Hawkins, who happens to be the son of his dead friend. His affection for Jim out of love and loyalty to his father leads him to protect Jim time and again from murder attempts by his crew. However, Silver does not hesitate to slay Tom Morgan, another young innocent on the ship (played by 12-year old Andrew Wilson with a perfect sense of naïveté and anxious hesitation.)

Silver, on one hand, encourages Jim not to despise the menial work of peeling potatoes, with a surprisingly philosophical and meaningful explanation, and he respects the mutually agreed-upon pirates’ code, allowing his crew time to deliberate and negotiate with him when they have grievances. On the other hand, he has no moral qualms about his life of murder and thievery, other than sparing the lives of his closest friends.

Tierney plays Silver with mastery. She can swagger, quote Shakespeare with sincerity, spin a heartfelt tale, manipulate, lie, and show true parental affection with the wide range of emotion called for and with the subtle nuances and control needed to make Silver a believable character. While you might see a resemblance to Johnny Depp’s character of Captain Jack Sparrow, I left the theatre with the odd sensation that Depp was inspired by Tierney rather than the other way around. Well done!

Another stand-out performance is 14-year old Hannah Fishburne as Benn Gunn, a marooned pirate who’s been alone a little bit too long. She’s delightfully eccentric, ridiculous, and over-the-top in just the way the role should be played. I don’t think I will ever buy cheese again without hearing her voice in my ear! 14-year old Cole Ruiz also gave a brilliantly terrifying performance as the murderous and violent pirate Israel Hands.

I enjoyed the variety of sets, from the grand ships to the Inn, the docks, and the island. The sound effects of the water at the docks and the birds and jungle creatures on the island were nice touches. The costumes were also well done in styles authentic to the period, England in the mid-1700s. Fight Choreographer James Jager did a wonderful job designing a number of dramatic combats with a variety of blades and weapons. The ruthlessness of the fighting adds to the overall scary and somber tone of the play. My only recommendation for the play is that some of the actors slow down their speaking. I think nerves probably played a part in a bit of the rushing, but I would like to encourage the children to enjoy the moment and take their time speaking their lines. It helps the audience understand better and gives us more time to laugh and react to your wonderful performances.

I highly recommend “Treasure Island,” directed by Jeff Miller at Children’s Theatre of Annapolis, as a dramatic, frightening, and satisfying play performed with a maturity beyond the young actors’ years, for an audience of adults and children aged third grade and up.