Ballet Review: ‘The Little Mermaid’ by Ballet Theatre of Maryland 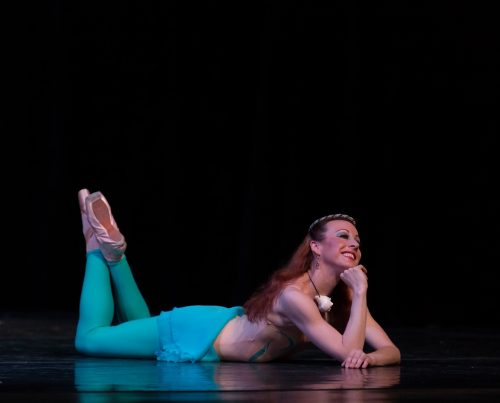 Ballet Theatre of Maryland presented their world premiere of Artistic Director Dianna Cuatto’s original interpretation of Hans Christian Andersen’s tale “The Little Mermaid” on Friday, February 24, 2017, at Maryland Hall for the Creative Arts in Annapolis. Set very effectively to the music of Debussy and Ravel, this imaginative production brought to life an undersea world complete with mermaids, an evil sea witch, fish, and coral, and then brought us above ground to meet a dashing prince, his compassionate tutor, and his loyal sailors and townspeople.

… soak up the magic and become lost in the beautiful dancing and imagery of the story.

The opening sequence took my breath away as a beautiful oceanic scene came to life before my eyes. Coral swayed in the waves, lighted jellyfish floated by, and mermaids “swam” through the sea (carried by blue assistants) in a lovely effect. I did feel that this otherworldly opening sequence ended a bit too abruptly and had an awkward transition into the next scene, but otherwise, it was a fabulous introduction to the story.

The following scene finds the protagonist, Pearl (Nicole Kelsch), who Disney fans would equate to Ariel, dancing with her sisters and her best friend Fathom (Sabrina Schulbach), a conch fairy who embodies the roles of Disney’s Sebastian and Flounder.

Kelsch shines in the role of Pearl. Her movements were light and graceful, especially when she kicks her legs up. Kelsch perfectly expressed the youthfulness, naïveté, and rampant excitement of a 15-year old girl eager to experience life to the fullest. I love how ballerinas are able to express so much attitude with their movements and facial expression in order to convey a story without words.

Kelsch’s lighthearted gracefulness contrasted beautifully with her mother, Queen Atalanta, played by Samantha Lucas. Lucas was regal and powerful, yet loving and protective of her daughters. I enjoyed seeing the lead role changed to a queen instead of a king as in the Disney version and it added more layers to the story to see Atalanta battling with her sister, the scheming sea witch Melusine, played by Alyssa Johnson-Taylor. Johnson-Taylor embodied evil with her slinky leg and severe arm movements. She portrayed raw power and dark might as opposed to Lucas’s restrained and majestic authority.

I especially enjoyed the theatrical touch of Melusine’s evil army wearing red and shaking tambourines. It reminded me of a rattlesnake’s warning of impending doom. Melusine’s partner Aqualion, played by Calder Taylor, also added to the sinister atmosphere with his imposing dancing.

The plot follows Pearl, a young mermaid who is enamored with humans and who is tempted by her vengeful aunt Melusine to pursue Prince Patrick (Alexander Collen). In exchange for receiving human legs, Pearl trades her beautiful voice to her aunt, even though it was her song that enticed the prince when she saved him from drowning. At first, things go well for Pearl; the prince begins to love her despite the fact that she does not appear to be his singing savior.

The overall quality of this ballet was impressive. Each scene had a beautifully rendered backdrop and accompanying props to draw us into Pearl’s world, from the opening underwater scene with Atalanta’s palace to the sails of Prince Patrick’s ship, to the blue skies behind the prince’s castle hallways. The set construction team of Susan Johnson, Calder Taylor, and Aaron Bauer are to be commended for their exquisite painting that brought each scene to life.

Nicole Kelsch’s dancing as Pearl was the highlight of the ballet. In the scene where she first gets her legs, Kelsch is completely wobbly – on pointe! – as she grapples with learning how to walk. She even maintains a wobbly leg and bended knee when she first dances with the prince, which is no easy task as she did it all with perfect intention and never once actually lost her balance through her brilliantly choreographed steps. I was also impressed that Kelsch represented Pearl’s growing maturity with her style of movements. As she begins to fall in love with the prince, her movements became more lyrical and graceful and less ebullient and childlike.

Sabrina Schulbach as Fathom also delivered a stand-out performance. Her steps were quick and hurried and portrayed her constant concern for Pearl, but she also danced powerfully and with great precision. She performed some of the best turns out of the whole troupe as she always maintained her center of gravity and never began to topple over when coming out of a turn. I enjoyed Alexander Collen’s dancing as the prince, but I do wish that his turns were as technically refined as Schulbach’s, as Collen often tipped sideways when finishing a turn and it detracted from his otherwise wonderful performance.

One negative aspect of the ballet, technically speaking, was the unison, or rather the lack thereof, among the male dancers when they were meant to be performing exactly together. I tried to pinpoint if any one dancer was to blame, but it seemed that not even two of the four or six dancers on stage at various times were ever in perfect sync. I would hope that this aspect improves in the future, as it was an obvious error when the movements were so clearly choreographed to be in unison – and, when all of the female dancers performed their synchronized movements throughout the ballet quite well and they often had more technically difficult movements.

The costumes designed by Alyssa Johnson-Taylor were, for the most part, stunning. I loved the creativity of the mermaids’ long pants with fluttering “fins” attached.

The original choreography by Dianna Cuatto was truly outstanding. I was particularly impressed with the storm sequence, where we saw gauzy waves on the ocean, and even saw the prince’s tiny ship (very cleverly broken in pieces and attached to a few dancers) swaying and bobbing as it sunk beneath the waves. The classical musical selections were perfectly fitted to the mood and action needed for each scene and the dance steps brought each character to life with remarkable attitude and vibrancy. I was deeply impressed with this top-notch production and I only wish that it had a longer run so that all of the hard work that went into it could be enjoyed by many, many more viewers because it deserves to be widely seen and recognized for its brilliance.

This production of “The Little Mermaid” is so incredible that everyone should have the chance to experience it and soak up the magic and become lost in the beautiful dancing and imagery of the story. I highly recommend “The Little Mermaid,” choreographed by Dianna Cuatto and performed by Ballet Theatre of Maryland. Unfortunately, it only had a weekend run, but I sincerely hope that this production will be remounted in the future, and for many more performances, as it was absolutely exquisite and a wider audience should have the privilege of attending this enchanting ballet.

Running Time: 2 hours and 30 minutes, with one intermission.

“The Little Mermaid” has finished its run at Ballet Theatre of Maryland. For information on upcoming productions, click here.