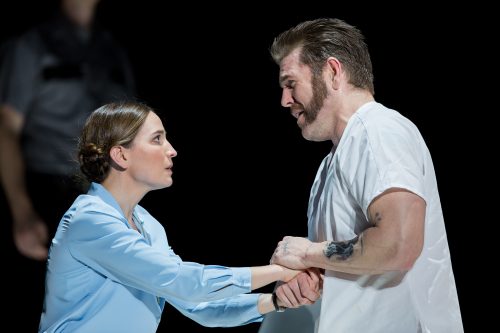 “The truth will set you free.” This was the theme of Jake Heggie and Terrence McNally’s compelling opera “Dead Man Walking.” Based on a true story, “Dead Man Walking” is about a man, Joseph De Rocher, who committed a heinous crime. Sentenced to the death penalty after being convicted of rape and murder, Joseph writes to Sister Helen PreJean asking her to visit him in prison and become his spiritual advisor.

Everything from the orchestra, masterfully led by Michael Christie, to the simple staging and light cues were all to help you focus on the subject material; forgiveness.

The opera opened up on a horrifying rape scene. Artistic director Francesca Zambello deemed it necessary to show the evil act without question that Joseph De Rocher is guilty. This beginning scene is not suitable for children and was difficult to watch. However, we see the unyielding compassion from Sister Helen, played by Mezzo Soprano Kate Lindsey, as she continues to visit Joseph, played by Baritone Michael Mayes, and talk to him about the need for confession and forgiveness. Kate Lindsey made her Washington National Opera debut with this role. Her strong performance helped her through the difficult role with both vocal stamina and emotional tact. Mayes, a tall and muscled singer, had a voice as strong as he looked. He guided us through his burdened and conflicted character making us hate him and forgive him in our own way.

The mother of Joseph, Mrs. De Rocher, played by world-renowned Mezzo-Soprano Susan Graham, brought tears to the eyes when she sang of her love for her son. Any mother could relate to her plea for her son’s pardon. The warm tone in her voice was a comfort that only a mother could give. Graham has a special connection to this opera as she originated the role of Sister Helen PreJean in the opera’s world premiere in 2000.

This opera had no need for colorful sets. Everything from the orchestra, masterfully led by Michael Christie, to the simple staging and light cues were all to help you focus on the subject material; forgiveness. Joseph did a horrible thing, but as we see him interact with his mother and Sister Helen we see how he is not just a convicted criminal but a child who is loved by God.

There are many sides to this story. Sister Helen just wants to be there for Joseph, yet gains the burden of being accused of helping a rapist and murderer. Joseph’s mother who loves her son, and does not want to hear the truth of what he did. The parents of the two teenagers who want to see justice happen for some relief, and Joseph who is afraid to die and also afraid to admit his guilt.

The Washington National Opera’s opening night of “Dead Man Walking” was a tremendous success. In attendance was composer Jake Heggie and librettist, Terrence McNally, as well as Sister Helen PreJean herself who took the last bow of the evening to unending applause.

Advisory: Adult situations and sung in English with English subtitles.