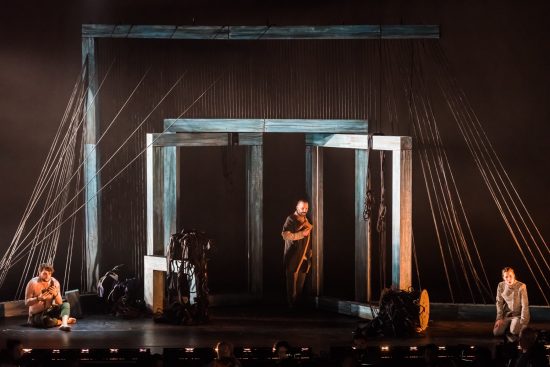 Gaveaux’s opera comique “Léonore, ou L’Amour conjugal” has become something of a historical footnote to Beethoven over the years. Wildly popular in late to post-revolutionary France, its libretto also formed the basis of Beethoven’s only opera, “Fidelio,” a work which has never managed to shake its reputation for being unsuccessful despite its author’s fame. It is a fascinating fact of history that the popularity of Gaveaux’s ‘successful’ opera has overwhelmingly lost out to Beethoven’s ‘unsuccessful’ one. What should be tantalising, however, is that so few modern audiences have ever had the chance to compare the two; Opera Lafayette’s production of Gaveaux’s “Léonore, ou L’Amour conjugal” is billed as “a modern premiere” and is likely to the give the work’s long-term quest for life a huge boost. Directed by Oriol Tomas, and conducted by Ryan Brown, the production is accomplished and sonically ravishing.

The story, written not long after the reign of terror in revolutionary France, tells of Léonore who has disguised herself as a man, Fidélio, in order to gain access to the prison where her husband, Florestan, is being held as a political prisoner. The Jailer, Roc, has promised the hand of Fidélio to his daughter Marceline, not realising Fidélio is actually a woman and when the Governor of the prison, Pizare, arrives demanding Florestan’s death, Roc enlists Fidélio’s assistance to do so. Pizare, who is also responsible for Florestan’s incarceration is concerned that the Minister, suspecting “victims of arbitrary power,” will discover Florestan’s wrongful imprisonment and uncover Pizare’s wrong-doing. Jean-Nicolas Bouilly, who wrote the libretto, claimed the story was true – or at least based in truth – casting himself as the benevolent Minister, Dom Fernando, in his sometimes fanciful autobiography.

While the cast of characters is thinly disguised by Spanish names, the Parisian audience would have recognised them instantly, and enthusiastically responded to the themes of tyrannical leaders, political prisoners and liberation. On the other hand, Beethoven’s audience, in occupied Vienna, for the first performance of Fidelio, would have consisted largely of French military officers, perhaps less receptive to the characterisations of authority, and themes of revolution.

Opera Lafayette is a period instrument ensemble, and the warm, soft but rich tones of the orchestra were well-wrought under the expressive, clear direction of Ryan Brown. Laurence Mongeau’s set is elegant and commanding, but also versatile and particularly expressive under Julie Basse’s evocative lighting design.

The most inspiring music, perhaps unsurprisingly, is given to the role that the composer himself played in the original production, Florestan. Gaveaux was perhaps better known in his day as a tenor. In Opera Lafayette’s production, Jean-Michel Richer balances the fragility of the emaciated prisoner, Florestan, with the richness of an impassioned lover while Kim McLaren’s Léonore is assured and nuanced.

As Ryan Brown concedes, Beethoven’s music is certainly more “complicated” than Gaveaux’s, however, Gaveaux does epitomise an attractive body of work underperformed today, a popular form of lyric theater, which was at its time, perhaps, not far removed from what our modern musical is today, incorporating both spoken dialogue and song, and capable of both levity and loftiness.

Beethoven preferred the name “Leonora” for his opera, however, such was the fame of Gaveaux that the theatres insisted on a different billing for Beethoven’s opera to avoid confusion. It is a situation unimaginable to us today. It is impossible that Gaveaux could ever reach the same standing as Beethoven today, however, “Léonore, ou L’Amour conjugal” is more than just historical curiosity, more than a footnote to Beethoven and a worthy piece in its own right. Opera Lafayette takes on a difficult but noble charge in their exploration of this repertoire, and in the final assessment, there are altogether too few operas that end with a victorious woman admired for her strength and courage and having one more work like this should be a welcome addition to the canon.

Running Time: 1 hour and 45 minutes with one 15 minute intermission.

“Léonore, ou L’Amour conjugal” played at the Lisner Auditorium at George Washington University on the 19th of February 2017 and will be performed a second time at the Gerald W. Lynch Theater in New York City on the 23rd of February. For more information and tickets, click here.