Opera Review: ‘Women in the Dark’ by Peabody Chamber Opera at Theatre Project 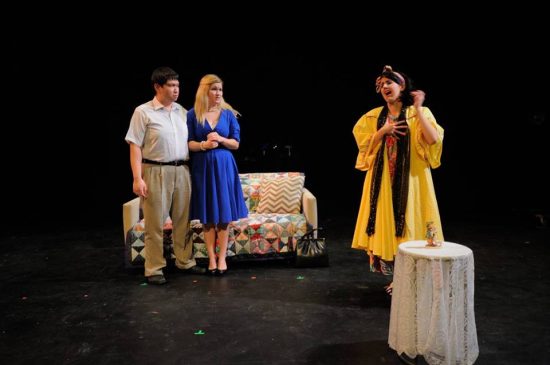 A scene from “Naomi in the living room” Photo Credit: Peabody Conservatory

A rare opportunity to see three short women-centric one-act operas under the heading of “Women in the dark.” They explore the light, the dark, the journey and the transformation. An excellent compilation of operas directed by Courtney Kalbacker. Each one capturing those moments we all face in life as if we are feeling around in the dark looking for the light. A fantastic combination of three operas encompassing a cross-dressing husband, cupid’s badly aimed arrow and the all-consuming pressure of being a woman.

The Peabody Chamber Opera has been a resident company at Theatre Project for about 15 years, after some time away from the venue they return in full force. The eleven piece orchestra were exquisite in each opera performance, they were placed on the back of the stage but could be seen through a transparent curtain separating them from the other performers on stage.

An excellent compilation of operas…

The first opera to be performed was “Sukey in the Dark” music by Thomas Whitman and libretto by Natalie Anderson. If you have ever entered into the world of online dating, you will relate to this storyline. The plot revisits the myth of Cupid and Psyche. Cupid is sent by Venus to make Psyche fall in love with a monster, but it’s Cupid who does the falling. I have never entered the door that says online dating enter here as it terrifies me. So I could understand the consideration in this story that you may fall in love with someone but never actually see their face. Society is filled with unique relationships, so it seems.

All three women were outstanding in this performance, strong voices working perfectly together. Madeline Huss plays Sukey, a shy introvert who looks online for love. Huss’s voice is flawless, a first-year MM in the studio of Ah Young Hong. Laura Snyderman plays Chloe with her bossy and judging nature and her heroic voice. Zoe is played by Rachel Sandler, her voice is mesmerizing and smooth as silk.

The simple yet effective set consists of a couch where the girls talk, giggle and appall about Sukey’s new man. It’s turned to reveal Eros who has been patiently waiting to make his appearance.

Evan Guitierrez plays Eros, while his Baritone voice appeared strong and well controlled for me he was overshadowed in power and eloquence by the voices of the women in the show.

The second opera was “Naomi in the Living Room” music by Johnathan Holland, Libretto by Christopher Durant.

One word! Hilarious. A son only a mother could love, but I am not sure this mother does. It’s that awkward visit to the in-laws we all dread. What’s the difference between in-laws and outlaws I ask you? Outlaws are wanted! Ok, focus.

Arianna Arnold is outstanding as Naomi, mother of John and mother in law to Johnna, yes the names are a clue to how this visit may end. The couple represents two peas in a very awkward pod.  The music flows with energy and flippancy, reflecting the mood on stage.

Keane Ong plays John the mouse-like man who wants to be like his wife in every way, let’s just leave it at that. John holds his own but it no match for the vocal ability of Arnold.
Bailey Jo Hutton’s voice rings out as smooth as silk as she plays Johnna, wife of John and mother of five dead children reliving the horror over and over again, a crazy moment in this opera. I know, kids – death not what you would expect to raise a laugh but it does. We all know at least one member of this family, they may even be related to you.

The final and longest opera comes in the form of “Anon” music and libretto written by Errollyn Walden. As a Brit, I can hear that accent at 100 feet. I was fortunate enough to meet the Belize-born English composer of this work who was in Baltimore to see the performances come to life. She said she held workshops to hear directly from young women about the pressures they confront each day.

Her story arrives in the form of a voice of the people, in this case, the women who are not heard. It’s a substantial piece filled with the reminder of how exploitation of women is very much prevalent in society. The danger of being beautiful and how a step in the wrong direction that could lead to life in the sex trade. A very important opera.

Caitlin Duckworth and Georgia Noonan set the scene leading the way into the world of exploitation and shame. Rebecca Zuniga, Jillian Wiley, and Shurmila Dhar are outstanding in every breath, movement and note they hit. They perform with passion. All dressed in black the girls used beanies to clarify when they were playing the role and reenacting the words of a man. Ingenious and effective.

The set was a pair of curtains, used as the doorway to the journey using light exceptionally well to cast shadows and doubt.

The lighting through all three operas helped to set the scene and create the light, dark, happy, tense and funny moments throughout these three well-performed operas.

Running Time: 2 Hour with one intermission.

“Women in the dark runs through Sunday, February 19th and is a must see. Head to the theatre’s website here for more information and to buy tickets.