Theatre Review: ‘The How and the Why’ at Theater J 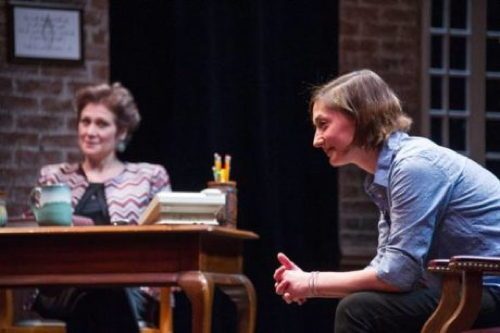 Valerie Leonard and Katie deBuys in The How and the Why. Photo by C. Stanley Photography.

A play about the biological origins of menstruation? When he first heard about it, even Theatre J’s esteemed artistic director, Adam Immerwahr, remembers being skeptical. But as he worked on the project, he became captivated. It’s inescapable how relevant it is, “On the heels of an extraordinary set of marches for women’s rights all over the world, it seems fitting to be producing a play that deals with two generations of feminism through the lens of two extraordinarily brilliant female characters who are making wildly different choices,” Immewahr asserts. Very fitting indeed.

Directed by Shirley Sertosky, the play begins in a new England college town at the very moment Rachel Hardemann, a young graduate student has crept into the office of Zelda Kahn, a brilliant evolutionary biologist, and an engaging dialogue ensues.

In addition to being an award-winning playwright, Sarah Treems is an award-winning screenwriter, her work has been seen in “The Affair and House of Cards,” and the dialogue really makes that clear. Treem’s writing is borderline Shakespearean; two hours with these women passes like two minutes.

Valerie Leonard returns to Theatre J’s stage as Zelda. Her resume is as extensive as her character is nuanced. Leonard commands the stage as Zelda, with an understated and benevolent power. Much like the martyred Hermione in “The Winter’s Tale”, she defends her positions in defiantly boasting that she “refuse(s) to let something so ordinary (regarding sex) define (her).”

New to Theatre J, Katie deBuys plays the impressionable and unsure Rachel. She captures the hostile energy of the character so perfectly, especially in scenes where the character is explaining her scientific reasoning.

Paige Hathaway, whose designs include the gorgeous Alabama Delta of Signature Theatre’s “The Gulf” and Theatre J’s own Camp Kickapoo of “Another Way Home,” designs the set. Martha Mountain designed the beautiful lights of the bar scene and Zelda’s office.

Danielle Paterson, who designed costumes for Theatre J’s “Christians,” designed the costumes. Psychedelic pink and purple for the decidedly feminine Zelda, and blue for Rachel, who resists her femininity.  She also alludes to both characters sense of power and to their relationship to each other in their choice of footwear.

Why do women menstruate? Why do women go through menopause? Is there more than one kind of feminism? Does our nature or our nurture determine who we are?  These and similar uncomfortable questions are posited by this unapologetically truthful play. As Immerwahr points out “timeless questions that women will continue to examine for many generations to come.” But through these questions and the act of teasing out the answers, Theatre J and Treems manage to turn science into poetry: Shakespeare, or Millay.

“The How and the Why” runs from February 15- March 12, 2017 at Theatre J. For more information on upcoming shows at Arena Players, call the box office at or click here.