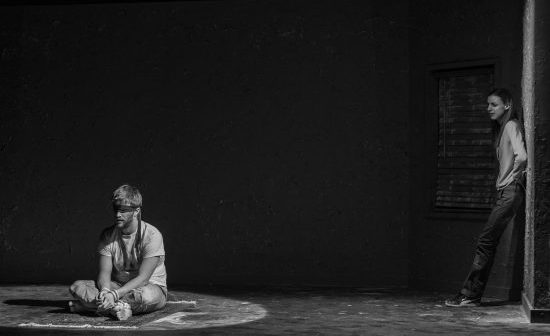 “It’s a world of crime and we call it work so we can keep on doing it.” Themes of hope, fear, terrorism, freedom and the power of love abound in Kensington Arts Theater’s production of “Two Rooms,” now playing at Kensington Town Center.

The small cast, coupled with the intimate performance space, makes the audience feel like a part of the action…

Michael (Sean Dynan) is an American professor who has been captured by terrorists in Lebanon. Hundreds of miles away, back in the United States, is his wife, Lainie (Caity Brown), who strips his home office bare in order to try and feel closer to what her husband is experiencing. She is flanked by a reporter, Walker (Dave Gross), and a representative of the U.S. State Department, Ellen (Sandra Cox True), both of whom say they are acting in  Lainie’s best interest, but neither of whom she thoroughly trusts. Her only moments of comfort are spent in the empty room, where, through a combination of hope and imagination, husband and wife can talk again. As weeks become months, and months become years, Lainie becomes increasingly desperate for action and increasingly frustrated with the lack of response from the American government. This causes her to act on her own, though she is terrified of the unknown consequences of this action.

“Two Rooms,” written by Lee Blessing, was first published in 1990, but the themes and questions it raises are just as topical and relevant today. It asks the audience questions like, “What does it mean to be an American?” and “Is the safety of the many more important than the safety of a few?” One of the strengths of this piece is that there are no easy answers offered. While Lainie only physically interacts with Walker and Ellen, the show utilizes techniques like slideshows, monologues and even a dream sequence so that Michael can interact with Ellen and, of course, Lainie.

Brown and Dynan anchor this piece with a connection that transcends the horrible situation in which they find themselves. The fact that the audience never sees Lainie and Michael together in a typical way makes the incredible bond you feel between the characters even more impressive. Gross and Cox True both add complex performances, as the audience tries alongside Lainie to try to figure out if they are friends, or acting solely in their own interests. The small cast, coupled with the intimate performance space, makes the audience feel like a part of the action and increases our culpability in the final result.

“Two Rooms” is very effectively directed by John Nunemaker, highlighting the moral ambiguities and complexities of a situation that is, unfortunately, still relevant in today’s world. The costume design (Hannah K. Herold, Hayley Brown) was also incredibly impressive, with Walker and Ellen frequently changing clothes as time passes, but Lainie and Michael staying in the same clothes – highlighting how they are stuck. Michael’s clothes, while they stay the same, also show signs of deterioration as his captivity continues. The stage design, while seeming deceptively basic, actually provides the vehicle for the complex character interactions that occur (set design by Dan Patrick Leano, production design by Jeff Clausen). Overall, this production is a highly affective and moving piece of theater which makes the audience ask itself tough questions, where the results can be truly life or death.

Running Time: Approximately 2 hours and 15 minutes with one 15 minute intermission.

Advisory: Due to the adult subject matter, this show is recommended for adult audiences.

“Two Rooms” is running now at the Kensington Town Center in Kensington, MD with performances on February 24th, 25th and 26th and March 3rd and 4th. Friday and Saturday night shows start at 8:15 pm, and the show on Sunday is at 2:00 pm. Tickets can be purchased here.