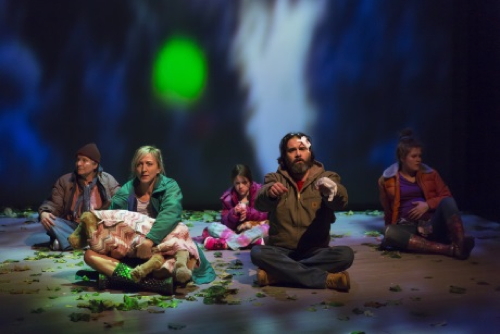 If you’ve ever stood outside during a thunderstorm, you’ve probably experienced fear at nature’s violence, or awe at its power, or perhaps both at the same time. In Clare Barron’s play, “Baby Screams Miracle,” a family in rural Washington State grapples with these feelings as a tremendous storm ravages their home and community.

“Baby Screams Miracle” is about miracles (some may call them coincidences) in our lives. It’s about a family whose members struggle to understand one another and the uncertain world in which they live. As their house falls to pieces, the family turns to faith and prayer for something constant to hold on to.

The acting in ‘Miracle’ is excellent.

The storm that rages throughout the play is one of the strongest characters. Video Designer Jared Mezzocchi, Sounds Designer Palmer Hefferan, Lighting Designer Autum Casey, and Scenic Designer James Kronzer came together to create a truly terrifying beast of a storm. The damage to the house is even represented on a micro level with a sort of dollhouse version of the home, which is present onstage for most of the play. At times, this mini house is lifted into the air, like Dorothy’s home in “The Wizard of Oz.” Lighting by Casey lends an air of realism, as most of the performance is lit by flashlights, candles, and even glow sticks. Costume Designer Tyler Gunther makes characters seem familiar. These characters could be our friends or our own family.

The acting in ‘Miracle’ is excellent. Kate Eastwood Norris is the spirited Carol, and Cody Nickell is the kind and well-meaning Gabe. The couple share funny and touching scenes that explore the complexities of a long-term relationship. Sarah Marshall is wonderful as Barbara, the feisty grandmother, and Caroline Dubberly shines as the strong-willed, slightly lost Cynthia, oldest daughter of Gabe and Carol. Dubberly has the ability to bring humor and realism to a character, as shown in a manic monologue in which she confesses her “sins,” some ridiculous and others recognizable. The very talented Caroline Rilette (who alternates performances with Mia Rilette) played Kayden, the youngest daughter.

I found ‘Miracle’ to be a play that experiments with the typical play structure. It creates a story through moments rather than through a sequence of scenes that builds into a climax and ends in a resolution. These moments don’t always connect to create a linear narrative but are great moments nonetheless. One of my favorite moments is when Cynthia reconnects with her younger sister Kayden. Cynthia has come home after years without seeing her family, so she barely knows Kayden. In a cruel game meant to be helpful, Cynthia coaxes Kayden to be less shy, less like Cynthia. It’s a beautiful and heartbreaking moment.

In a later moment, prayer is used as a window into these characters’ lives. At the height of the storm, the family sits around a candle and prays. Carol tries to teach Cynthia how to pray but may have ulterior motives. Cynthia’s prayer turns into a confession that reveals her many anxieties of the world. Barbara, Carol’s mother, prays for her own mother, who was cruel to her. Gabe prays for his family and to be forgiven for past mistakes. Religion in ‘Miracle’ is less of a theme and more of a tool to learn about the characters.

Barron avoids making neat conclusions in any of these moments. Just when characters seem to understand each other, they pull away. In an interview with Barron printed in the play’s program, Barron explains her attempt to get away from the “American Family Play” where drama unfolds and resolves nicely in the end. At times, “Baby Screams Miracle” does this well. Often, though, this attempt at nuance and metaphor is the play’s shortfall. The characters flip flop on their feelings so much that they don’t change from beginning to end. Perhaps this is why it’s hard to sympathize with them, even at the play’s alarming ending. Despite the poignant moments, the play struggles to come together as a whole.

However, if we see this play as a series of “moments” into a family’s life, it’s quite beautiful. Some of us may recognize our own fears or relationships in these scenes, and isn’t that why we come to the theatre anyway?

Running Time: one hour and 45 minutes, without an intermission.