Theatre Review: ‘Blues in the Night’ at Creative Cauldron 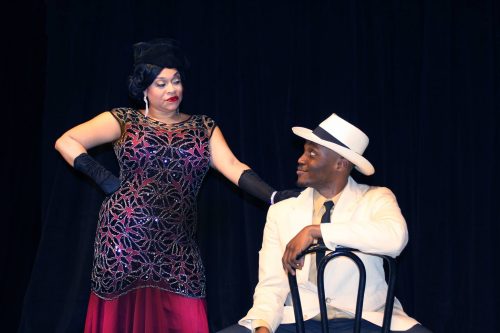 “Blues in the Night,” with its cozy and intimate setting, soulful voices and big performances, transports the audience to a smoky blues club of the past.

Directed by Matt Conner, “Blues in the Night” is not your typical musical. Told almost completely through song, the production does not have a concrete plot. Instead, it focuses on four archetypal characters: The Man, played by Clifton Walker, III; The Lady, played by Iyona Blake; The Woman, played by Katie McManus and The Girl, played by Raquel Gregory-Jennings.

The three women begin the show by singing about falling in love with The Man and fighting over him. Eventually, they realize he has done them wrong, and the songs turn from sexy to sorrowful. Throughout the show, the story becomes less about the relationships the women have with The Man and more about blues’ importance in all of their lives.

All four of the cast members delivered powerful performances, paying homage to blues icons and doing them justice.

Walking into the black box theater, the stage wasn’t what you’d normally expect. The audience’s seats were much closer to the performance area, allowing them to get a close-up view of each performance. Three small tables sat on the floor in front of one circular platform. Directly behind the platform was the band, headed up by Walter “Bobby” McCoy on the piano with Dana Gardner on the reeds, Cyndy Elliott on the bass and Jim Hoffman on the drums. These musicians were a key part of the show, just as important as the cast members. The band’s closeness and visibility contributed to the feeling of being inside of a blues club.

The set and props were simple, with just the tables and chairs and a couple of lighted signs spelling out “Blues Night.” The area left little room for the cast members to move around, but with only four members, they were able to make do.

All four of the cast members delivered powerful performances, paying homage to blues icons and doing them justice. With her soulful voice and sassy air, Blake, as The Woman, proved herself to be the standout performer of the night. With her booming laugh and shouts of “Oh, honey,” Blake didn’t appear to be acting at any point. Instead, she was her character in every way.

Blake also showed true range, with her foot-stomping performance of “Kitchen Man,” which left the audience in stitches, and the emotional “Wasted Life Blues,” which received the most enthusiastic applause of any other number.

As The Woman, McManus stood her ground next to Blake and gave off her own sass. Her powerful and sultry voice took my breath away, and in many of the group numbers, she outshined the other singers. She was a little more reserved than the other performers, but it suited her character well. During her performance of “Rough and Ready Man,” she really came into her own and engaged the audience by singling out audience members as she sang. The song was one of the most fun pieces of the night and had the entire audience smiling and laughing.

Gregory-Jennings rounded out the female cast as The Girl. She portrayed less sass than the other two, and instead, more innocence and naiveté. Her songs were sung with a sweet and airy voice, and she gave every bit of emotion that the other two did.

Walker as The Man, wasn’t what I was expecting. As a man who lied and cheated on these women, I was expecting him to be more serious and mean-hearted. Instead, Walker portrayed him as a fun-loving and happy-go-lucky guy. This was a nice change and made it easy to see how the women could have fallen for this character. As he bounced and grooved around the stage, Walker exuded so much energy, making it impossible to dislike him.

One of the best numbers of the night was “It Makes My Love Come Down,” as the three woman fought over The Man’s attention, trying to win him over. With each woman caressing him, stroking his cheek and curling up against him, the song turned into a hilarious battle.

The songs in “Blues in the Night” covered a wide range of emotions, with some fun and lighthearted, and the others emotional and passionate. But knitted together into this show, the songs told a powerful story, not just of three women done wrong by their man, but of an entire generation for whom blues was a way of life.

“Blues in the Night” plays through March 5, 2017, at the Creative Cauldron in Falls Church, VA. For more information, click here.