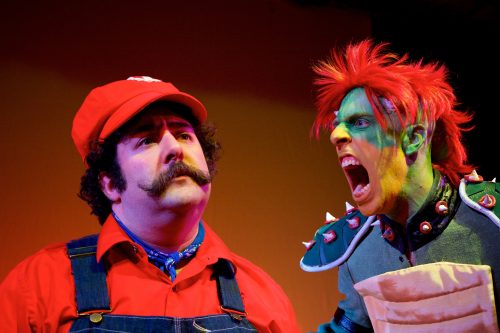 It’s-a Mario! And Luigi, Peach, Daisy, Rosalina, Bowser, and King Boo, battling not each other but an existential crisis of Mushroom Kingdom-threatening proportions in this clever and insightful mash-up of beloved Nintendo characters and Anton Chekhov plays, written with brilliance by Seamus Sullivan for Flying V Theatre.

If you’ve ever picked up a controller and stomped goombahs with the Mario Brothers, do yourself a favor and don’t miss this loving tribute that is both ridiculously funny and deeply reflective.

The plot deals with the characters’ ennui and search for meaning but the play itself is a love song to the entire universe of Mario games and the more familiar you are with the franchise, the more of the detailed jokes and subtleties you will appreciate. I was howling with laughter throughout the entire play, and I was not in the minority! However, even those slightly less familiar with the ins and outs of each game will enjoy this witty and meaningful play; backstories are explained and the play deals with life issues that we all can relate to. Indeed, I was struck by many of the profound truths found in the different perspectives of each character and was reminded that there is more than one way to interpret our life’s meaning.

In the first scene, we find Bowser, played with magnificence by Ryan Tumulty, clad in platform combat boots and a punk spiked army jacket, eagerly awaiting his next combat with Mario. With him are the three princesses: Peach (Amber Gibson), Daisy (Natalie Boland), and Rosalina (Megan Reichelt). For those unfamiliar with Rosalina, look at the Mario Galaxy games. (I warned you, this story is a rich treat for the super-nerds among us!)

Rather than being terrified, the princesses are calmly sipping tea, chatting with Bowser, and pondering the meaning of life as they wait for Mario’s weekly rescue of Princess Peach. Daisy is bored with her life, Rosalina is content, and Peach is concerned that Mario is running late.

Tumulty as Bowser was a tour de force throughout the play. His gravelly roaring voice mixed with his surprisingly refined tastes and debonair manners are a hilarious combination as we discover that there is much more to Bowser and in fact to Peach, Mario, and Mushroom Kingdom economics than we were inclined to assume.

Gibson as Princess Peach is fantastic with her rigid devotion to a set way of life, her relentless positivity, and her truly regal concern for the well-being of her country’s humble citizens. Boland as Daisy brings to mind the annoyed and supremely funny boredom of Aubrey Plaza on Parks and Rec and Reichelt as Rosalina has a wondrous airy-fairy quality of enchantment with life’s simple pleasures.

When Mario, played by Lee Liebeskind, finally enters Bowser’s castle, we are treated to a depressed and gloomy plumber questioning the point of his endless rescuing of Peach from a not-very-malevolent Bowser’s clutches. Before long, his brother Luigi (Grant Cloyd) shows up, chipper and cheery and eager to help his big brother find the sunny side of life again.

Mario’s desire for a change sparks the following scene at the Go-Cart Raceway, where we get to meet the silly and spooky King Boo (JonJon Johnson). Johnson was one of my favorite performances of the night, although each performance was completely delightful. King Boo’s wisdom about life from an afterlife perspective was funny yet relevant, and his costume was absolutely fantastic – not to mention his mastery of a ghostly glide! Well done!

In fact, all of the costumes, designed by Lynly Saunders, were commendable. Each princess had a perfectly poofed dress, complete with cartoony costume jewelry. Mario and Luigi had their trademark overalls and caps, a clear homage to the 1980’s animated cartoon series that had live-action intros and outros, and as previously stated, Bowser’s translation into punk rock attire was fabulous.

The Sound & Music Design by Kenny Neal was on-point and perfectly paid tribute to the effects and music of the Nintendo games. Lighting Design by Kristin A. Thompson and Special Effects by Andrew Barry coordinated flawlessly with the sound to add to the humor of the show. The Scenic Design by Brian Gillick took us adeptly into the world of Mario – think bricks, pipes, and flames! I also enjoyed the little touch of each stage hand being dressed as a Toad.

The attention to detail from the moment I entered the lobby made the entire evening a nostalgic and fun experience. There was a Mario selfie station set up in the lobby, with costumes and background, and a Wii set up for audience members to play Mario games before the theatre doors opened. Even the walkway into the theater was decorated with floating platforms and fire flowers and a symphonic soundtrack of music from the various games played before the show started.

I highly recommend “Brother Mario,” written by Seamus Sullivan and directed by Paul Reisman, at Flying V Theatre. If you’ve ever picked up a controller and stomped goombahs with the Mario Brothers, do yourself a favor and don’t miss this loving tribute that is both ridiculously funny and deeply reflective.

“Brother Mario,” written by Seamus Sullivan, directed by Paul Reisman, and performed by Flying V Theatre, is playing through March 12, 2017, at The Writer’s Center in Bethesda, MD. For more information, click here.