Theatre Review: ‘Caroline, Or Change’ at Round House Theatre 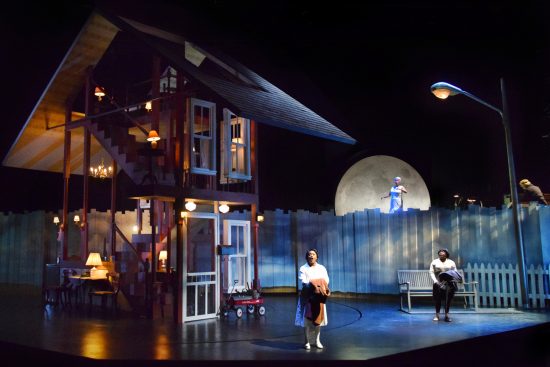 The old saying goes, “the only thing constant is change.” This concept takes many forms in Round House Theater’s suburb production of Tony Kushner’s groundbreaking musical “Caroline, Or Change.”

Set in Lake Charles, Louisiana in the turbulent 1960s,  Caroline Thibodeaux (Nova Y. Payton) works long hours as a maid for 30 dollars a week, a sum she frequently laments is “not enough, not enough.” She is a single mom supporting three children; Emme (Korinn Walfall), Jackie (Elijah J. Mayo) and Joe (Micah Tate), with her oldest son Larry a world away in Vietnam. She is frustrated with her life, feeling stuck working for the Gellmans; a middle-class Jewish family. Young Noah (Griffin McCahill) is struggling with the recent loss of his mother to cancer and his father Stuart’s (Will Gartshore’s) remarriage to family friend Rose (Dorea Schmidt). All three members of the Gellman family are struggling to find their place in the new arrangement, which pushes Noah into a kind of frightened worship of the one constant- Caroline. The meaner she is to him, the more attached he becomes. Things are not improved by the frequent presence of Stuart’s parents (Naomi Jacobson and John Lescault) and their forced cheerfulness.

This superb and deeply emotional production is an absolute triumph.

Caroline is also struggling outside of work. She is intensely envious of fellow maid Dotty (Awa Sal Secka) whose employer not only allows her to dress in her own clothes instead of a uniform but also supports her taking night school classes in pursuit of a degree. She also struggles with Emme’s growing pains, as her daughter expresses her desire for more, both in possessions and equality. Because of this stress, she invents companions by personifying the things she interacts with the most; the Washing Machine (Theresa Cunningham), the Dryer (V. Savoy McLLwain) and the Radio (Felicia Curry, Olivia Russell, and Kara Tameika Watkins.) She also personifies the Moon (Delores King Williams), who she looks longing to every night after escaping the basement of the Gellman house where she spends her days.

There is a great deal of figurative change happening in Caroline’s life, but there is also literal change. Frustrated with Noah’s penchant for leaving loose change in his pants and stemming from her guilt that she cannot pay Caroline more, Rose instructs Caroline to keep any change that she finds in Noah’s pockets when she does the wash. However, this causes the situation in the Gellman house to come to a boiling point when Noah leaves a 20 dollar bill given to him by Rose’s father, Mr. Stopnik (Scott Sedar), in his pants pocket and Caroline declares that she will keep it. Hurtful words are hurled by both, resulting in Caroline fleeing from the Gellman household, horrified at her actions and words to a child. She is then forced to look introspectively and make some tough choices, as giving birth to real change is often painful.

This superb and deeply emotional production is an absolute triumph. The show itself is a truly unique and ground-braking piece of theater, presented in a style similar to Les Miserables; the dialogue and monologues of the characters are presented almost completely in song. It also infuses its poignant story with incredibly eclectic musical styles as varied as blues, jazz, gospel, klezmer and even touches of classical. The already strong subject matter is incredibly enhanced by the perfect casting. Strong performances and even stronger voices abound. Payton’s Caroline is the anchor of the piece and she absolutely shines. Her crystal clear voice cuts you to the heart and coupled with her acting, presents Caroline as a complex figure, fully realized. Her performance was so affective to me that I found myself longing to have seen her in the other shows she listed in her bio.

The relationship between her and her daughter Emme, which formed a significant theme within the show about generational change and the balance of honoring what has come before while pushing forward with audacity, would not have been as effective without the incredibly strong performances of both Payton and Walfall. Walfall hits all the right notes (both literally and figuratively) as a young woman frustrated with her surroundings and pushing hard to create change, both in her own life and in the world. This relationship runs concurrent to the substitute mother role Caroline plays to Noah. Young McCahill infuses a huge amount of depth into Noah and builds empathy with the audience as he struggles to come to terms with a loss difficult for even someone twice his age to deal with. In fact, all of the young actors in this production are outstanding and deserving of high praise.

Sal Secka provides a sort of Doppelganger to Caroline, in that she represents things that Caroline could have but doesn’t: education, employers who are supportive of her dreams and even a romantic partner. Her voice soars as she brings Dotty to life. Schmidt effectively portrays a woman desperate to be loved and to fit in with her own family, in the constant dark from the shadow of her deceased friend. At turns irritating and sympathetic, she turns Rose into a real person before our eyes. Gartshore also turns in an exemplary performance- inspiring both frustration at his seeming emotional distance and then heartbreaking realization that he just does not know how to cope with the loss he has experienced. Cunningham and McLlwain form a sort of Angel/Devil dichotomy for Caroline with the Washing Machine acting as a friendly voice of reason and the Dryer an ominous manifestation of Caroline’s deepest, angriest feelings. The Radio ladies are a delightful riff and King Williams’s beautiful Mezzo Soprano transports you. The rest of the cast is also amazing; every person an integral puzzle piece without which the show would be incomplete.

Equally impressive and integral to this production’s success is the absolutely incredible set. A multi-level house, which rotates to highlight different rooms as needed (scenic design by Jason Sherwood) pairs seamlessly with the highly effective lighting (Grant Wilcoxen.) The costumes were both historically appropriate and expertly chosen and crafted (Frank Labovitz.) I believe that the most successful theater fosters real emotion in the audience – this show caused me to tap my foot, chuckle, think, and even shed a few tears.

I offer high commendations to everyone involved, especially Director Matthew Gardiner on a beautifully genuine piece of theater. It is also worth mentioning that this very moving production is dedicated to the memory of local actress Tricia Lynn McCauley, whose life was so tragically cut short this past December.

Advisory: Due to some adult language and situations, this show is recommended for teens and older.

“Caroline, Or Change” is running now through February 26th, 2017 with performances every day except Mondays. There are also special events for the performances on weeknights. Click here for tickets.