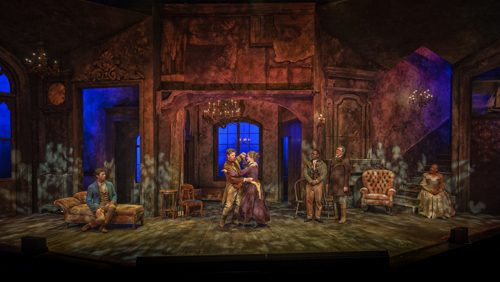 The cast of ‘Great Expectations.’ Photo by ClintonBPhotography.

Playwright, director, teacher and actor Gale Childs Daly has done a brilliant job of adapting one of Charles Dickens’ most beloved novels, “Great Expectations,” for the stage. This seemingly Herculean task is even more impressive since she utilizes only six actors to play 35 characters and condenses the sprawling novel into a two-hour production. Daly also nicely balances the tragedy, humor and hope in this coming-of-age story without losing the essential elements of Dickens’ tale. Theater and opera director Tazewell Thompson, who directed the phenomenal “Ruined” two years ago in his Everyman debut, helms this play. Thompson again creates a production that captivates and engages with the help of a hugely talented cast and creative team. One has come to expect no less from Everyman.

…a production that captivates and engages with the help of a hugely talented cast and creative team.

A familiar Dickensian character, Pip is an orphan in 19th century England. He has been taken in by his cruel older sister (Franchella Stewart Dorn) who is raising him “by hand.” These often unwarranted blows are lightened up as a comic device since it seems everyone gives Pip a good slap until he comes into his new life. His sister’s husband, Joe Gargery (Britt Herring), a blacksmith with the truest heart of gold, does his best to protect Pip – and himself – from his wife’s wrath.

While on the marshes, Pip is confronted by escaped convict, Abel Magwitch (Bruce Randolph Nelson), who scares the boy into bringing him food and a file for his chains. Ultimately Magwich is captured after he is found fighting with a fellow convict. Soon thereafter Pip’s fortune unexpectedly changes when an eccentric rich spinster, Miss Havisham (Dorn), engages him as a playmate for her adopted ward Estella (Elizabeth Anne Jernigan) during weekly visits at her rundown mansion. Pip will later discover that Miss Havisham was left at the altar years ago on her wedding day. The clocks were stopped at that moment and she has never seen the light of day or changed out of her wedding dress since. Miss Havisham is raising Estella to break men’s hearts, as hers was broken. Pip falls for Estella and becomes less and less enchanted with the prospect of following in the footsteps of Joe and becoming a blacksmith. He has “great expectations.”

Six years pass and Pip’s life is again transformed when a mysterious and unknown benefactor provides the means for him to become a gentleman with “great expectations” – all handled through the lawyer, Mr. Jaggers (Nelson). Assuming Miss Havisham has had a hand in his good fortune, Pip goes to London and Estella is sent off to France.

Pip rooms with the studious Herbert Pocket (Gerrad Alex Taylor) with whom he engaged in fisticuffs as a boy during a visit to Miss Havisham’s when the young Pocket insulted Estella. They become fast friends. But Pip falls into the trap of overspending his allowance, getting into debt, and valuing money and station above character. He is soon brought to earth by revelations concerning his benefactor and the return of Estella in his life.

Like any good Dickens story, not all is as it seems. The vast patchwork of characters all eventually interconnect and for Pip, lessons are learned and finally, hard-earned happiness.

As Pip, Drew Kopas does a wonderful job transforming from a scared, abused young boy to an educated and well-spoken, middle-class gentleman. By using his physicality and the careful evolution of his accent from poor working-class to middle-class, we watch him grow and mature into a man before our eyes.

While the five other actors are only credited as Narrators 1 through 5, all of them plus Pip, acted as storytellers and Greek chorus. They accomplished this while also jumping nimbly in and out of multiple characters with a slight change in adaptable and historically accurate costumes, carefully designed by David Burdick. Ultimately it was the range of nuance in voice, accent and/or body language devised by the actors that brought each character to life. It was breathtaking and a marvel to watch as they also moved props and set pieces for the different settings at an astonishing pace.

It would be remiss to single out one actor – they all equally shared the weight of this piece and each outstanding. The two times Pip attends the theatre, the “bad” actors are reminiscent of Shakespeare’s rude mechanicals in “A Midsummer Night’s Dream,” performing a play-within-a-play. They are simply hysterical and it is icing on the cake.

The other character in this production is the set designed by Yu-Hsuan Chen – her first major professional theater project after receiving her master’s from New York University. The concept was to create a visual collage of the places in Pip’s memories – great doors, a parlor, stairs and chandeliers. Complemented by the wonderful work of lighting designer Stephen Quandt and sound designer Fabian Obispo, the organic nature of the set design adapted to each scene and also allowed the illusion of outdoors.

With “Great Expectations,” Everyman has given us another enchanting production that should be seen by all. I highly recommend bringing your children. It is a magical way to introduce – or reintroduce – them to the work of Dickens as well as great theatre.